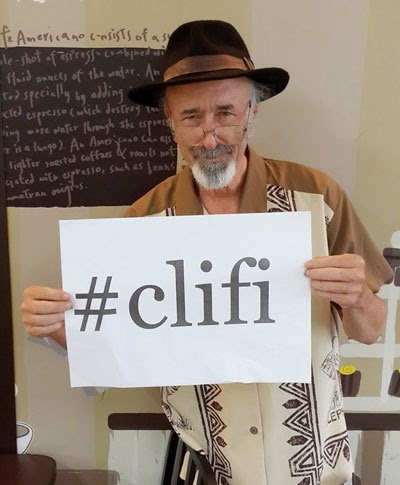 I'm the man who coined the cli-fi term ﻿as a new literary genre platform for writers around the world to use to pen their cli-fi novels about global warming issues, not as scientific treatises but as emotion-filled page-turners about families, people, you and me and our friends and cousins and grandchildren, living in and reacting to the Age of the Anthropocene.
Anyone can write a cli-fi novel, and many have already done so.﻿ See ''Goodreads'' on this. You can try your hand at it too, and all points of view and political opionions and religious viewpoints are welcome, too.
Are you writing cli-fi? Welcome to the future. It's not your grandfather's science fiction; it's the 21st century's most important new literary genre.
So what's my take on what might be the worst-case scenarios ﻿for our Earth in future days, say in 50 or 100 years? Or to be more responsible, in 500 or 1,000 days. Because Doomsday is not coming any day soon, not in 2026 as Guy McPherson lamely predicts to his unthinking cult followers, and not in 2100 as David Wallace-Wells informally opined in a New York Magazine science article ﻿that has gone viral in recent days and been attacked from left and right and praised as well by visionaries and seers as well.
My take? Look, nobody can see the future. We are fine now, things are going swimmingly﻿. All the engines are working, all the machinery is in good shape, and people are generally happy. I know I am. I hope you are too, wherever you are living now.
The future? Look, the End of the World is not on the menu and has not been scheduled yet. But it's true, that with runaway global warming's impact events on the planet and on humankind, we are now skating on thin ice. When we will fall through the black ice and tumble into the frigid waters of the unspeakable end of the human species? Not on my watch.
If it does happen, and it could happen, given the precarious state of the global climate now due to excessive CO2 emissions worldwide, it might happen in 500 years or in 1,000 years and more likely in 5,000 years. So there's time, and there's lots to do and lots to think about, and if we are going to prepare for some kind spiritual doomsday in a distant future, we can start preparing intellectually and spiritually even now.
But nothing is going to rock the boat now. It's smooth sailing for the next 30 to 60 generations of man. And woman. Everything will be fine for the next 1,000 years at least.
So relax. But at the same time, let's prepare for an uncertain future, and one good way to do that is to read or write cli-fi novels that speak to these very issues. The 21st Century is going to be a good one. But it's worrisome at the same time.
James Pinkerton at Breitbart has his own take on the rise of cli-fi in the 21st century, writing in a recent post:

''In fact, there’s already a thriving market for climate-change doom-and-gloom.  Indeed, there’s a rapidly expanding genre known as “climate fiction,” or “cli-fi,” which includes such books as Year of the Flood, The Drowned Cities, and The Water Knife; there’s even a book on how to write your own book: Saving the World One Word at a Time: Writing Cli-Fi.  And of course, there are plenty of movies with cli-fi plots or themes, including The Day After Tomorrow, Interstellar, and Snowpiercer.

And coming soon in October: Gerard Butler in the Hollwood movie Geostorm.

''It might well be the case, of course, that there’s more eagerness, in Manhattan and Hollywood, to supply these works than there is eagerness among ordinary audiences to consume them.  Yet still, the cumulative weight of all this Green-themed content is having some impact—as the polls suggest.


''Yet even if cli-fi can be dismissed as a case of the elite attempting to force-feed its worldview onto the non-elite, we still might be curious to ask: Where did this high-end end-is-nigh impulse come from in the first place?  Why are so many in the upper crust so eager to embrace such pessimism?"
It's a good question. Your point of view?
Posted by DANIELBLOOM at 8:24 PM