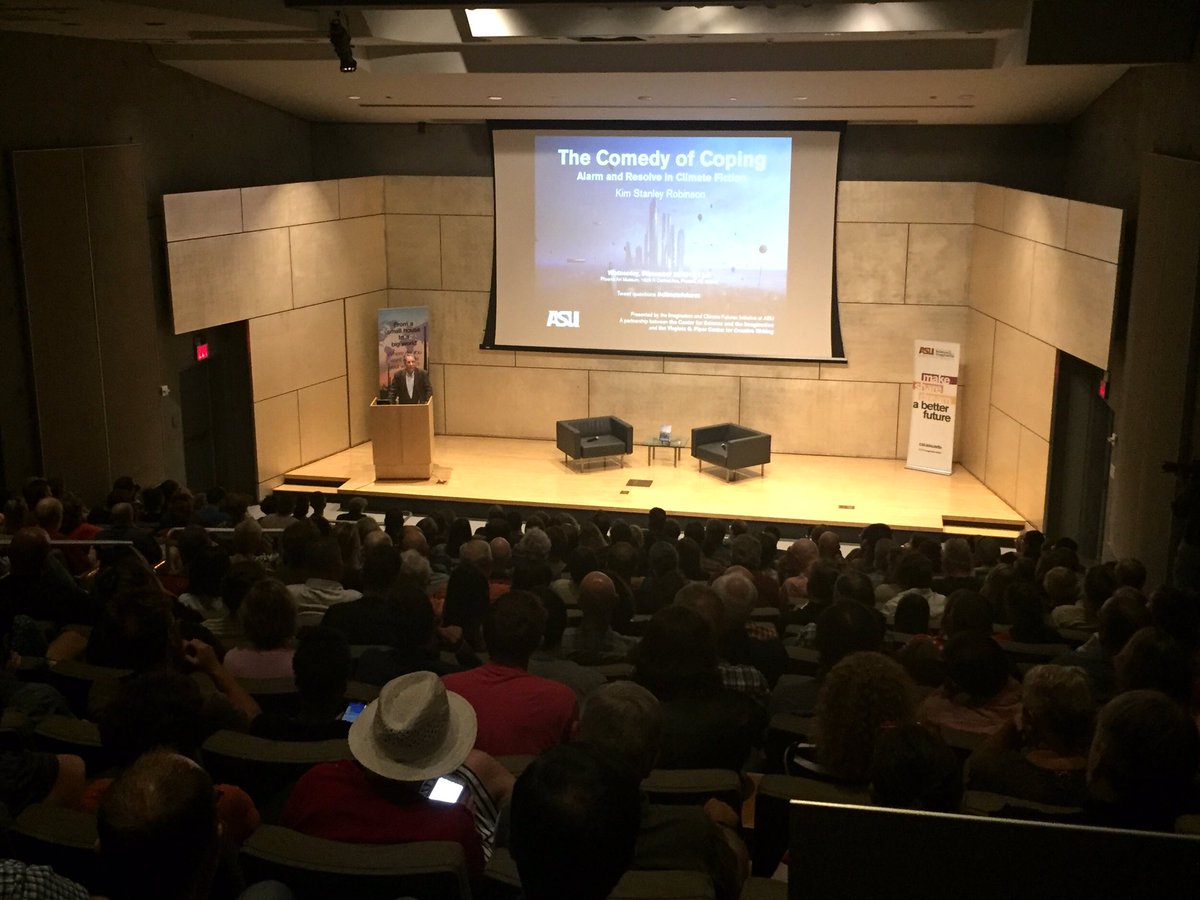 KSR on stage in Phoenix, via live-tweeting....

and OPED by college student on cli-fi https://www.theodysseyonline.com/sci-fi-meet-cli-fi


While science fiction as a literary and movie genre has been around since 1954 -- for over 50 years now ﻿-- and dubbed ''sci-fi'' by the media, climate change issues in the 21st century that we are in now has nurtured a new genre of science fiction that's been dubbed "Cli-Fi."﻿


Climate change has become prominent in headlines in recent weeks with the advent of several hard-hitting hurricanes and typhoons worldwide, as ocean temperatures get warmer and more powerful storms affect a slowly-warming -- drip! drip! drip! -- world.


And these media headlines in the New York Times﻿, the BBC, The Washington Post and the Guardian, have helped nurture a relatively new genre of fiction — more specifically, ''climate fiction,'' also known more popularly as ''cli-fi'' — that focuses on climate change and its impacts events.


﻿
During a recent appearance at the Phoenix Art Museum in Arizona, Arizona State University's Piper Center hosted the New York Times bestselling author Kim Stanley Robinson, who writes both sci-fi and cli-fi now. His talk was called "The Comedy of Coping: Alarm and Resolve in Climate Fiction" and it was well-received by the audience of students, professors and fellow writers.


Robinson's latest cli-fi novel is titled "New York York 2140" and that is what he talked about. An imagined Manhattan set 120 years in the future from now, and a city that is then-submerged under 50 feet of sea water. As you can imagined, all hell breaks loose in the inventive storytelling that Robinson is famous for.

So what happens when sci-fi meets cli-fi? Or as Stan Yang, a friend of mine in California recently asked me: ''When Sci-fi collides with Cli-fi, which will win?"


It's a good question. I told Mr Yang what I am going to tell readers of this blog now: When sci-fi collides with cli-fi, both will win. ﻿Because sci-fi gave birth to cli-fi, and cli-fi now nurtures sci-fi. It's a win-win for both genres when they collide, as they do in Robinson's new comic novel. The result is a kind of hybrid of two standalone, independent genres.


As the 21st century moves inexorably toward the 22nd century -- and onward for the next 1,000 years -- sci-fi and cli-fi will prove to be cousins joined at the hip. Some novelists will call their short stories and novels ''sci-fi,'' while others will call their work ''cli-fi.'' There's room on this Earth (and in literary circles) for both genres in this age of the Anthrocene.﻿


Two genres that matter now more than ever.