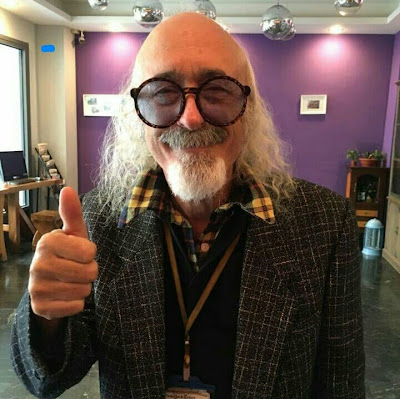 Journalist and climate blogger Danny Bloom, the man who coined the term “cli-fi” (read more about Danny in his interview with Literary Hub). Bloom founded and maintains The Cli-Fi Report, the web’s most comprehensive site dedicated to cli-fi. He is a tireless crusader for the genre, a self-proclaimed “cli-fi missionary.” Here he will discuss what inspired his passion for climate change fiction, why he thinks the term “cli-fi” caught on, and what he recommends you read next.

I graduated from Tufts, class of 1971, as a literature major. I studied American poetry under Maxine Kumin, read a lot of French, Russian, and Spanish lit (studied in Paris my junior year), and wanted to be a novelist. I even wrote one a novel when I was 19. Never published it, never found a publisher, despite submitting it to several book firms in New York. They all passed. After college, I worked in Washington, DC as a freelance cartoonist for The New Republic, The Washington Star, and The Washington Post. In the summer of 1983, out on the West Coast, I got a summer job as the editor of the “Letters to the Editor” section at The Los Angeles Herald Examiner. That was fun!

In the late 1980s I helped run a free weekly newspaper in Juneau, Alaska that I named ''The Capital City Weekly,'' sicne its earlier name The Nickel, just didn't cut the cake anymore. At the paper, I served as editor, reporter, humor columnist, and book reviewer. I moved to Japan in the 1990s and worked at an expat paper called the Yomiuri Shimbun — in the English section where the paper was called The Daily Yomiuri -- I wrote for the English section as a reporter and book reviewer. Then it was on to The Taipei Times in 1999 — I still freelance there from time to time.
In the early 2000s, I taught part-time as an adjunct lecturer in the Taiwanese literature and computer science departments, teaching English composition to Master’s Degree students.
Literature has always been important to me. I’ve read the New York Times Sunday Book Review every Sunday since 1964, and in college was a fan of The New York Review of Books and The Paris Review, back when George Plimpton ran it. I still read Publisher’s Weekly every week — it’s my publishing Bible.

“Cli-fi” came to me after I read the IPCC report in 2006 and was thinking of ways to raise awareness of novels and movies about climate change issues. I toyed with using such terms as “climafic” or “climfic” or “clific”. But I wanted an even shorter term that could fit easily into newspaper and magazine headlines. So using the rhyming sounds of “sci-fi,” I decided to go with “cli-fi”.
The term started to catch on worldwide on April 20, 2013 when NPR did a five-minute radio segment about “cli-fi” with authors Nathaniel Rich (Odds Against Tomorrow) and Barbara Kingsolver (Flight Behavior). That segment reached academics, literary critics, journalists and headline writers. Why did it catch on? For one, I conducted a prolonged, daily, 24/7 P.R. campaign via Twitter and email to reach media people after the NPR story went viral to keep the momentum going. I contacted all kinds of people in the literary world. About 90 percent of them did not respond to my emails or my Tweets. But 10 percent did, including Margaret Atwood and Michiko Kakutani, and that has made all the difference.
I never give up. This is my life’s work now and has been since I first read that IPCC report in 2006. It’s all I do, and it’s all I think about. It’s my life now.

Cli-fi serves as a wake-up call. To quote Sarah Stone, who I believe said it best in a review of Edan Lepucki’s novel California for SFGate: “If we survive—truly, and not in the unhappy ways depicted [in California]—it will be in part because of books like this one, which go beyond abstract predictions and statistics to show the moment-by-moment reality of a painful possible future, the price we may have to pay for our passionate devotion to all the wrong things.”

Both novels and movies are important. Novels are often adapted into movie scripts as we see with David Mitchell’s Cloud Atlas and Annihilation, which is based on Jeff Vandermeer’s novel of the same name. So there is a nice relationship between novels and movies. Movies, of course, reach millions of people with powerful visual impact. But novels are also discussed widely and treat subjects with more depth.

I loved Amitav Ghosh's nonficiton about The Great Derangement. It’s a collection of climate-themed essays from a University of Chicago lecture series, and I not only read them, I watched them on Youtube. It’s a very important book, but he got bogged down in the distinction between genre and literary fiction. He even said to me on Twitter that literary genres with hyphens in them like sci-fi cannot be taken seriously by elite novelists like himself. Dr Ghosh apparently doesn't like hyphens. But Amitavji aside, novelists today don’t care much about such intellectual distinctions. Using words to tell a good story is all that matters. Genre is only important for organizing library shelves. Truly. Story is everything.


I see myself as akind of  ''cli-fi missionary,'' a cheerleader for novelists and screenwriters, a PR guy with media contacts, a literary theorist, and an advisor to novelists seeking publication advice and direction. I get personal emails from novelists wanting to know more about cli-fi and how to place their novels every week.​

​
Some early cli-fi books I recommend: Polar City Red by Tulsa writer Jim Lauder, Finitude by Canadian writer Hamish McDonald, Flight Behavior by Barbara Kingsolver, The Water Knife by Paolo Bacigalupi, and French writer Jean-Marc Ligny’s Acqua TM, a novel in French that should be translated into English. From Germany, I love EisTau by Ilija Trojanow, which was recently translated into English as The Lamentations of Zero. That book is even better than Ian McEwan’s Solar. I’m all in favor of non-English language cli-fi novels. Cli-fi, after all, is a worldwide call to action.
Posted by DANIELBLOOM at 8:58 PM