How the Human World Is Going to End: A Prediction and a Prophecy from a Modern-Day Jeremiah (Dan Bloom's Generous 3000-Year Timeline: Read it and Weep)

UPDATE: This oped should *not* be seen as taking pressure off need to tackle climate change.
- Dan Bloom notes 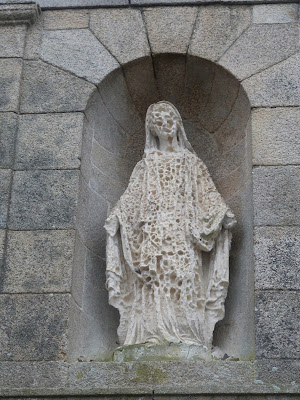 THE MADONNA OF GLOBAL WARMING:
Photo by Sci-Fi Author Yann Quero in France at a church in northeast France near the ocean where the limestone statue has become weather-beaten by, well, the weather....

Q. Why did you write this future envisioning essay?
A. I wanted to leave a message to the deep future before I die in 2025. It's also a visionary oped for the present. Readers can make of it what they will. It's not going to be a cli-fi novel or a sci-fi movie. It's just a vision I wanted to share before I depart the mortal coil.
Do you expect anyone to take it seriously? I mean, you have no credentials, no academic sponsorships, no PhD, no degrees in theology or climate science. You're nothing but an unaffiliated gadfly.
I expect a few people to take me seriously. I'll be happy with ten positive reactions. I didn't write this for mass appeal. I wrote it for those who "get it."
Get what?
Get that we as a species are doomed by our own hand, by our own making, by our own greed and divorce from nature. We blew it. This is what we get. It's a good theme and subject for future clifi novels to explore, perhaps in published novels in 2030 or 2040.
So you wrote this for novelists and movie producers to read?
Yes. It's not for scientists or academics or newspaper editors. For the most part, ther are all frozen to their careers and can't face reality. Or visions.
Do you think you can monetize this timeline?
No way! This is beyond money. Don't you get it yet?
As an interviewer I need to ask questions. I thought you might want to monetize your brand.
I don't have a brand. I'm a one man band banging on a wall that doesn't transmit sound. That's why I chose to release this in print. Words sometimes have wings. Let's see.
One more question. Are you off your rocker?
Well, at my age, I'm just getting used to my rocking chair, an old man's leisure.
So you're not worried about the future of humankind in terns of global warming.?
I'm very worried. But I don't let that stress me out. I'm a very laid back visionary. Take me as you wish. I'm not seeking approval or applause. I'm beyond that.
Oh really?
Yes.
You sound like a very grounded, balanced gadfly.
Thanks. That's my M.O.

AND A COMMENT ON THE OPED BY A TOP LITERARY CRITIC IN INDIA: "While fixing timelines is slightly problematic, changes are already visible. Whether these are major or minor is debatable. Think of resurgent diseases fr example. For those living in low lying coastal zones & small islands the threat is existential & immediate ''
AN ARTICLE IN THE GUARDIAN ON JANUARY 18, 2018 with headline and subheadline:

''Findings should not be seen as taking pressure off need to tackle climate change, authors warn''


So many people are divided into two camps relating to global warming and climate change. There are those like David Wells-Wallace who see the worst-case scenarios and say these events will occur in the next 100 years. He's wrong of course. These events will occur but not for another 500 to 1000 years. See The Cli-Fi Report for details


And then there are those naive people who still cling to hope that technology or God or human resourcefulness will save us from the coming Climapocalypse and these people are also wrong, though bless 'em for their optimism and hopefulness. Remember the late great Walter Benjamin once said "Hope if for the hopeless."


And there's experts like Dr Charles Geisler, an emeritus development sociologist at Cornell University, who has predicted that 2 billion people may be displaced by rising sea levels by the year 2100.


Geisler says coastal peoples will press inland, while farmland off the coasts is likely to be increasingly compromised by drought and desertification. He concludes: “Bottom line: Far more people are going to be living on far less land, and land that is not as fertile and habitable and sustainable as the low-elevation coastal zone... And it’s coming at us faster than we thought.”


Kids now in just 5 and 8 years old  will be in their 80s .... when Geisler's predictions will not come to pass. These kids today can’t, of course, know about any of these possible catastrophes, but we adults already sense that they’re picking up on something subtly fragile and vulnerable about our relatively settled lives together. How do we respond to them? What do we as a parent do in the face of such a potentially bleak future?  How and when do we break news like that? Are we supposed to help our children and grandchildren cultivate a taste for crickets instead of hamburger or start building a solar powered hydroponic farm in our basement? Worse yet, whatever we could imagine suggesting wouldn’t be enough. It wouldn’t protect them. It wouldn’t even prepare them for such a future.


Well, I've been thinking about all thsi for the past ten years, every since the IPCC report came out. And those interviews with James Lovelock. And working on my Cli-Fi Report website as a platform for novelists and movie producers to create cli-fi novels and movies warning us of what is coming down the road. Most people are not listening to me, and I don't blame. It just doesn't compute for most people today in West or the East or in Africa or anyway on Earth. But there are those who do "get it" and I am one of those. Please don't accept me at my words below. Do your own research and come up with your own plans and strategies. But this is how I see the future coming at us and I say this with all due respect for my friends who are still hopeful and want to be optimists. They are wrong. THIS is what is going to happen but I am giving you a generous timeline so don't panic and don't fret, There is still time to prepare our descendants 30 to 60 generatiosn down the road for the End. How to prepare for their End. Our End? It's not going to happen in our lifetime so stop worrying. Write a good cli-fi novel instead about all this.
=======================


So stop complaining. Quitcherbellyaching. We are done for as a species, but not yet, not now, and not any time soon. But yes, the End will come within the next 30 to 60 generations of man (WOMAN) and then it will be all over. What can we do? PREPARE PREPARE PREPARE: mentally, spiritually, psychogically, stoicly, bravely, existentially. This is the truth. All else is wishful "sell those magazines and books" wishful thinking.


My advice to novelists? Write that cli-fi novel now. Soon. There is still time to warn the future.

Posted by DANIELBLOOM at 9:54 PM

Note, actually the End won't come for another 180 generations of man/woman. In your mind, go back in time 3000 to 5000 years. That's about 180 generations back. Now go forward another 3000 to 5000 years from today. That's 180 generations of kids born from now. So there is a lot of time to prepare. I wrote the time line above to show you that there is no need to panic or fret NOW. Go back to your distractions and your Oscar awards and your NFL NBA games and your golf vacations and your weekend tennis matches at the country club and go back to the bestseller list and to arguing over which superpower you think is best to have in this day and age if you were a superhero and forget about where we are headed. Face it, you don't care. You want distraction and cat videos and SciFi escapism stories. That's where we are today. By 2099, more of the same. By 2499, same same. People just don't care. That's why we are in this mess. Enjoy yourself.

A professor on the USA East Coast replies to me by email:


Dear Dan,
While I'm not as apocalyptic as Wallace-Wells or Geisler, I think you're way too optimistic that "nothing major" happens until after 2300, especially regarding sea level.

I'd say three feet is already locked in for 2100 and six feet is becoming increasingly likely, But perhaps you don't consider that "major."

MY ANSWER TO HIM:

Hi Michael. Thanks for reax.

Well, I do consider that major yes, but I don't see it happening until 2300, 2500. I'm trying to get people to see the long view of things. Still, I'm still into doom and gloom, just a longer view than the current popular media gives us. I'm not saying ''do nothing.'' I still hope people will act on climate issues now.

On the other hand, could be 80 more years when the shit hits the fan. Could be. I'm of two minds.
.
Cheers
Dan

PS. Amy Brady is starting a monthly cli-fi newsletter to celebrate her one year anniversary of the cli-fi ''burning worlds'' column. Want details? I can send . free sign up.

Been macdibble in Australia has a good reax to this oped, via twitter, she takes issue with it. I will post her POV tomorrow. Also Wim in Brussels tweeted me "this is utter nonsense."

AND A COMMENT ON THE OPED BY A TOP LITERARY CRITIC IN INDIA: "While fixing timelines is slightly problematic, changes are already visible. Whether these are major or minor is debatable. Think of resurgent diseases fr example. For those living in low lying coastal zones & small islands the threat is existential & immediate ''
AN ARTICLE IN THE GUARDIAN ON JANUARY 18, 2018 with headline and subheadline:
''Worst-case global warming scenarios not credible, says study''
''Findings should not be seen as taking pressure off need to tackle climate change, authors warn''

Many comments coming in to me privately by email, twitter and Facebook messages. But most people don't want their names used here for professional reasons and career plans. So I am not naming names and will always protect privacy when asked to.

Can I really "see" the future? No way. I am envisioning the future, a future I see, because that's what a visionary does. He envisions scenarios and lays them out in broad daylight for all to see. Visionaries are not academics or government bureaucrats or university professors. They envision. I'm an envisionary. This is what I see.