Who will write it and when? I stay awake at night thinking about this sometimes.

To be published soon on her blog and later in the next issue of the Bosphorus Review of Books. 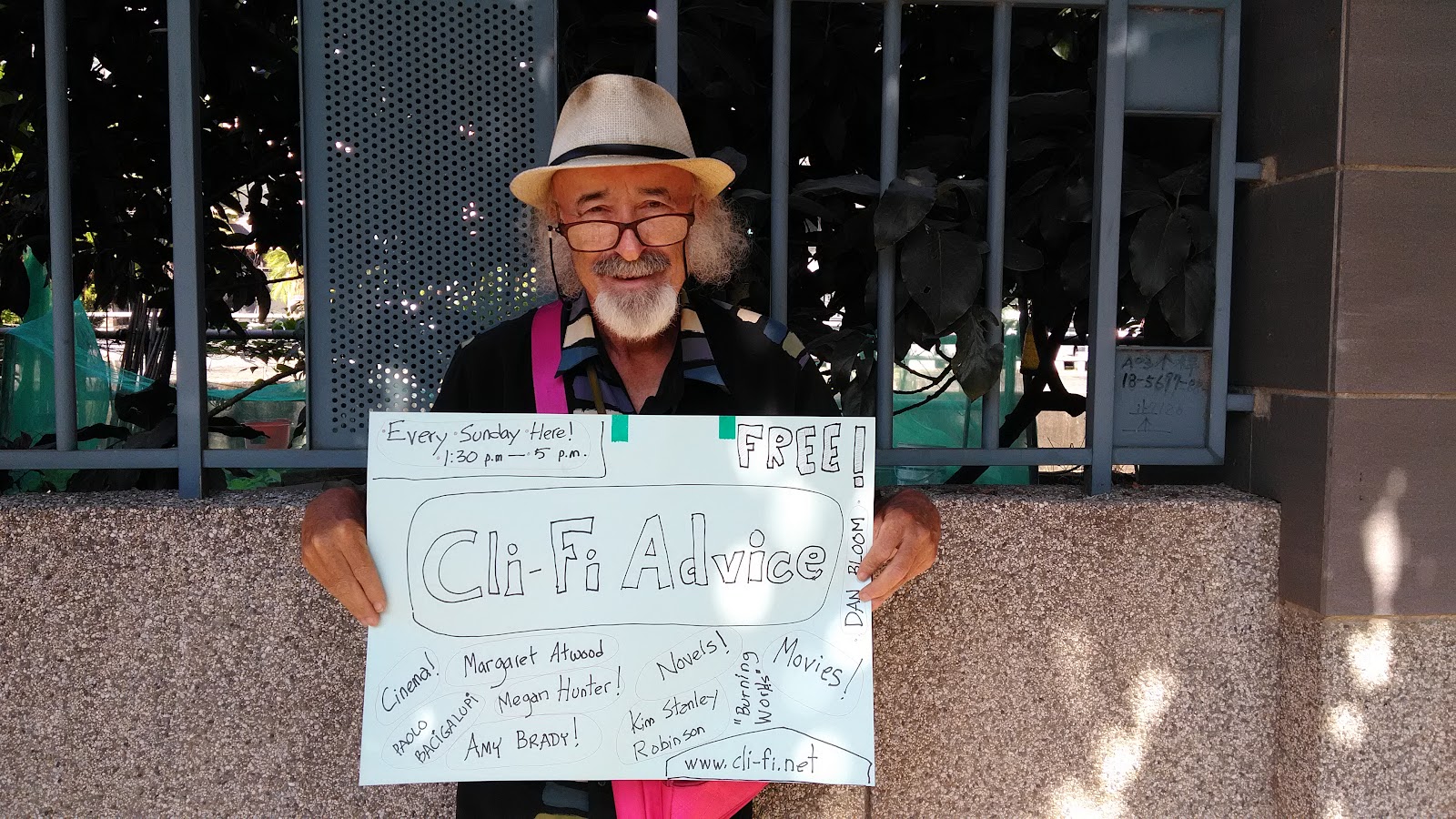 Dan Bloom is a charismatic thought leader who is more active on Twitter than most people half his age. In 2011, he coined the phrase “cli-fi,” now used to describe the publishing world’s trendiest environmental genre. We met online via the Climate Fiction Facebook Group when he found out about an English lesson plan I had created that uses cli-fi to help students learn about book publishing genres. I wanted to know more about Dan’s interesting backstory. Find out how and why he coined the name for this up-and-coming book genre.

Can you tell me about yourself and how you became interested in cli-fi?
In college at Tufts in the 1960s, I was a literature major and had my eyes set on becoming either a novelist or a newspaper reporter. I never wrote that novel, and instead started working for newspapers in New York and Washington DC in the 1970s as a copy editor, proofreader, and cartoonist. In 1979, tired of the rat race on the East Coast, I flew to Alaska and started working for newspapers there. In the 1980s, I was the editor of a weekly paper in Juneau, Alaska called "The Capital City Weekly," which was a free give-away classified ads community paper, and I named it that name from its earlier name of "The Juneau Nickel.'' When I was hired, I suggested a new name and they used my idea to call it the Capital City Weekly. I also lived in Nome, Alaska for two winters and then in 1991 I moved to Tokyo to take a job with an English language expat newspaper there for 5 years. I was again a page editor, a proofreader, a headline writer and a page designer. Then I moved to Taiwan in 1996 and worked for an English language expat paper there in the 2000s.

It was during my work in newspapers that I learned how PR works and how a good eye-catching press release can work wonders. I coined the cli-fi term in 2011 while doing a PR campaign for an American writer in Texas who had written a cli-fi novel titled "Polar City Red." When I was doing the press releases for his book, I used the term "cli-fi thriller" for his novel set in Alaska in a domed city in the near future of 2075. The media in the USA picked up on the ''cli-fi thriller'' phrase and slowly the genre term of cli-fi got used in headlines in NPR, the New York Times, and The Guardian in the UK. I first became interested in the cli-fi term purely as a PR tool for book marketing.
I wanted a new genre as a wake-up call, a warning flare, a PR tool.

How would you define the genre cli-fi?
For years, since the 1970s, authors have been writing novels with climate themes. But there was never a term for them. Since 2011, authors in the 21st century have been writing ''climate change fiction,'' or what I dubbed as “cli-fi,” a genre of literature that imagines the past, present, or future effects of climate change. Their work crosses literary boundaries in terms of style and content, landing on shelves marked “sci-fi” and “literary fiction.” There's Margaret Atwood’s Oryx and Crake or Kim Stanley Robinson’s Forty Signs of Rain. There’s Ian McEwan’s Solar and J. G. Ballard’s 1965 novel The Burning World. Each of these novels, like others in the genre, help us to “see” possible futures lived out on a burning, drowning, or dying planet. But at the same time, there are also many cli-fi novels which are not dystopian stories but utopian optimistic stories with positive endings full of hope and promise.

What are some classic cli-fi novels or authors that would be good starting points for readers who are new to this trend? I recommend two good ones as starting points: Barbara Kingsolver's 'FLIGHT BEHAVIOR' and Nathaniel Rich's Odds Against Tomorrow.

How has the genre evolved over time?
It has evolved since 2013 when NPR did a major segment on the radio network about the rise of cli-fi, where the radio producer Angela Evancie interviewed both Kingsolver and Rich for the broadcast. It aired on April 20, 2013 and the genre took off from there after the NPR story went viral, with follow up news articles in the New York Times in 2014, and The Guardian in 2015. Since then articles and reviews appeared in the BBC website, Slate, Salon, Grist, Treehugger and the Financial Times in London.

The genre continues to evolve as literary critics chime in with their own views of what cli-fi is and should be or could me. Me, I am just a cheerleader for the genre and for its practitioners, the writers. I am all ears. I have no agenda, just to read and listen to all points of view. I suspect that the next 80 years, from 2020 to 2100 will be pivotal for the evolution of the genre. I wish I could be alive to see which way it will go, but I will be dead in ten years.
Also, since your post will appear in Turkey, Mustafa Akkus who tweets at @m_makkus is interested in cli-fi there. He tweeted about the genre last year in Turkish: ''Küresel iklim değişimi ile beraber Science-fiction (sci-fi)roman ve filmlerinin yerini Climate-fiction(cli-fi) roman ve filimler almaya başlada. İklim değişiminin edebiyet ve sinema sektörüne etkisi.'' It was the headline of a newspaper article in Turkey. So there is interest there, too, among academics, literary critics, and climate activists.

Do you think the golden age of cli-fi is upon us? Why or why not?
Yes, these are the early days, now, of the Age of Cli-Fi. Beginning in 2012, when Polar City Red became the first novel to be marketed specifically as a cli-fi novel, I feel the Gold Age of Cli-Fi will really bloom in the 2050s and into the 2090s. We are just at the beginning stages now and it is exciting to watch.

How have you promoted the genre?
I am a born promoter. I am not a novelist at all. But I love PR from my days working at newspapers in Alaska and Japan, and while I never studied PR, I learned about how it works just by keeping up with current news in the publishing industry, mostly by reading the book trade magazine titled Publishers Weekly, or PW. That magazine has been and still is my Bible for book PR. I just followed strategies that seemed successful.
I've used Twitter and Facebook to promote the genre online. In the last 8 years I have written and mailed over 500 press releases to editors of magazines and newspapers around the world. That's my modus operandi, my M.O. I also started a Facebook group page for cli-fi with over 500 members from academia and the writing community worldwide, including several academics from Turkey, among them Serpil Oppermann.
And it's not just me involved in the promotion of cli-fi. Scott Thill, a writer in Los Angeles is the world's most prolific promoter and user of the #CliFi hashtag for environmental destruction news items and fossil fuel destructiveness and man made global warming issues. Everyday, almost every day, 24/7, Scott, a resident of Los Angeles and a graduate of Berkeley (as a grad student in the 1990s) and a longtime writer for Wired magazine and the Huffington Post, among other sites, tweets via @morphizm and many of his tweets use the #CliFi hashtag, created originally by PR consultant Lisa Devaney in the UK as a PR tool for the cli-fi community worldwide.
Do you think more authors will start to market their novels as cli-fi?
For sure. Every week, I get emails and Twitter messages and Facebook messages from new writers telling me that they are beginning to write a cli-fi novel and they ask me for advice on finding an agent, finding a publisher, marketing, PR and book tours. I tell them what I know. So I see a huge future of cli-fi authors over the next 80 years and well into the 22nd century. I have no doubt that this genre is going keep growing and growing.

What is your all time favorite cli-fi book?

You know, my favorite cli-fi novel of all time is not a cli-fi novel at all but it ties in with my work as a cli-fi theorist and promoter. It's that 1957 novel by Nevil Shute titled On the Beach, which was a pulp fiction dime novel paperback from Australia about nuclear war and nuclear winter, and which had a huge impact on world leaders in the 1960s and 1970s. So I am looking for, and hoping for, the On the Beach style of a cli-fi novel about climate change. Who will write it and when? I stay awake at night thinking about this sometimes.

Posted by DANIELBLOOM at 9:28 PM