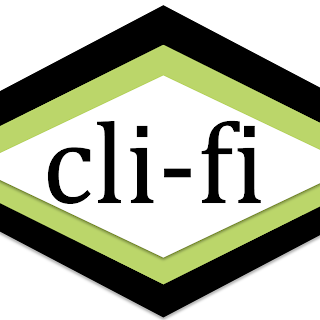 Although the literary genre term of cli-fi has been around in print publications and newspapers for a good 10 years now, the term really resonates best when it is spoken out loud on radio shows, TV programs, podcasts and YouTube videos. In fact, the term is still so new that many people are not quite sure yet how to sound it out when they see it in print.

I like the way rhe term appears in print, but even more I love the way it sounds when spoken on TV, radio or podcasts. Or at taped academic forums available now on YouTube. It sounds like this: "klai-fai" or "klye-fye"

What makes the sound so strong is the first syllable of "klai" since the hard "K" gives a special punch to the term when said out loud. Unlike the sci-fi term which has a soft sound with both syllables, with the "sci" sound sounding like "sigh," cli-fi resonates in a strong, assertive way when spoken out loud as "klai-fai."

That's why I like the cli-fi term when I hear it spoken out loud, in addition to seeing it so often now in print publications online and in newspapers and magazines. Try saying the term out loud right now and see if you can understand what I mean about how strong the term sounds with spoken. It is asking us to pay attention to climate change, and to runaway climate change in particular.

It's 2020 now and cli-fi is set to remain in play as a literary term for the next 80 years at least, all the way up to the year 2100 and maybe beyond. It's part of the 21st century now and it will be part of the 22nd century in 100 more years. It's playing an important role in our culture and our novels and movies. Sound it out! Say it loud and clear! Cli-fi!
Posted by DANIELBLOOM at 11:19 PM