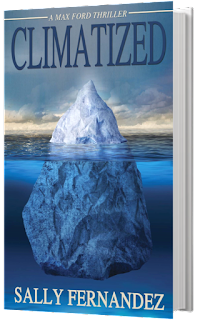 "Regarding the global ''cli-fi'' literary movement, the election of Donald Trump doesn't change a thing. Cli-fi marches on, cli-fi will march on, cli-fi is beyond politics."

Meanwhile.... back at the (academics') ranch

After the election of Donald Trump, some people in the environmental community are not feeling so hot this week.

One of them is PR maven Ann Christiano, the Frank Karel Chair in ''Public Interest Communications'' at the University of Florida. Her role has been to develop at UF a curriculum in the newly-emerging discipline of public interest communications, which uses the tools of public relations and journalism to create positive social change.

"This morning—maybe like [some of] you—I wanted to pull the blankets over my head and block out the news. The election results left me feeling like the experiences and values of so many people I love had been rejected. I wondered how our work could be relevant in a country that accepted a leader who has spoken as this one has.

But when the sun came up, I felt different. We’re not silenced--the world needs our voices more than ever. Our voices won’t be muted by this country’s change in leadership, they’ll be lifted. The coming months will lead to a new, more energetic and dedicated period of activism. As activists and architects of change, our vision will crystallize, and maybe we’ll do a better job of reaching out to those who are different than us. Those who this election rejected will be more inspired than ever to overcome bias and hatred. With many avenues to better policy closed off, we will be forced to drive change through influence. To get people to behave differently not because they have to, but because they want to.

In today’s smallest hours, I felt hopeless. But as the day unfolded, I was overwhelmed with gratitude for your friendship and wisdom and the opportunity to belong to a community of people who can’t help but work toward a world that’s better for everyone. Taking a more inclusive worldview will still leave some beyond our reach. Some will become even more deeply entrenched in their desire to limit the rights and freedoms of others. During the civil rights movement, those were the very people who inspired and sustained activists. The Montgomery Bus Boycott was driven by a mayor who refused to give in to requests of the city’s black citizens as mayors in other cities had. Had he acceded to their requests, Claudette Colvin would not have been arrested, and her case would not have been part of the suit that went to the Supreme Court and resulted in the end of legal segregation on public transportation.

We’ll continue to rally around what’s wrong because we can’t help it. The election results are not a mandate to exclude some from the rights that all enjoy. The mandate is for us. We’re not good enough at advocating for the America we want, and we have so much to learn.

This moment feels like a dark ending to a long story. But maybe the book has more chapters than we thought.

Posted by DANIELBLOOM at 5:26 PM