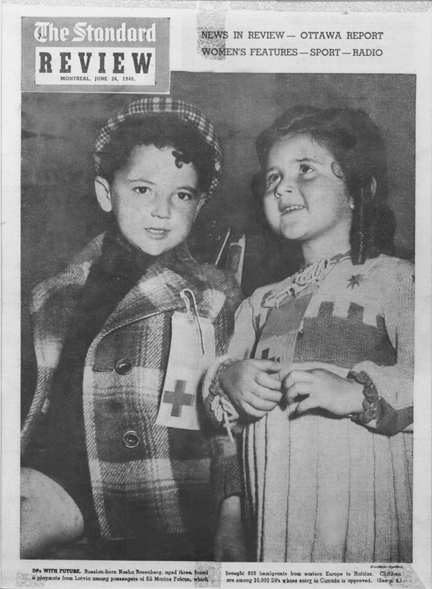 Above is an old black-and-white photograph of Moses Znaimer as a child arriving as a new immigrant Halifax's Pier 21, with the photo later splashed on the cover of a weekly newspaper with the caption: "DP with a Future."

TORONTO -- Take two Canadian offspring of Holocaust survivors, Moses Znaimer and Hindy Nosek-Abelson, and put them in Toronto TV studio and the result will be the first-ever Yiddish translation and group performance of Canada's national anthem "O Canada" just in time for Canada Day on July 1st, which celebrates this year the 150th birthday of the nation.

Hosting the event is Toronto media maven Znaimer who was was born in Tajikistan when his Latvian and Polish  parents were on the run from the Nazis during World War II in Europe. He arrived in Canada in 1948 at the age of six, settled in Montreal and then Toronto, and is one of Canada's best-known media figures.

With his generosity, he has made the facilities of his Zoomer TV studio available for a group sing-a-along of "O Canada" in Yiddish, which will take place on June 6.

Nosek-Abelson, who was born in a DP camp in Europe in 1947, came to Canada when she was three years old, did the translation of the national anthem into Yiddish, with musical direction and piano by David Warrack. The spirited performance, by a large chorus of assembled singers, will be filmed for broadcast on VisionTV in Canada.

On this page (above) is an old black-and-white photograph of Znaimer as a child arriving as a new immigrant Halifax's Pier 21, with the photo later splashed on the cover of a weekly newspaper with the caption: "DP with a Future."

The singing event will start at 6 p.m. on June 6 with a complimentary "l'chaim and a nosh," according to Leanne Wright, the Winnipeg-born PR officer helping to promote the show. The performance will begin at 7 p.m., with "O Canada" sung in Yiddish.


''Yiddish was the first language of most Jewish immigrants to Canada from the late 1800s on," Nosek-Abelson recently told San Diego Jewish World. "While it isn't spoken as a daily language as frequently as it once was, there remains a powerful love for the language shared by many thousands of Canadian people for whom Yiddish was either their own mother-tongue or that of their parents and grandparents.
That explains the overwhelmingly enthusiastic response by a Jewish community eager to pay tribute to the Canada that welcomed them or their ancestors and gave them their very first taste of freedom from Nazi persecution.  To do it in the language they lived, loved, created and flourished in represents a particularly meaningful expression of the gratitude and love for this country that Jewish Canadians share."

"I was born in 1947 in a DP camp just outside of Kassel Germany," she said. "My parents were Holocaust survivors who met right after the war.  They lost everyone in their families except for my father's son from his first marriage. He lost a 10-year-old daughter and his first wife.  He was from Grabov, Poland. My mother, who lost three children all under the age of 10, was from Nikolayev, Ukraine.  Canada gave my parents their first taste of freedom.  And they were eternally grateful and thrilled to be here.  I translated 'O Canada' for them. They would have sung it with great pride."

Nosek-Abelson is a Toronto freelance writer, blogger, dialect coach and lyrical translator of Yiddish poetry and songs. She told this reporter that she feels that while we are taught a lot about how our ancestors perished, we know precious little about how they lived.

So for her, Yiddish songs and poetry offer a perfect snapshot into the everyday lives, loves, struggles, triumphs and joys of European Jewry. Her way of honoring the creative genius of the many Yiddish writers who contributed so prolifically to the dynamic and creative culture that flourished before the Shoah is to transmit their style and creativity to the world. She recently translated a film script for a brand new all-Yiddish film called ''Shechita'' and coached two non-Yiddish speaking actors to speak in perfect mameloshn, she said.

"O Canada" has been sung in a variety of non-English iterations, from French to Spanish. One source in Canada cites a total of 17 translations of the anthem, but with one exception, until now: Yiddish. But that is set to change on June 6 in the run-up to Canada Day on July 1st, when two groups of Canadian Yiddishists debut their versions of the song.One performance will be a solo by Canadian singer and actress Deb Filler, while a second version will be performed by a group choir of Canadian singers to be assembled at Zoomer TV.  Both versions use the Yiddish translation done by Nosek-Abelson. Filler's solo performance will be uploaded to a video website for everyone to see, and the Zoomer TV event will be broadcast throughout Canada and later on will be archived online at the TV station's website.


So with Canada Day just a few weeks away, here are the lyrics in Yiddish.
(c) 2017 Hindy Nosek-Abelson