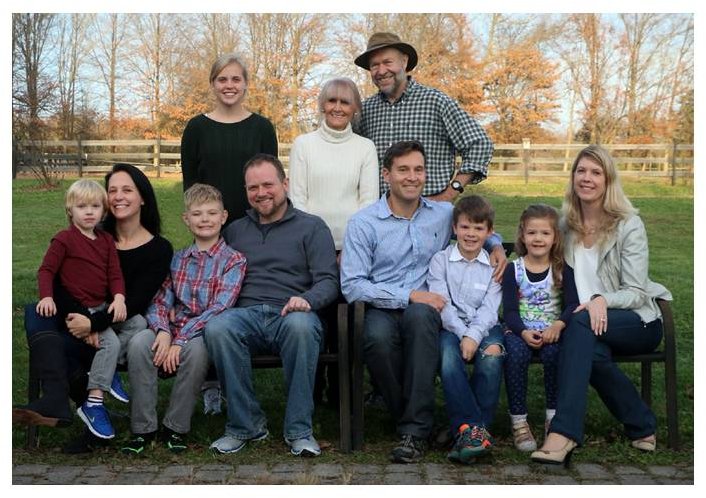 In the photo above, taken from Dr Hansen's website, viewers can see Jim and his wife Anniek in the center, he with the signature hat and she in a white sweater, and just to Anniek's right is Sophie, the college sophomore who is the same Sophie in the book's title. The oldest of the 5 grandchildren, she grew up close to her grandfather and often sat with him to talk science and climate.
On the left side of the photo, there's is Sophie's two younger brothers, Connor and Jake, sitting with their mom and dad -- and on the other side of the photo there's Hansen's son and his wife sitting with their two children. Unless I got the names and faces all wrong, in which case I will correct them as soon as I am corrected.

Publishing sources in New York and London
are already say it's going to be a major book for 2019!

The book, which is a series of heartfelt letters to Hansen's 19 year-old-grand-daughter Sophie Kivlehan, the college sophomore and oldest child of his daughter and son-in-law Christoper Kivlehan, about what we can do about the risks and perils of runaway global warming, and it's a positive, optimistic book at that. 300 pages. Published by Bloomsbury Press on January 22, 2019. You can pre-order it now at Amazon.com and see the details.

As the book was being written, Hansen often sent copies of each letter to Sophie so that she could over his writing and ideas and give him feedback. She's 19 now, a sophomore at Dickinson Colege in Pennsylvania. He's 77 now, and ageless. Still wearing his signature hat -- a wide-brimmed canvas boater.

Hansen's backstory is interesting: he was born in Dennison, Iowa, the fifth of SEVEN children, and the seven kids slept in two rooms in the Hansen house there. Jim's father worked a bartender and his mother took care of the home and the kids. Before going off the college (and worldwide fame as an astro-physicist), Jim as a high school student had a newspaper bicycle route delivering daily copies of the Omaha World-Herald to earn some money for his college tuition. Now Jim and his wife Anniek live in a posh penthouse apartment in Manhattan, according to Seth Borenstein, a reporter for the Associated Press who interviewed him for a major AP story in June 2018.

Jim and his wife also own an 18th century country house in Bucks County, Pennsylvania, where the Hansen clan -- the Hansen son and daughter and THEIR children, including the soon to be famous SOPHIE Kivlehan --  the daughter of Hansen's daughter and son-in-law Christopher Kivlehan -- often get together for family gatherings in the rural countryside.


Wealthy beyond his wildest childhood imaginings, Hansen now takes home $1,000,000 sustainability recognition prizes  that come with climate awards in Israel and Taiwan, among other nations, and he flies all over the world for climate conferences and academic addresses, famous beyond famous, he of the trademark wide-brimmed  boaters hat, bald on top, bearded in front, a long arrest sheet for his various protest activities in the USA, a New York Times front page ''shout out'' in 1988, friends with Naomi Oreskes, Naomi Klein, Bill McKibben, Andy Revkin,  Michael Mann and dozens (hundreds)  of other climate activists worldwide.....and what this blog post is really all about: the proud grandfather of five grandchildren, including ''Sophie'' of the book's title.

Jim and Anniek have a son and a daughter, both married and living in Pennsylvania with their own children. Hansen married  Anniek, a Dutch woman he met in Holland in 1969 when he went there to study at a Dutch research institute for a year. Their meeting in Holland set the stage of their long marriage and a honeymoon in Florida near Cape Canaveral where the couple went to watch an Apollo launch! It's romantic.

So now comes ''Sophie's Planet," perhaps Hansen's last will and testament in terms of books. Perhaps his swan song. Will anyone be listening (and reading)? Will the rightwing climate denialists take new pot shots at him and swing and miss? Wil the New York Times book review review the book? In this age of distractions and popular cat videos on Twitter and the internet, will anyone take notice or care about "Sophie's Planet" and its conTent?

Elizabeth Kolbert wrote a very good profile and Jim and Anniek in the New Yorker magazine in 2009 here. Titled "The Catastrophist," it's worth a read.
http://www.newyorker.com/magazine/2009/06/29/the-catastrophist

''The fifth of seven children, Hansen grew up in Denison, Iowa, a small, sleepy town close to the western edge of the state. His father was a tenant farmer who, after the Second World War, went to work as a bartender. All the kids slept in two rooms. As soon as he was old enough, Hansen went to work, too, delivering the Omaha World-Herald. When he was eighteen, he received a scholarship to attend the University of Iowa. It didn’t cover housing, so he rented a room for twenty-five dollars a month and ate mostly cereal. He stayed on at the university to get a Ph.D. in physics, writing his dissertation on the atmosphere of Venus. From there he went directly to the Goddard Institute for Space Studies—giss, for short—where he took up the study of Venusian clouds.''

''By all accounts, including his own, Hansen was preoccupied by his research and not much interested in anything else. giss’s offices are a few blocks south of Columbia University; when riots shut down the campus, in 1968, he barely noticed. At that point, giss’s computer was the fastest in the world, but it still had to be fed punch cards. “I was staying here late every night, reading in my decks of cards,” Hansen recalled. In 1969, he left giss for six months to study in the Netherlands. There he met his wife, Anniek, who is Dutch; the couple honeymooned in Florida, near Cape Canaveral, so they could watch an Apollo launch.''

Posted by DANIELBLOOM at 9:09 PM

When the book launches, expect a major book promotion tour, with radio and tv interviews on npr and cnn and bbc and abccbsnbc and fox and book reviews in over 100 newspapers and websites worldwide. The goal is to sell 100,ooo copies in hardback and later another 50,000 copies in paperback. Also the ebook edition and an audio book edition.

But in the era of Trump, does this book stand a chance?

The other two grandkids in the family photo are jake and his younger sister lauren, who are the children of jims son (name?) And daughter in law (name?)

Note. Jims first book "storms of my children" was dedicated on the dedication page to sophie connor and jake. But not to lauren and jake the children of jims son. Why did jim leave those two kids off the dedication page? Privacy reasons? Or some other reason, family issues?