Cli-Fi novels are in the air for sure now in 2018, but publishing execs and literary agents don't want to talk about the genre. 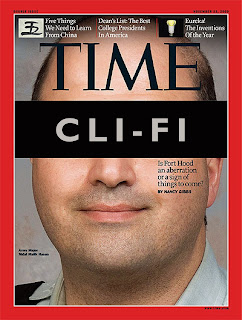 Cli-Fi novels are in the air for sure now in 2018, but publishing execs and literary agents don't want to talk about the genre. Not in public. Not for being quoted. Cli-fi? Their lips are sealed: the acquiring editors, the marketing mavens, the PR departments , the book tour promoters and organizers, the sales reps, the bookstore sales buyers, the publishing CEOs, nobody wants to go public about cli-fi 's future in the book biz.

Try to get any of the movers and shakers in the book industry on the phone or by email to talk about cli-fi you won't hear a peep from any of them. Radio silence. Dead phone lines. Podcasts that never get aired. What's the problem?

If you know any agents or publishers or editors who are willing to talk, give me a holler. I am all ears. I am planning to interview Morgan Entrekin, John Freeman, Pamela Paul, Alexandra Alter, Dwight Garner, literary agent Nicole Aragi and 20 other movers and shakers in the book world. Until then, happy reading.

And: Meanwhile, those of you who writing cli-fi novels, or planning to write a cli-fi novel, don't give up. The publishing world is waking up, slowly. Your work can help! Will help! Will make a difference!

So what if the world is ending and Nat Rich is to blame? Publishing is about profits, not causes or prophecies. Call any major publisher for a quote and they'll hang the phone up right to your face. They ain't taking. They could care less. They're dining on fine fish and lobster wine at the Four Reasons. No time to talk. One publishing exec said two words point blank -- ''not interested.'' I won't say his name . He's revered in NYC and London.

comments:
''Is that in America? Australians are happy to talk Cli-fi. Why wouldn't they? They'll talk about whatever literature the market is interested in.''
Posted by DANIELBLOOM at 9:59 PM