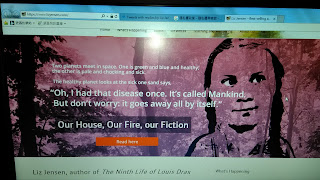 
Last year the American novelist Siobhan Adcock wrote a book industry article for Literary Hub, an industry-wide book website, and her piece listing 9 new climate-themed novels received a lot of play among writers and literary critics worldwide via Twitter and Facebook. She wrote mini reviews of each of the 9 books she selected and the editors added the colorful covers of each book as well to the internet page.

And now that ''cli-fi'' has become a popular buzzword in media and literary circles, with dozens, hundreds, of articles about the genre itself archived around the global internet, in dozens of languges in addition to English, it's time to ask: is the book industry warming up the the genre of climate fiction in the early part of the 21st century, or is the book business still cool the rising new genre?

So just how is the publishing industry taking to or not taking to the cli-fi genre? An American reporter is currently researching a news article on this very subject and she is -- from what I hear -- interviewing ​New York power publishers like Morgan Entrekin as well as literary agents who handle cli-fi books and acquring editors at big and small firms who acquire or try to acquire cli-fi novels.

She is also talking to PR and marketing departments at major and small publishers to try to get a better understanding how these units are warming up to the new genre. The reporter is also interviewing literary critics like Michiko Kakutuni and Amy Brady and Mike Berry to try to learn how they all feel about the new genre as well, while also getting a quote or two from New York Times Book Review editor Pamela Paul.

How do the movers and shakers and players in the book biz feel, one way or another, feel about cli-fi?

In Europe, one novelist, Liz Jensen, has recently penned a 2500-word literary essay about the new genre, titling her piece "Our Home, Our Fire, Our Fiction."

"If climate change challenges the imagination by demanding that we re-frame our relationship to the entire world, then that shift of perception calls for powerful new stories, and powerful new ways of telling them." Jensen wrote. "So, since we are famously a storytelling species, how have the fiction writers of the Anthropocene tackled the rolling catastrophe of a world heading for four degrees of warming in the lifetime of any baby born today?"

She quoted the Indian-American novelist and literary critic Amitav Ghosh of Brooklyn who in a 2016 lecture series and book titled ''The Great Derangement'' argued that literary fiction has been slow to address the issue upon which the survival of our ecosystem depends.

“It’s our job, as writers, to make imaginative leaps on behalf of those who don’t, can’t or won’t,” Jensen quoted Ghosh as saying.

Since Ghosh issued his challenge to world literature in 2016, Jensen wrote, ''the tide has turned: the Chinese curse ‘may you live in interesting times’ has found its moment, and the moment has found its genre: cli-fi."

Jensen added: ''Ghosh's next [cli-fi] novel 'Gun Island' (published later this year) joins a veritable ocean of literature rising to the occasion of our times, while older works such as Maggie Gee’s startlingly prophetic 1998 novel 'The Ice People' are being rediscovered, thanks in part to the increasing surge in interest in the planet’s predicament, and the fictions it engenders.''

Are we a storytelling species? Yes, we are, and climate change fiction stories and beginning to fill our bookshelves and bookstore display windows. It's time. It's Greta Thunberg's time and it's cli-fi's time.

In this context, Jensen argues, "climate fiction is becoming -- all too quickly, the new realism."

I can't wait to to hear what the movers and shakers and major players in the book business in London, Sydney and Manhattan have to say about these new global literary developments, set as they are against the backdrop of annual U.N. climafe conferences and weekly "school strikes for climate" by thousands of teenagers around the world.

Literature matters, my literature professor at Tufts University, Sol Gittelman, told me in 1969, some 50 years ago.

It's still true, and it's even truer today as the 2020s beckon writers to dig in and start tacking climate themes as the spirit moves them. The next 100 years will a new way of writing and a new way of reading. May the force be with you.

''Historians will look back on this era and note its defining paradox: that while the public imagination was increasingly occupied with the dangers ahead, those in power were either in active denial, busy plotting how best to profit from a range of oncoming disasters, indifferent, or -- at best -- doing far too little, far too late.''

''But those same historians may also note that today´s storytellers, inspired by solid science and the evidence of their own eyes, have begun to reclaim the power of the prophets and seers of past ages by resuming their almost forgotten role as the cognitive avant-garde. And that collectively, they bear a message that the world ignores at its peril.''

What will Morgan Entrekin and Michiko Kakutani have to say about all this? Time will tell.