What would it mean for the world if we stopped flying? A good question for the Anthrocene generation as we head toward "a flying finish" 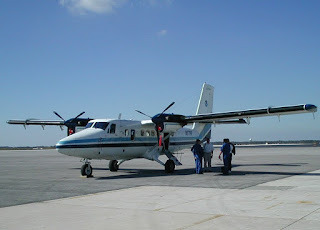 What would it mean for the world if we stopped flying?

It's easier and cheaper than ever to fly across the world, but this is coming at an incredible cost to the global warming impacts of our planet. As a result, an increasing number of people around the world are beginning to think about flying less and taking business trips or vacations in the future by train.

So the mantra for 2019 is ''Cut down on your plane trips!'' One of the most famous activists for this new movement is the 16-year-old Swedish climate speaker Greta Thunberg, who recently attended the Davos World Economic Forum in Switzerland with her father, with the two of them travelling overnight by train from Stockholm's main station to Davos, a journey of 24 hours one way. And they returned two days later the same way -- by train. Greta has trained her mom and dad to stop flying and often tweets about it.

There are even two popular hashtags now on Twitter to call attention and follow this growing movement: #FlyLess and #NoFly

Here's the motto for 2019: Travel is still possible without flying! Even taking one less flight will help drastically reduce your carbon footprint.

In Holland, some universities are also following this worldwide trend.

While some of the academic staff at Radboud University in Holland fly regularly to Paris or London, this is beginning change as the university is making plans to reduce the amount of air travel by staff. While precise figures on the number of flights are not yet available, it is already clear that academic staff fly frequently to Berlin, Hamburg, Paris, London and Munich, cities that can be reached by train in eight hours or less.

'‘We want to start a dialogue about whether we really need to fly to these cities,’' according to Green Office coordinator Thijmen Sietsma. '‘This item is on the agenda at many universities. Leiden and Utrecht, for example, are currently making an inventory of their air travel. I hope that people will think twice before boarding a plane.’'

Sietsma is quick to point out that the idea is not to ban all air travel from now on. ‘'International contacts, of course, are very important for academics but this is at odds with our university’s wish to reduce its environmental footprint. We want to tackle the issue in the right way.''

He says his main concern is to raise awareness about air travel.

''Flying has a massive impact on the environment,’' he explains. '‘It’s something that you as an individual can fairly easily influence. I hope that people will think twice before boarding a plane. They should ask: Do I really have to attend that conference in South America or could I go to a conference closer to home instead?'’

According to climate scientists, there is a reason for this kind of activist movement.

"The IPCC has estimated that aviation is responsible for around 3.5 percent of all anthropogenic climate change. Aviation's contribution could grow to 5 percent of the total contribution by the year 2050 if action is not taken to tackle these emissions, although the highest scenario is 15 percent," sources say.

On Twitter, Emma Richey says: ''Due to the immense pollution caused by airplanes, I'm going to (at least try) restrict myself to no more than 1 flight per year. Let's #flyless and travel by bus or train instead!"

So yes, the environmental impact of flying is a huge blind spot for many people around the world. How about you?

On the BBC website, a news article discusses the two Swedish mothers who want people to give up flying for a year.
Find out why here. https://www.bbc.com/news/video_and_audio/headlines/46362159/the-two-swedish-mums-who-want-people-to-give-up-flying-for-a-year

So far the Swedish moms have persuaded 10,000 people to commit to not taking any flights in 2019.

Their social media initiative, ''No-fly 2019,'' is aiming for 100,000 pledges, and has been asking participants to post their reasons for signing up.

The two women, Maja Rosen and her neighbor Lotta Hammar, say they started the campaign to show politicians in Sweden and other nations what needs to be done to try to halt climate change.

How harmful are you flying habits?

A BBC reporter writes: ''Planes run on fossil fuels, and we haven’t figured out a scaleable alternative. Although some early efforts to use solar panels to fly around the world have had success, we are still decades away from commercial flights running on solar energy. A normal transatlantic round-trip flight can release around 1.6 tons of CO2 -- almost as much as the average yearly emissions of one person in India. This also highlights the inequality of climate change: while everyone will be affected, only a minority of humans fly and even fewer people take planes often.''

So now there are groups of scientists and members of the public who have decided to give up flying or who fly less. Virtual meetings, holidaying in local destinations or using trains instead of planes all are ways to cut down.

For Peter Kalmus, an American atmospheric scientist at NASA's Jet Propulsion Laboratory and the author of
''Being the Change: Live Well and Spark a Climate Revolution,'' there's a plan, which he outlines in an article in the Guardian in London.

His explanation: ''Few people know how harmful it is to fly in planes, including scientists. In 2010, I sat down and estimated my climate emissions. It turns out that, hour for hour, there’s no better way to warm the planet than to fly. I’d flown 50,000 miles during the year, mostly to scientific meetings. Those flights accounted for 3/4 of my annual emissions. Over the next two years, I gradually decreased my flying.''

''Eventually, there came a day when I was on the runway about to take off and felt an overwhelming desire not to be on the plane. I saw too clearly the harm it was doing to the world’s children, to all the beings on our planet. I haven’t flown since 2012, nor have I wanted to.''

Climate activists tend to fly a lot. This sends its own contradictory message, Kalmus says.

On Twitter, Kalmus tweets: ''Reason for #FlyingLess: to raise awareness and shift the culture. It's an emotive action, it gets attention. Also, I don't want to fly anymore, knowing what I know. I don't do it for the market signal or for the direct emissions reduction. I don't think those are significant.''

So imagine what would happen if prominent climate activists like Bill McKibben and Andy Revkin and Katharine Hayhoe and outspoken celebrities and Hollywood movie stars would consciously, publicly, and radically reduce their own fossil fuel use. They could begin by flying less.They could follow Greta Thunberg's example. Hey Leonardo, how about it? Al Gore, how about it? Arnold Schwarzeneggar, how about it?

''Yeah. One can become world famous like Greta Thunberg without flying in six months," says Aarne Grunland on Twitter in Helsinki.

What would it mean for the world if we stopped flying? https://www.bbc.co.uk/sounds/play/p06xgkz0

It's time for American journalists to write about the Flying Less hashtag and follow the example of British and Finnish journalists as they lead a meme to a flying finish.
Posted by DANIELBLOOM at 8:52 PM