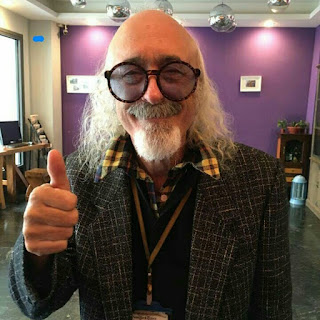 Springfield native walks on world stage with new literary term for the age of climate change: cli-fi
by Danny Bloom
WEBPOSTED October 15, 2019
SPRINGFIELD, MASSACHUSETTS -- I grew up along the banks of the Connecticut River in western Massachusetts in the 1950s and 60s and that has made all the difference. The four seasons, the local public libraries, the excellent public elementary and high schools, and my alma mater Tufts University in Boston.
Massachusetts and its people made me, stamped me, catapulted me into the larger world. I grew up in a very secure and happy place, in a warm and supportive family, and as a result as an adult I became a very confident and happy person and still am. I wake up happy and full of energy every day, even now in my 70s.
As a kid, I delivered the Springfield Union and the Springfield Republican on my newspaper bicycle route to earm some extra money and get my ink-stained hands into the newspaper world. Later, I would become a reporter and an editor in Washington D.C., Alaska and Tokyo. Springfield was my training ground.

So my approach to climate change is with a confident and far-seeing manner. Springfield gave me the tools to become a quiet visionary and then I ventured out to see the world: first France one summer when I was 16, then later after college Italy, Greece, Japan, Taiwan and several other countries. Along the way I picked up some French, some Italian, a lot of Japanese and Chinese and as an elementary school and junior high school student I learned to read and write and speak Hebrew.
Growing up in a Jewish family in Springfield and Longmeadow put me on the path to coining a new literary term I dubbed "cli-fi" much later in my 60s. My Jewish values and worldview are still with me to this day. I loved growing up Jewish in Springfield. It made me who I am today.
I always carried Springfield and Longmeadow with me, no matter where I went. My ''superpower'' is the Pioneer River Valley of western Massachusetts, and the people I grew up with there.

Based as a newspaper reporter and climate blogger in Asia since 2011, I’ve been promoting the rising ‘cli-fi’ movement to boost the literary fortunes of  ‘climate change fiction’, a new genre of literature now accompanying ‘sci-fi’ within modern literature’s classification system.

I’m not a novelist or a short story writer myself, just a reader and what I described as ‘a climate activist of the literary kind’. I use my PR skills learned over a lifetime of newspaper and magazine work in North America, Europe, Japan and Taiwan to communicate my cli-fi passion with editors, novelists, literary critics and fellow readers.

I’m not the only one doing this now. There’s a veritable army of PR people and literary critics shepherding cli-fi novels and short story anthologies into publication in over a dozen languages. What started out as a small movement in the Anglophone world in 2011, has now become a global phenomenon among literary people in India, Singapore, Sweden, France and Australia. among other nations.

So what is cli-fi? As a subgenre of speculative fiction, it crosses the boundary between literary fiction and climate fiction to imagine the past, present, and future effects of man-made climate change, allowing readers to see what life might be like on a burning, drowning, dying planet. But the genre also encompasses writers who pen utopian novels and short stories full of hope and optimism.

Cli-fi is not all dystopian and nightmarish visions of the future. There’s a lot of room for hope and better days, too.

A bookstore employee in Texas named Christine Havens, who I met online, told me that she wasn’t aware of cli-fi being a separate genre until a customer asked her about it.

Google the term ‘cli-fi’ today and you will see over a dozen results updated every week. It’s that popular now, that au courant, that timely. After all, we’re living in the Anthropocene era and literature is bound to reflect that at this time in human history.

While cli-fi novels today include a diversity of titles, some that are dark and dystopian and others that are more speculative, among them Flight Behavior by Barbara Kingsolver, The Water Knife by Paolo Bacigalupi, The Drought by J.G. Ballard and Solar by Ian McEwan. Bacigalupi, a fifth-generation Italian-American lives in Colorado and is married to a woman from India with whom he raises their bi-racial son.

My persistent and determined promotional work over the years is part of the reason behind cli-fi’s growing recognition in the public sphere, as evidenced by copious mentions of the genre in news articles online.

In addition to my literary blog, I am also active on Twitter using the hashtag #clifi and I manage The Cli-Fi Report, a website for academics and media professionals that features links to articles about the genre.

I coined the term ‘cli-fi’ as a wake-up call and a PR tool for climate novelists and media writers, bookstore categories and shelving, and for novelists and literary critics. Over the past eight years, I’ve used the term to alert reporters to writing about the topic for publications including The New York Times, The Guardian, the BBC, CNN, and more.

So often — too often — we as a society separate art and science and teach them as separate categories in schools and in bookstores. Since cli-fi is a literary genre that combines climate science research with climate change novels, there’s a good opportunity for bookstores to be creative with how they set up displays for cli-fi novels. And not just in the U.S. and Britain. Now bookstores in Singapore, India, France and Italy are getting into the act.

Academics worldwide and university classrooms are getting into cli-fi now, too. In India, The Indian Institute of Technology Kanpur has offered classes taught by professor T. Ravichandran analysing cli-fi novels and films to ‘help identify and understand the driving forces causing ecosystem degradation’, according to a course description.

The class looks at popular cli-fi books including Harry Harrison’s Make Room! Make Room! – which explores the consequences of unchecked population growth – and Jim Laughter’s Polar City Red, which looks at life in 2075 in Alaska.

Students also watch movies such as Interstellar, Soylent Green, and The Day After Tomorrow.
Ravichandran says that cli-fi movies don’t accurately portray climate change, and students need to be aware of this. “In fact, such movies get most of the facts wrong, yet they serve a good purpose in presenting the facts in an exaggerated manner,” he told me in an email.

“Cli-fi movies give a much-needed shock treatment to those who refuse to act on what is so blatant. There are already millions of scientific materials available on climate change yet they have not effectively reached a huge populace,” he added.

At the University of Massachusetts in Amherst, Professor Malcolm Sen is also teaching cli-fi classes.

“Climate change, or climate chaos as it should now be called, is an existential threat that can only be addressed by unlearning what we have come to imagine as the good life,” Sen, a native of India now living in the U.S., said in a recent interview for a campus newspaper there.

“The courses I teach, which reflect on some of these inherent contradictions of the climate change discourse, aim to show the radical importance of the humanities, which has been side-lined over the last number of years.”

Professor Sen taught an English 300 course this year called ‘Culture, Capital and Climate’. While climate change is a topic largely discussed in scientific settings, Sen said he sees it as a common motif in literature as well. He uses cli-fi novels, poetry and scholarly articles to discuss it with his students. As a result, his course demonstrates the real depth of climate change — an impending disaster that is being discussed by novelists, scientists, Hollywood actors and pop singers alike.

While climate change is an issue that affects all of us, Dr Sen says that some communities are affected by it more than others, and the Global South — made up of regions at and below the equator — has been dealing with the effects for years.

“When Hollywood was dreaming up alien invasions a decade ago, many communities in the South were already experiencing an unfolding apocalypse; extreme water shortage, food scarcity, unrelenting heat, turbulent storms and rising seas that engulfed entire islands,” Sen said.

In Singapore, at NUS-Yale University, professor Matthew Schneider-Mayerson, also teaches and researches cli-fi. He recently published an empirical, academic study that shows how cli-fi novels impact readers, pro and con. Some readers, according to the study, are energized and touched by such novels, while others are left feeling ambivalent.

Arindam Basu is a professor at Canterbury University in New Zealand, where he has lived for many years after immigrating fom India. He also teaches cli-fi classes there and finds that his students respond positively to the classroom discussions, he told me in a recent email. He has also translated into Bengali a cli-fi short story by Canadian writer Margaret Atwood and published it on a Bengali website, he told me.

So from Springfield to the world, cli-fi is now making waves worldwide.

Dan Bloom graduated from Tufts University in Boston in 1971 with a B.A. in modern literature. He has worked as a newspaper editor in Alaska, Japan and Taiwan and is now retired and devoting himself fulltime to promoting cli-fi worldwide. He can be reached at danbloom @g mail.com or on Twitter at @TheCliFiReport.

See cli-fi book lists curated for Five Books and LitHub. Media sites like Book Riot, The Verge, and The Guardian are among many that have created top cli-fi book lists for their readers.
Posted by DANIELBLOOM at 11:59 PM