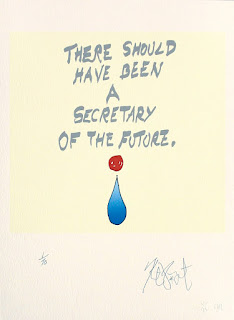 THIS FLOATING POST HAS BEEN SLIGHTLY EDITED
FOR CLARITY AND AMPLIFICATION

AS EDITED BY OUR STAFF WRITER

Berkeley CALIFORNIA in the early 1970s was a hotbed of hope. For Ernest Callenbach, a White science book editor, the hip and trendy city’s utopianism stood in stark contrast to reality. The scientists he published at the University of California Press were predicting environmental collapse from pollution and wildlife extinctions. Meanwhile, his marriage was unraveling. And yet Callenbach didn’t give in to despair; instead, he decided to remake the world.
Callenbach wrote an odd, awkward little cli-fi novel called Ecotopia, about a near-future separatist nation comprising Northern California, Oregon, and Washington. Ecotopia was run by a female president, and its technology was entirely renewable, with an internet-like network linking everyone and carbon-neutral public transit. The region’s prisons had been shut down by Black activists and its economy converted into a stable-state system inspired by recycling. Involuntary homelessness was impossible, because giant 3-D printers extruded biodegradable buildings at no cost. Plus, everyone, Black and White, straight and gay, was having great, consensual sex.
Nobody wanted to publish the book. New York publishers thought it was too political and not very well written. According to a California literary critic, Callenbach had painstakingly fact-checked the science in the book, sending out each chapter to researchers for feedback. Unfortunately, he didn’t take the same care with his characters, who feel a little like wooden chess pieces moving through a narrative version of today's 2020 Green New Deal.
And yet Ecotopia struck a chord with counterculture people hungry for a new vision of the future that didn’t involve scifi robot servants and scifi flying cars. Callenbach raised some money from friends and self-published 2,500 copies. The rest is a piece of nearly forgotten ''climate fiction'' history. He secured an endorsement for the book from Ralph Nader, who later ran for USA president on the Green Party ticket. Ecotopia sold almost 500,000 copies in the late 1970s, and the book’s political ideals strongly influenced activists, futurists, and environmentalists. And the counterculture of hippies and visionaries.
Callenbach’s blend of environmental justice politics and science visionaryism was  characteristic of a utopian strand of cli-fi with roots in America. Ursula Le Guin and Stan Robinson are key figures in this tradition. As writers, they’re ruthlessly hopeful, imagining how humanity could right historical wrongs and build better societies in the long term. None of them try to conjure anything close to a perfect world—indeed, they often conjure horrific disasters—but their novels take us off the well-worn pathways that lead to dystopia and apocalypse.
Taking the path less traveled can be rough. Utopian writing has a bad reputation, mostly because it’s not particularly interesting to read about things that are going well. That’s why Le Guin and Robinson often focus on multigenerational narratives in which conflicts break out and get resolved over time.
The extended time horizon also becomes a useful device in Robinson’s cli-fi epics 2312 and New York 2140, which turn the slowness of the carbon cycle into action-packed adventures about coping with climate change.
Posted by DANIELBLOOM at 10:09 PM