The Great Awakening: a personal take on Amitav Ghosh's new climate change essay collection from the University of Chicago Press


Lecture 1, ABOVE VIDEO
and Lecture 2 here
The Great Awakening: a personal take on Amitav Ghosh's brilliant ''new'' climate change essay based on his four 2015 U.C. college lectures from the University of Chicago Press

First of all: the book will likely reach two main audiences: United Nations IPCC COP 22 climate policy wonks, and assorted climate scientists in state-funded think tanks and universities around the world......AND.......literary critics of all stripes and ideologies in India, the UK, the USA and Australia

Now for my take, with book in hand:

1. It's a great, brilliant, essential and important book about climate change and the ''GREAT AWAKENING'' taking place now among activists around the world, among them Bill McKibben and Leonardo DiCaprio, in terms of creating novels and movies that tackle, head on, climate change issues in sci-fi, cli-fi and spec-fic novels and movies.

2. It's a slight book, even in the hardback edition, about the size in terms of height and width to most paperback books, and the three main chapters are for the most part a rehash of the four Berlin Family Lectures that Ghosh was invited to give at the University of Chicago in October 2015 and rewritten and amplified with over 200 footnotes -- called END NOTES in the bool -- and while it's a slight book, it's also heavy, as in "Yeah, man, what he is saying is heavy, very heavy!"

3. The chapters on politics and history are pitch perfect.

4. The chapter on how Western novelists and movie producers have been tackling climate issues was poorly researched and dropped the ball all the way along. In fact, Ghosh should have called the book THE GREAT AWAKENING, because in fact, that is what has been doing on in Western literature, vis a vis climate change and man made global warming since the 1960s. He hardly mentions this. Oops. In the lectures, he also hardly mentioned it. Double oops.

5. Throughout the entire book, the word EARTH, which stands for the name of our dear home planet called Earth, with a capital E, has been lowercased by the editors, probably in keeping with the style guide of the University of Chicago Press. Alan?  In a book like this, about protecting the Earth, it is a serious mistake to lowercase the word as "earth" throughout the entire book. Wrong, wrong, wrong. I wonder what Dr Ghosh will have to say about this when he finds out?

7. The Great Awakening is a wake up call for humanity and a wake up call for novelists and screenwriters in the West and in India and worldwide -- Africa and South America and all of Asia, including communist China and free democratic Taiwan, and ''cute'' Japan, too -- to continue waking up and using their skills and talents and voices as artists and writers and poets and film directors and climate activists to keep doing that they are doing: tackling these isuses with their art. So they book is not really about any grea derangement. It's about THE GREAT AWAKENING. Think about that as you are reading it.

[8[. [One irony of irony things that has nothing to to do with Dr Ghosh, since I am sure he had no idea and no knowledge of this, but for a hardhitting leftwing tract that takes strong issue with Western imperialism and colonialism, and pretty much pisses on the entire Anglosphere, whatever that is -- read the book to find out -- the Berlin Family lectures at the University of Chicago which sponsored the four lectures that comprise the book's essense and which stipulated that a book HAD to be published after the lecutres BY the University of Chicago Press -- a brilliant PR and marketing move and a good thing, too, because now we have this book in our hands and BRAVO to Dr Ghosh for having written it, despite its few flaws -- but the irony of ironies is that the the USA philanthropy in Chicago that funded the lectures and the book gives SOME of its money to an imperialist and colonial state in the Middle East, and for a book that attacks imperialsim and colonialism ...to be funded by a philanthropy that does just the opposite, supports imperialism and colonialsm in the Middle East -- and I am sure Dr Ghosh knew nothing about this, although the information has always been on the University of Chicago website for anyone to see -- well, look at this: ''Melvin Berlin and his wife, Randy, a retired lawyer and currently a lecturer in law at the University of Chicago Law School, also support 20 post-combat Israel Defense Forces (IDF) soldiers.'']

[Not that it matters, and it's really not interesting at all, and not part of the book's message at all. But we live in an impure world, don't we? Globalization and imperialism and capitalism and all that! Oy!]

aka "The Great Awakening" - #clifipic.twitter.com/TZRp9vt2y9 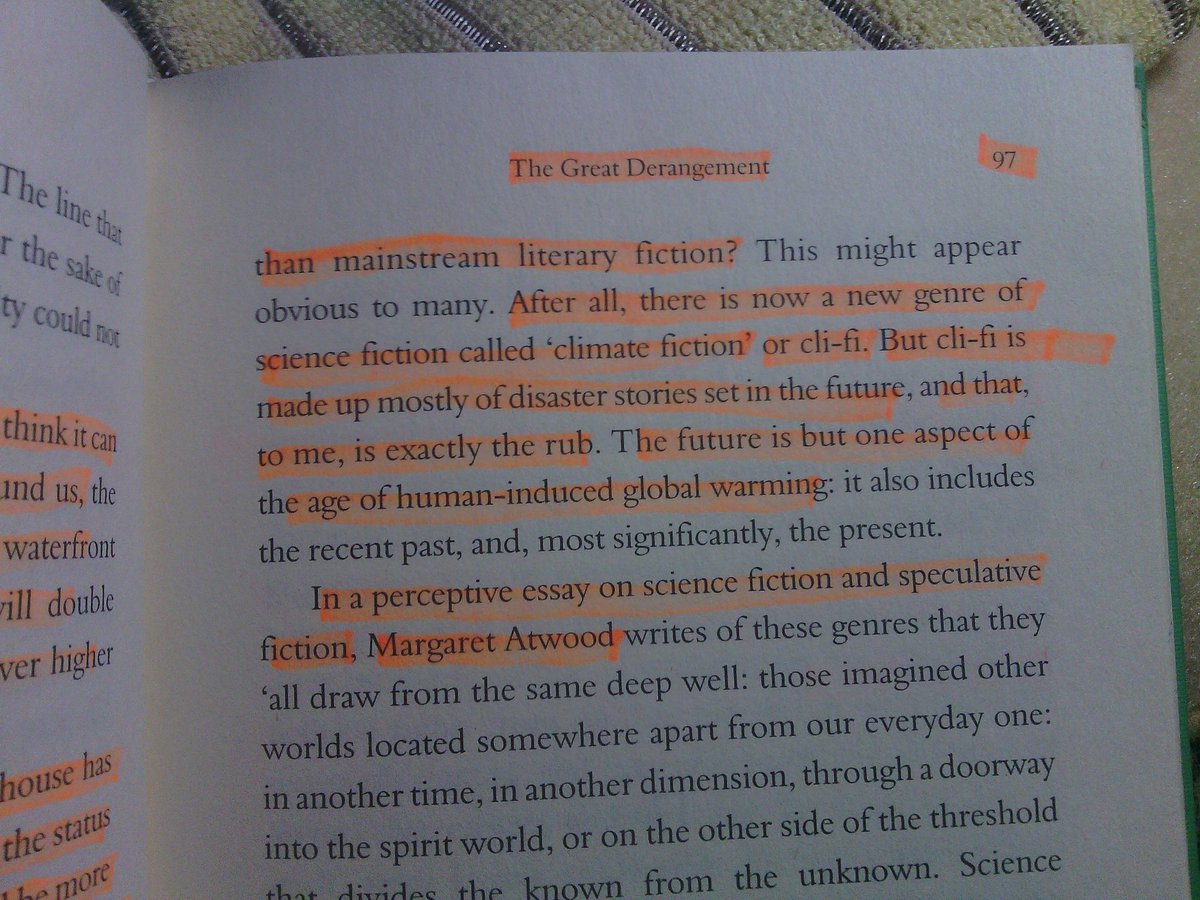 Posted by DANIELBLOOM at 8:31 PM

''I disagree. @GhoshAmitav asks why bourgeois literature has been unable to talk about climate change.''