Cli-fi as a rising literary genre in the MSM is like 水滴石穿 in Chinese proverb: "dripping water penetrates stone" 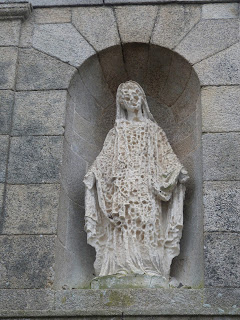 Photo by Yann Quero in France: "The Virgin Mary of Global Warming" outside a church in northern France with weatherbeaten limestone today
水滴石穿

There is an ancient Chinese-language saying "dripping water penetrates stone" which looks like this in Chinese characters "水滴石穿" and is pronounced as
(''shui di shi chuan''). And it sort of means "never give up" or "Remember, Rome was not built in one day" or as they said in Latin ''Romam uno die non fuisse conditam."

The phrase means that grand projects are the outcome of a long period of accumulated and concerted effort., and that if something is worth doing, it's worth taking the time to get it right.
In China, the Warring States period thinker Mr. Shi Jiao, or Shi zi, of the School of Syncretism, is known from the many times he has been quoted in extant texts, even though his own book, the Shizi, thought to have originally been some 60,000 Chinese characters in 20 chapters, has now been lost for 1,000 years.

Shi zi is credited with saying that ''although water is no drill for boring into stone, persistent drops, over time, will cut through rock nevertheless.'' His point was that if one is consistent, methodical and focused on a task, that task will eventually be completed, even if it at first seems impossible, and takes many years of effort.

From this idea, we have the idiom「水滴石穿」, literally “dripping water penetrates stone.”
In the same way, we must remember that while cli-fi is a new literary genre and is still not known by most people in literary circles, it is slowly making itself known as a new genre and with persistence, it will catch on and be as well known as its sister term "sci-fi" (which also took a long time to catch on). See The Cli-Fi Report at www.cli-fi.net for news links.

(thanks and a hat tip to translator extradordinaire Mr. Paul Cooper, at Taipei Times)
Posted by DANIELBLOOM at 7:07 PM