Noted Novelist Jeff Vandermeer says he does not 'reject' the cli-fi term and is 'neutral' on it, at the moment 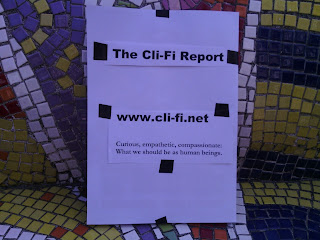 In a recent magazine article online, Professor Murat Cem Menguc ﻿explored the rise of the ''cli-fi'' genre ﻿worldwide, under a headline that read "What Can We Learn From Dystopian Fiction About Climate Change"﻿ that has a subheadline reading: "If you haven't heard of cli-fi yet, you are not alone; however you have probably either read or watched some already."

﻿
Professor Menguc started off his piece this way: "Recently, a friend asked on social media, 'What do you people read to wind down?' He was referring to the distress we all suffer from the endless negative news coming from the Trump administration. I first suggested sci-fi, but upon remembering that he is a lobbyist for international corporations' divestiture from the fossil fuel industry, I decided to do some research on sci-fi novels which focus on climate change. That's when I discovered the so-called 'cli-fi' (climate change fiction) genre."

"If you haven't heard of it yet, you are not alone; most of the people I mentioned it to were unaware of it too," the professor added. "However, you have probably either read or watched some cli-fi already. ﻿A Hollywood movie website IMDB﻿ ﻿has a cli-fi page with more than a dozen titles. The Goodreads list of cli-fi novels ﻿is over 130 titles long.

During the recent months, Lidia Yuknavitch's The Book of Joan, Zachary Mason's Void Star, Jane Harper's The Dry, Margaret Drabble's The Dark Flood Rises, Kim Stanley Robinson's New York 2140, Cory Doctorow's Walkaway, and Sally Abbott's Closing Down have all hit the shelves described as cli-fi. And, since February of this year, the Chicago Review of Books ﻿has published a monthly cli-fi column titled 'Burning Worlds' by New York literary critic Amy Brady that is exclusively dedicated to the genre.''

Professor's Menguc's long article went from there to explore a variety of novels and movies that fit into the rising new genre. But at one point in the original piece, before it was corrected by the editors and appears now online, he incorrectly stated, without fact-checking or vetting the statement which he apparently took from an unidentified online source, that noted American novelist Jeff VanderMeer "rejects the label cli-fi." [BUT THAT STATEMENT WAS OUT-OF-DATE. SEE BELOW FOR AN EXPLANATION.]

"By far the best cli-fi out there must be Jeff VanderMeer’s 'The Southern Reach' trilogy," Professor Menguc wrote in the original article adding, BEFORE IT WAS CORRECTED: "Although VanderMeer rejects the label cli-fi,﻿ this is indeed a story about our changing climate: how a territory called Southern Reach becomes a self conscious ecology, starts to remember, thinking, and communicate with human beings."

Actually, Mr VanderMeer does not reject the label cli-fi now , and asked Professor Menguc to fix and revise that mischaracterization of his current views of the genre: "I asked the professor to remove that opinion about cli-fi from the the part about my work. I told him I had a neutral opinion about it at the moment. I'll email him and see if he can remove it." [Blogger notes: WHICH GOOD PROFESSOR AND HIS EDITORS DID!

It has now been corrected.  It was an innocent and harmless mistake on the professor's part, and in fact  Professor Menguc just wrote to me by email and said told the editor of that piece to fix the mistake as soon as possible, writing "Hi Dan,

Will get in touch with the editor right away.''

Posted by DANIELBLOOM at 7:01 PM