March 4, 2019
LAWRENCE, KANSAS — Where do the stories we tell about the weather come from?

Centuries before the advent of global warming accelerated by industrialization, humans imagined their own actions to bring about weather events. Professor Kellie Robertson of the University of Maryland will take up these timely issues in the annual Richard W. Gunn Memorial Lecture in the Department of English at the University of Kansas. 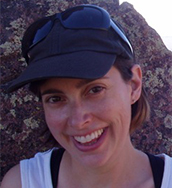 Robertson’s lecture, “Dark and Stormy: Telling Stories about the Weather,” will explore what climate change looked like before the present Anthropocene era, the period during which human activity has been the main influence on the environment. Medieval and early modern writers grappled constantly with how to describe the aftermath of destructive storms. These writers offer a much needed perspective on the present.

Robertson will describe how medieval and early modern writers embodied an odd but enduring position: one in which writers simultaneously imagine themselves as directly responsible for storms and other weather events, even as they experience themselves as being the helpless object of them. Earlier writers, contending with this difficult position, offer a much needed perspective on the climate problems of the present.
Free and open to the public, the lecture will take place 7 p.m. April 1 in Watson Library, Third Floor West.

Robertson is professor of English at the University of Maryland. In addition to numerous articles on medieval and early modern literature and the environment, she is most recently author of "Nature Speaks: Medieval Literature and Aristotelian Philosophy" (Penn, 2017). She is also author of "The Laborer’s Two Bodies: Labor and the ‘Work’ of the Text in Medieval Britain, 1350-1500" (Palgrave, 2006) and co-editor of "The Middle Ages at Work: Practicing Labor in Late Medieval England" (Palgrave, 2004).

The Gunn Lecture was endowed by the late Richard W. Gunn, brother of James Gunn, KU professor emeritus of English and founding director of the Center for the Study of Science Fiction.
The University of Kansas is a major comprehensive research and teaching university. The university's mission is to lift students and society by educating leaders, building healthy communities and making discoveries that change the world. The KU News Service is the central public relations office for the Lawrence campus.
kunews@ku.edu2 | 1450 Jayhawk Blvd., Suite 37, Lawrence, KS 66045

Biography:
Kellie Robertson writes about medieval literature and culture; her research and teaching are premised on the idea that a return to this earlier intellectual history can help us to better understand our own modern desires and philosophical commitments.


Her most recent book, Nature Speaks: Medieval Literature and Aristotelian Philosophy (University of Pennsylvania Press, 2017) examines late medieval poetry in the context of its physics, arguing that both domains struggled over how to represent nature in the wake of Aristotelian science. Whether or not nature can speak in an autonomous voice is a problem with which modern environmental politics still struggles, and Robertson’s book argues that there is value in returning to medieval models of how the human was understood in relation to the rest of the nonhuman world.


Her current book project, Yesterday's Weather: Narrative and Premodern Climate Change, looks at how medieval and early modern societies depict the shock of the natural disaster. While the weather is notoriously changeable, human responses to it reveal some surprising consistencies across time, as each era struggles to respond to the durable dilemma of being subject to forces beyond human control. The stories we tell about weather, both then and now, are almost always stories about our own modernity, but it is a modernity experienced as somehow precarious. Looking back at how premoderns wrote about the weather helps us to understand better the stories that we tell ourselves about climate change today.


She is also the author of The Laborer’s Two Bodies: Labor and the ‘Work’ of the Text in Medieval Britain, 1350-1500, a book that explores textual and material responses to the first national labor laws. These laws—designed to mitigate the effects of the unprecedented labor shortages following the appearance of the Black Plague—forced writers of all kinds to ask what constituted “true labor,” a question that became nearly unavoidable once work became the object of emphatic legal regulation.

She is the editor (with Michael Uebel) of a collection of essays entitled The Middle Ages at Work: Practicing Labor in Late Medieval England.

At the University of Maryland, she currently serves as the Director of Graduate Studies for the English Department.
Expand biography...
Education:
Ph.D.  Yale University
B.A.  University of Virginia
Area Groups:
Literature and Science
Medieval and Renaissance
krobert@umd.edu
Posted by DANIELBLOOM at 9:57 PM