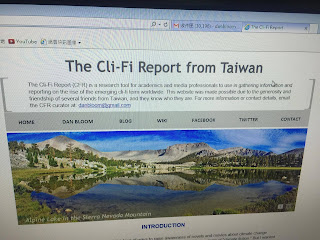 The title of the novel? Says one tweeterer: ''Is that definitely what it's called...? Not just a holding title? Weird...'' and a reply later by someone connected to the book says: "It's not awfully memorable, I agree.''

An unsigned review at Publishers Weekly, a book industry trade magazine, the bible of American publishing, put it this way:


"Setting his latest novel [''New York 2140" set in the year 2140] after a 50-foot global sea-level rise, Robinson, who frequently addresses environmental themes in his fiction, here shows how humanity might move forward after catastrophe -- New York City is still a vibrant metropolis, one in which the streets are canals and skyscrapers are islands.''  Rose Fox previewed the book this way: ''Always the optimist, Robinson finds ways to paint a hopeful picture of a flooded near-future New York City, where rising seas have turned the streets into canals."

''New York 2140'' marks KSR's first main venture into climate fiction, a subgenre of the SF genre he has mined for years. It is meeting the public in this first Year of Trump with high anticipation, with Alex Steffen the futurist noting in a recent email newsletter: ''I'm almost done with Kim Stanley Robinson's latest novel, New York 2140, which comes out in April (if I'm remembering right). [Ed note: March 14 is the release date]. It takes place in a New York City which sea-level rise has turned into an American Venice. I plan to write a review of this, but for now, let me just say that if you're interested in the collision between planetary change, cities and technology, this is a [turning out to be a] great read.''

​Others reviewing the novel will likely include Adam Roberts for the Guardian, Jeff VanderMeer, Gary K. Wolfe (in Locus magazine), James Bradley and Jonathan Strahan. Amy Brady at the Chicago Review of Books in her March 2017 column has interviewed Stan as well for her new column on cli-fi trends.
This is a Big Book from Kim Stanley Robinson. Stay tuned for more news here.​
Posted by DANIELBLOOM at 8:27 PM