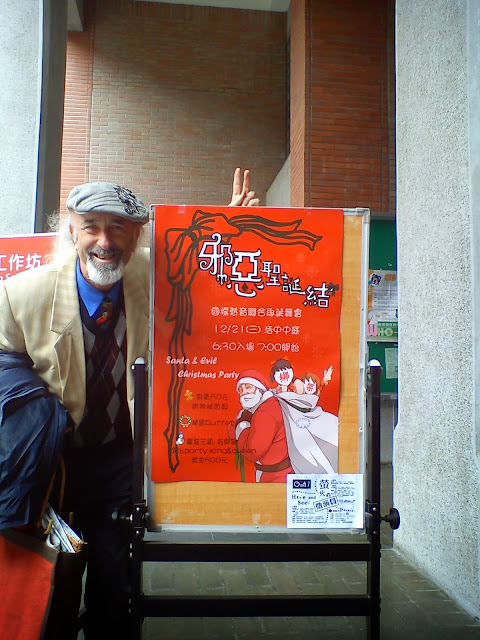 
Look, my life is almost over. I'm in the middle of 68, going on 69 and if I'm lucky, 70. But truth to tell, and I know it in a personal, intimate way, my days are numbered. Heart attack and stent in 2009 and my cardio guy here in Taiwan told me to be prepared. I am. I'm at peace with my 70 orbits (more or less) about the Sun, I've had a very good ride, privileged and blessed, and I have very few complaints. And no regrets.


And now, here I am at the end of my life, saying goodbye. Sayonara.


Cli-fi is my life's work now as a prepare to depart, my parting gift. I didn't create cli-fi term for fame or money or a legacy. I've never cared for those things. I never owned a house or a car, and I'm going to die with no money in the bank, no assets, no investments, no nothing. You won't even read about my death when I pass. Unknown, invisible, living on a subtropical  island in the western Pacific in splendid anonymity, nobody knows my name and I like it that way.


My tombstone, already inscribed, reads: "He came, he saw, he coined cli-fi."


So what about cli-fi? Well, it's still so new that most people have not heard of it yet and it is still a long way from catching on. A few people have heard of cli-fi in Australia, a few more in the USA and Canada and even more in Britain.


After I die, in a few years or so, cli-fi itself will live on and will continue to gain traction and gather steam as a global meme, and I'm totally sure it has a long future ahead of it. Come 2040 or 2060 or 2099, cli-fi will have found acceptance in literary circles worldwide.


And it will last another 200 to 300 years as novelists and film producers explore the stories humans will be telling about climate change and global warming. I spent the last ten years of my life promoting cli-fi in media outlets in a 24/7 rush to get the word out. I did it. My work is over and I can die in peace and contentment. I gave myself a task and I completed it. Not for pay, not for recognition, not for any other reason than to leave something for future generations of man (and woman) to ponder and use as they see fit.


I'll be gone soon enough, dust to dust, from stardust back into stardust, but cli-fi will last, endure, persevere, shed light on what it can, and then after a long shelf life, the cli-fi term will also disappear.
I had a long and meaningful life, with all its ups and downs and dreams and nightmares, and I'm thankful to the two wonderful and nurturing people who put me here in the first place, DNA and all, along with my brother and three sisters, my parents Bernie and Sylvia Bloom.


So come, future generations, and prepare for what's in store for you as the Earth continues to heat up slowly, inexorably, over a long period of time, perhaps another 500 to 1000 years, until, until...well, I won't say it but you know what I'm talking about. Live your life accordingly and pay attention.


I'm outta here. Been a hard day's night. But no regrets. No regrets.


Thank you, Universe, all 8 trillion galaxies of you, all billions of years of you, all gillion gillion stars of you out there in the vastness of the space and the firmament.

Save a seat for me. I'll be rooting for the home team.
Posted by DANIELBLOOM at 7:13 PM