This blog is under construction. 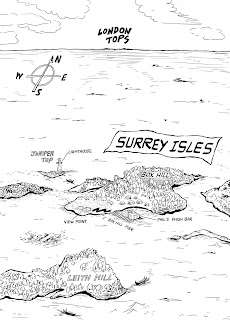 ABOVE: a map illustration from the book

@ChiakiKamikawaMOOJAG2020
Dan Bloom posts an interview here with British-Cypriot autistic
author N.E. Mcmorran on her upcoming debut
cli-fi novel
What is the title of your novel?

Who is your target audience in terms of ages?

It’s a neurodivergent cli-fi adventure for readers 10 years and up. Anyone who has ever identified as different or cares about the world will relate to MOOJAG.

What is the theme?

Set in post-catastrophe Britain, MOOJAG is a quirky story about three neurodivergent friends
discovering a hidden society that threatens their perfect world. It’s ultimately about identity and finding the strength to be your true self.

Is it a cli-fi novel?

It is cli-fi in its setting and underlying message. A utopia meets dystopia with autism themes, about sustainability and the consequences of greed on society and the environment.

MOOJAG is my personal vision of how the world could be, a new social model in which we live in harmony with nature and technology. I invented a wearable sensory computer for my utopian citizens, based on existing science. A protective suit that allows you to live outdoors, and senses your
health and emotions to keep you safe. Imagine a world with no homeless or sick people, no schools or offices.

Neurodivergents are highly sensitive. We care deeply about each other, the world and its animals. It’s not uncommon to hear autistics express they prefer animals to people. People have seriously lost
touch with nature; it’s having a detrimental effect on us. Many species are fast going extinct, food is harder to grow, homelessness is rising, and pollution and needless waste are literally killing us. We
have the heart and tech to solve these problems, we just need people to accept our changing world and prepare for a different one. I’m a positive pessimist.

What was your motivation to write it?

I grew up listening in awe to my parents’ made-up stories, about giant animated rock candy and
greedy fairies who magic-up sweet treats. Sixteen years ago, when I moved to Cyprus, I started
writing a story featuring my father’s ‘Gajoomstiks’. I wrote one page and put it away when someone introduced a TV to my empty apartment. Soon after, I became a mum and started telling my own made-up stories. But when my boy was around 7, I experienced ‘burnout’. After years of unknowingly suffering from anxiety and masking to fit in, I was taking on too much. I was running my own company single handed while trying to transition to an eco lifestyle, sustaining a relationship and supporting my son, who was struggling too. I stopped working and focused on recovery while finding us both help. Then when my relationship ended, I instinctively picked up the
story again. I was about five chapters in when I experienced a transient ischemic attack. We moved to London to get the support we needed, while home educating. Whenever my boy was in a class, I would write a little more and my life and our experiences began to feed the story. And as we went through his assessment, I realised I fit the criteria for Autism and sought a diagnosis, too. Four years later we returned to Cyprus and, with my son back in school, I hyper-focused on the book. I wrote
ten hours every day for the next year, and spent the last year revising and honing the manuscript until I found a publisher who loved it as much as I do. Writing MOOJAG was my catharsis.

In three sentences, give me a short synopsis.

When outsider Moojag introduces Nema to a hidden sugar-hooked society holding lost kids, she discovers her perfect world is in danger. Only she and her friends can decipher a code to stop a rock candy robot invasion and solve the mystery of her long lost brother. But they must also persuade the captives to escape their cruel leader; fail and none of them will make it back to the Real World.
Posted by DANIELBLOOM at 8:13 PM