John Coggin is the maternal grandson of American author John Dos Passos. With his family, he helps curate the John Dos Passos literary estate. He is committed to renewing the Dos Passos legacy for the 21st century

John Coggin is the maternal grandson of American author John Dos Passos. With his family, he helps curate the John Dos Passos literary estate. He is committed to renewing the Dos Passos legacy for the 21st century

John Coggin earned a bachelor’s degree from Yale University and a master’s degree in public policy from University of Maryland. He writes books and articles on politics, environmental policy, and art. He is the maternal grandson of American author John Dos Passos. With his family, he curates the John Dos Passos literary estate. He is committed to renewing the Dos Passos legacy for the 21st century. 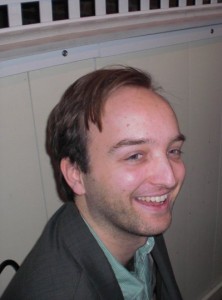 He wrote the text for the official John Dos Passos website at www.johndospassos.com and he currently maintains the site.

His commentary appears in a new Spanish documentary, Robles, Duel in the Sun. The documentary concerns John Dos Passos’ role in reporting on the Spanish Civil War and his friendship with Spanish translator José Robles.

John [Dos Passos] Coggin was born in Annapolis, MD and currently lives in Northern Virginia. He has been a writer and environmental advocate for more than ten years.

He writes nonfiction and fiction. He has published many articles on film, music, books, politics, and public policy. In 2012, he published his first book, Walkin’ Lawton, an authorized biography of Florida governor and U.S. senator Lawton Chiles. He is currently working on new short fiction and a series of essays on film scores.

His environmental career began in 2003, when he interned for the Virginia Secretary of Natural Resources. Afterward he worked for League of Conservation Voters, the Environmental Finance Center at University of Maryland, David Gardiner and Associates, Astrum Solar, and the Richmond Region Energy Alliance. He currently works as a communications specialist at a private firm.


John Dos Passos (1896-1970) is a writer whose work has always meant a lot to me, particularly the U.S.A. Trilogy, with its sustained examination of a changing, radical, early twentieth-century America. So when I heard that the family of Dos Passos launched a website dedicated to his work and life, I wanted to know more. John Coggin, Dos Passos’s grandson, was kind enough to field some questions from me, regarding his grandfather and the new web site. Below is our conversation.

DT: Who has been involved with putting together the John Dos Passos website? Whose idea was it? What is the motivating idea behind it?

JC: My mother, Lucy, has been pushing the idea of an official John Dos Passos website for a long time. In 2000, when Mariner Books released a new edition of the three titles in U.S.A., I think it encouraged my family to think about new ways to promote the John Dos Passos legacy.

In 2010, I believe, we had the first family meeting about a site.

We knew the website project required a top-shelf web designer. In May of this year, we hired a great web designer and I think we—myself, my mother, and my sister—breathed a sigh of relief. We knew the site would have a professional, polished look to match the high-quality content.

Since May, I have worked as communications director for the Dos Passos literary estate. I’ve been writing content for the website and promoting the site to publishers, writers, academics, and reporters. My mother, of course, manages the estate and gives it a great deal of creative and marketing direction.

The purpose of the site is to provide authoritative information on the Dos Passos oeuvre for fans and scholars and general readers. We provide a full bibliography, book summaries, painting descriptions, and purchasing information. We also offer study resources for scholars.

Certainly, we are excited to promote classics like U.S.A. and Manhattan Transfer. In addition, we want to use the site to spread word of John Dos Passos’s obscure but strong works like Brazil on the Move. Many out-of-print works are deserving of fanfare. Our hope is to return some titles to print. We believe that the official John Dos Passos website can act as a catalyst for a revival of interest in his work.
It’s an exciting time for the John Dos Passos legacy.

DT: My sense, in teaching U.S.A. in recent years, is that the work of John Dos Passos has even more resonance now than a decade or two decades ago, in part because of the economic downturn of 2008. That is, John Dos Passos was so interested in the consequences of economic disparity, and the experience of financial downturns, that his work seems even more timely now than before. What are some of the things you think new readers could get out of his work?

JC: I think American readers today will see themes of immediate relevance in U.S.A., primarily due to the trilogy’s acute sensitivity to hard times. There is parallelism between the frenzied escalation of the 1990s and the 1920s, and the downturn of the 1930s and the 2000s.
The American economy of the 1920s was a relatively free market—a stranger to regulation really. The national politicians active in the 1990s and 2000s largely undid the regulatory framework built in the 1930s, and when the mortgage irrationality peaked, the whole system crashed.
U.S.A. has such verisimilitude and yet it reads more elegantly than any economics textbook.

DT: John Dos Passos died in 1970. How is he remembered within your family circle? What was he like as a person? As a relative?

JC: Since I was born after John Dos Passos’s death, I can only piece together his personality through oral history and primary sources. I love talking to my mother, my half-uncle, and surviving friends of my grandfather’s.

Also, I can read his memoirs, The Best Times, which is a truly beautiful book. It is currently out-of-print, and one of the goals of the website is to provide the kind of promotion necessary to interest contemporary publishers in his back titles.

I love my grandfather’s intellectuality. I’m moved by his ideas and his writing in an emotional fashion, not just a rational way.

Other keepsakes I have, gleaned from my mother’s memory and then stored in mine, are his habits—especially of the culinary persuasion. John Dos Passos was a garlic aficionado. He said it contained ‘every vitamin known to man.’ My mother and sister and I all concur.

When a dish was near complete but needed one final sprinkle of spice, John Dos Passos would often add lemon juice. He was a “foodie” long before the term came into popular usage.

DT: Are there writers working today in whom you imagine your grandfather might have taken particular interest? What do you think he’d make of the current state of American fiction?

JC: I think my grandfather would take an interest in several authors. Edward Rutherfurd’s epic historical novels would interest him, I think. They have a European bent, an undercurrent of nationalism, and a variety of social strata under the microscope.

I think if my grandfather were alive today, he would be reading widely about Brazil. He always had great hopes for the country. His admiration for the country is vividly expressed in his 1963 work, Brazil on the Move.

I think the disappearance of the public intellectual from American fiction would trouble John Dos Passos. He came of age in an era full of writers willing to plunge into political controversy and affairs of state. Many of those writers became experts on public policy matters.

Today, I think Hollywood takes a larger role in political debate than the U.S. literary establishment.

DT: One last question: what is the website address?

DT: Thanks, John! I will check out the website.
Posted by DANIELBLOOM at 1:30 AM