Story of our lives: "Splinterlands"

March 14, 2017       by JAKE VAIL
To date, science fiction (and its youngest child, the subgenre of cli-fi) seem best at addressing science fact. Not too surprisingly, most of it is rather apocalyptic.

It’s fairly common in “cli-fi” to read of massive storms and droughts raging over the earth while we puny humans cope as we can – roving bands of mercenaries fighting over resources and water, bioengineered animals helping us as fuel runs out and wide-spread plagues decimate populations, and global politics splintering into uncharted territories.

Many cli-fi stories seem to focus on a small group trying to make it in an unpredictable natural world.

More than an upset natural order, an upset social and political order is the focus of an intense new book by John Feffer. "Splinterlands" showcases a world of crumbled geopolitics, seen through the eyes – and the virtual reality goggles – of a dying writer reaching out to his estranged family. 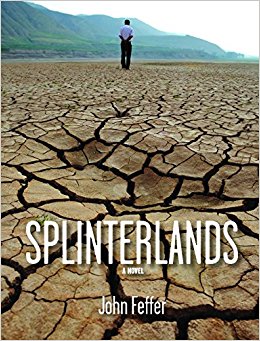 Feffer is director of Foreign Policy in Focus at the Institute for Policy Studies, so he knows a bit about geopolitics. One of the startling things about "Splinterlands" is that it was written before the current Trump administration came to power, and while we can’t know what might happen next, an awful lot of "Splinterlands" seems plausible. It’s as though Feffer has the gift of prescience Ted Chiang’s Louise has in "Story of Your Life."

2018 sees what the narrator of "Splinterlands" calls The Great Unraveling, as an increasingly globalized world breaks national boundaries apart and ushers in “market authoritarianism.” As Feffer describes it, “Commerce… merely rebranded nationalism as another marketable commodity,” and the “bloodlands of the twentieth century would give way to the splinterlands of the twenty-first.”
Soon after that, climate change rears its improbable head and an extreme weather event known as Hurricane Donald floods Washington, D.C., to such a devastating extent that the nation’s capital moves to Kansas City. From nearby Omaha, our dying narrator dons his VR goggles and surveys the world as he visits his family.

Feffer’s book seems to me to be the sort of cli-fi novel that Amitav Ghosh might be looking for. It’s not as outlandish as, say, Paolo Bacigalupi’s "The Windup Girl" or "The Water Knife" (both of which I also really like), but "Splinterlands" could conceivably be the story of our lives.

-Jake Vail is an Information Services Assistant at Lawrence Public Library
Posted by DANIELBLOOM at 4:21 AM