THE OVERSTORY by Richard Powers -- NO PAYWALL FOR NOW -- Reviewed by novelist Barbara Kingsolver in the NEW YORK TIMES, with Kevin Berger at LitHub too

THE OVERSTORY by Richard Powers

Reviewed by Barbara Kingsolver in the NEW YORK TIMES 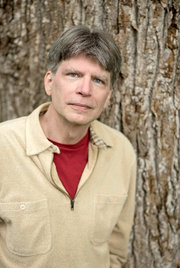 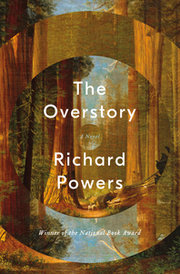 Trees do most of the things you do, just more slowly. They compete for their livelihoods and take care of their families, sometimes making huge sacrifices for their children. They breathe, eat and have sex. They give gifts, communicate, learn, remember and record the important events of their lives. With relatives and non-kin alike they cooperate, forming neighborhood watch committees — to name one example — with rapid response networks to alert others to a threatening intruder. They manage their resources in bank accounts, using past market trends to predict future needs. They mine and farm the land, and sometimes move their families across great distances for better opportunities. Some of this might take centuries, but for a creature with a life span of hundreds or thousands of years, time must surely have a different feel about it.

And for all that, trees are things to us, good for tables, floors and ceiling beams: As much as we might admire them, we’re still happy to walk on their hearts. It may register as a shock, then, that trees have lives so much like our own. All the behaviors described above have been studied and documented by scientists who carefully avoid the word “behavior” and other anthropomorphic language, lest they be accused of having emotional attachments to their subjects.

The novelist suffers no such injunction, but most of them don’t know beans about botany. Richard Powers is the exception, and his monumental novel “The Overstory” accomplishes what few living writers from either camp, art or science, could attempt. Using the tools of story, he pulls readers heart-first into a perspective so much longer-lived and more subtly developed than the human purview that we gain glimpses of a vast, primordial sensibility, while watching our own kind get whittled down to size.

But: Birds gotta fly, fish gotta swim. People will only read stories about people, as this author knows perfectly well. “The Overstory” is a delightfully choreographed, ultimately breathtaking hoodwink. The handful of readers who come to the book without benefit of reviews or jacket copy will believe it’s a collection of unrelated short stories. The opener is a gorgeous family saga with the texture of a Ken Burns documentary, and more plot. The Hoels are Norwegian immigrants whose vocations link them with our continent’s once-predominant tree, the American chestnut, as they all flourish and then are tragically cut back — both Hoels and chestnuts — to a lone scion. Pause for a moment to absorb this, then move on to the next immigrant story, in which Mimi Ma’s father invests too many hopes in a mulberry tree. Then, in the Vietnam War, Douglas Pavlicek is shot from a military plane and survives through a fortuitous intersection of his fate with that of a centuries-old fig tree. In another time, in Silicon Valley, an 11-year-old coding prodigy named Neelay Mehta has a much unluckier tangle with an ancient Spanish oak.

Trees are everywhere but incidental, it seems, until the seventh tale in the series, about an odd little girl who loves trees more than she loves most people and grows up to be a scientist. As Dr. Pat Westerford she spends years alone in forests doing her research, initially mocked by her peers but eventually celebrated for an astounding (and actually real) discovery: A forest’s trees are all communicating, all the time, via a nuanced chemical language transmitted from root to root. As this revelation dawns, the reader is jolted with electric glimpses of connections among characters in the previous stories. And then we remember we’re in the hands of Richard Powers, winner of a genius grant, a storyteller of such grand scope that Margaret Atwood was moved to ask: “If Powers were an American writer of the 19th century, which writer would he be? He’d probably be the Herman Melville of ‘Moby-Dick.’”Photo

His picture really is that big. These characters who have held us rapt for 150 pages turn out to be the shrubby understory, for which we couldn’t yet see the forest. Standing overhead with outstretched limbs are the real protagonists. Trees will bring these small lives together into large acts of war, love, loyalty and betrayal, in a violent struggle against a mortgaged timber company that is liquidating its assets, including one of the last virgin stands of California redwoods. The descriptions of this deeply animate place, including a thunderstorm as experienced from 300 feet up, stand with any prose I’ve ever read. I hesitate to tell more, and spoil the immense effort Powers invests in getting us into that primal forest to bear witness. It’s a delicate act, writing about tree defenders: In an era when art seems ready to embrace subjects as painful as racism and sexual harassment, it still shrinks from environmental brutality. We may agree that deforested continents and melting permafrost betray the gravest assaults we’ve ever committed against anything or anyone, but still tend to behave as if it’s impolite to bring this up.

In the kind of meta-conversation that makes a Powers novel feel so famously intelligent, the narrative is seasoned with canny observations on this exact problem. The tree scientist frets about public indifference to her work: “Forests panic people. Too much going on there. Humans need a sky.” Elsewhere, a patent attorney becomes profoundly disabled and seeks solace in novels, even while he muses on the limitations of the form. “To be human is to confuse a satisfying story with a meaningful one. … The world is failing precisely because no novel can make the contest for the worldseem as compelling as the struggles between a few lost people. … Though I am fake, they say, and nothing I do makes the least difference, still, I cross all distances to sit next to you in your mechanical bed, keep you company and change your mind.”Photo

Given that Richard Powers has swept the literary-prize Olympics, he should be a household name, but isn’t quite. Critics have sometimes blamed a certain bleakness of outlook, or a deficit of warmth in his characters: As Atwood put it, the story going around is that he’s “not cozy enough at the core.” I suspect the complaint isn’t entirely Powers’s problem, but rather a symptom of the art/science divide and some potent cultural stereotypes. At the prospect of a science-y genius taking the podium, a lot of the audience expects to be frozen out, or bored.

“The Overstory” makes a strong case for expecting otherwise. The science in this novel ranges from fun fact to mind-blowing, brought to us by characters — some scientists, mostly not — who are sweet or funny or maddening in all the relatable ways. The major players number more than a dozen, all invested with touching humanity, and they arrive with such convincing, fully formed résumés, it’s hard to resist Googling a couple of them to see if they’re real people. (They aren’t.) This is a gigantic fable of genuine truths held together by a connective tissue of tender exchange between fictional friends, lovers, parents and children. A computer programmer brings his work home to spend hours inventing games with his son: “Now, Neelay-ji. What might this little creature do?” A cute Eastern European backpacker invites herself for a one-nighter in the vet Douglas’s remote cabin, and he warns that she shouldn’t be out there by herself, looking the way she does. “‘How I look?’ She blows a raspberry and whisks her palm. ‘Like an ill monkey who needs washing.’” Best of all are two aging misanthropes, Patricia and Dennis, who will wreck any unsentimental heart with their gentle discovery that just an hour a day together can make a marriage, providing the nutrient that’s been missing all along. Even when viewed from very high up, through the lens of a thing that’s been alive since before Jesus, all these little people with their short, busy lives and blinding passions are very dear indeed.

A tree’s-eye view on a planet can also be plenty unnerving, in life and in art. Powers doesn’t hesitate to give us wide-screen views of the machinery of his plot, so we can’t miss the roles his characters have been assigned as fulcrum and levers bent to a larger purpose. It’s a fair enough device in a novel meant to tell us that humans aren’t the only show on earth: that in fact we’re not much more than a sneeze to a bristlecone pine. In the end, “The Overstory” defies its own prediction about fiction’s limits, making the contest for the world feel every bit as important as the struggles between people. Even if you’ve never given a thought to the pulp and timber industries, by this book’s last page you will probably wish you weren’t reading it on the macerated, acid-bleached flesh of its protagonists. That’s what a story can do.

RICHARD POWERS: THERE ARE THINGS MORE INTERESTING THAN PEOPLE

THE AUTHOR OF THE OVERSTORY ON WRITING ABOUT THE NONHUMAN WORLD

Posted by DANIELBLOOM at 9:51 PM