The rising tide of “cli-fi,” or climate fiction, a blog post by Melissa Hart 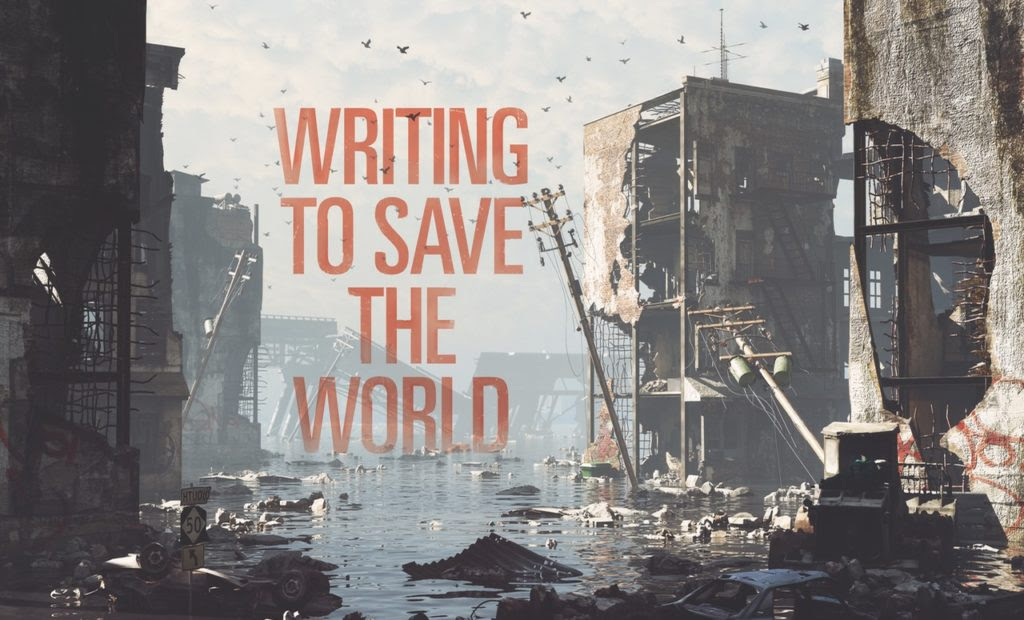 In Ashley Shelby’s Twin Cities home, climate change dominates household conversation. Her father is a retired investigative journalist and television anchor who devotes his days to climate activism. Her 10-year-old son is well-versed in concerns about fossil fuels and warming ocean temperatures. Shelby herself is the author of Red River Rising: The Anatomy of a Flood and the Survival of an American City, a book about one of the most dramatic floods in U.S. history, and a debut novel, South Pole Station. Booksellers categorize her novel, which follows a group of contemporary misfits living at the South Pole, as both humor and climate fiction.
“You have to be eccentric to want to spend 12 months at South Pole Station,” Shelby explains. “Humor is what I use to face the difficult challenges we have.”
Climate fiction, or cli-fi, as it’s called for short by climate activist Dan Bloom who coined the term several years ago, refers to those novels and short stories that include some discussion of climate change and global warming. Among them, you’ll find speculative works like Kim Stanley Robinson’s Science in the Capital near-future trilogy; Jeanette Winterson’s The Stone Gods, set on a fictional planet; and Margaret Atwood’s dystopian MaddAddam trilogy. You’ll also find a handful of cli-fi authors, like Shelby, penning novels set in the current world and informed by concerns that reflect those of readers right now.

While Shelby admires writers who take a dystopian approach to climate change, she worries that more apocalyptic stories create a distance and a scenario that reads more like science fiction. “It feels outlandish, like it’s not something that’s really going to happen,” she explains.
She prefers cli-fi that looks at what could happen in the next five years. “Look at all that’s happening now,” she says. “The hurricanes in Florida, what happened in Puerto Rico, the western states on fire. Soon, cli-fi will be classified simply as contemporary fiction.”
Her novel, South Pole Station, tells the story of protagonist Cooper Gosling, who travels to Antarctica as part of the National Science Foundation’s Artist & Writers Program and meets a scientist who believes climate change is a hoax. Shelby’s publisher describes the novel as “a comedy of errors” – unexpected in a book that hotly debates the veracity of climate change claims. Shelby explains that some of her story is based on the experiences of her sister, who lived at the South Pole in her early 20s. “They use humor as a survival strategy,” she says.
She notes that people are often so caught up in bad news about natural disasters that they become overwhelmed by despair, convinced that there’s nothing that they as individuals can do to mitigate the problems. “Fiction writers working in contemporary settings can humanize the issue,” she says. “If we can present a world that’s changing and familiar, we can get people to think about climate change in a way that’s not necessarily scary.”

All the things you want in a good novel

Alaskan author Nancy Lord also sees the value in approaching climate fiction with a sense of humor. In 2011, Counterpoint Press published her literary nonfiction book, Early Warming: Crisis and Response in the Climate-Changed North. In the process of writing the book, she realized that people suffer from what she terms “bad news fatigue” related to climate issues and the environment. “It’s really hard to engage readers in a nonfiction way because it’s all so terrible,” she explains. “Fiction can encapsulate the issues in a narrative story that’s fun to read. I tried to give my novel a fair amount of humor.”
Her book pH: A Novel is about a marine biologist and his students who study the effects of oceanic acidification on a keystone species off the Gulf of Alaska. During the Association of Writers & Writing Programs Conference (AWP) in 2016, Lord visited her senator, Lisa Murkowski, in Washington, D.C., and presented her with an advance copy. “She was very excited and promised to read it,” Lord says. “She recognizes all that’s happening in Alaska.”
Lord notes that her home state has been warming twice as fast as more temperate parts of the world. While Alaskans are enjoying a longer growing season, erosion threatens their coastal communities, and roads buckle because of thawing permafrost. “In pH, I wrote about warming oceans and also about acidification,” Lord explains. “It’s what we call ‘the other CO2 problem,’ which has giant effects on the ocean’s ecosystem.”
Getting the science right is critical in climate fiction, she says. Getting it wrong or oversimplifying it within the story does readers a disservice. “We want people to take away an awareness of the real reasons that these things are happening,” Lord explains.
She cites Ian McEwan’s novel Solar as particularly influential in showing her how to blend witty characterization with scientific information on climate change. She also studied Barbara Kingsolver’s Flight Behavior, about a family living in the Appalachian Mountains where Monarch butterflies appear, having eschewed their normal Mexican destination because of global warming. “The people there see it as a religious miracle,” Lord explains. “A scientist comes to town and examines the phenomenon from a scientific point of view. There’s romance and all the other things you want in a good novel.”

Ellen Meeropol began writing cli-fi until after first grandchild was born. A political activist for almost her entire life, she began thinking about the kind of world adults were going to leave to children. She began working with a local group in Massachusetts to study issues surrounding fossil fuels and ice melt and rising seas. Much of that information found its way into her novel, Kinship of Clover, which explores some of the ways in which people have decided to fight back against climate change with a range of political strategies.
“I didn’t start out to write about climate issues,” Meeropol explains. “My books begin with a situation or a character. In a previous book, I’d written about a character named Jeremy who loved to draw plants. When I was thinking about what I wanted to work on next, he started to whisper in my ear, ‘Don’t you want to know how I turned out?’”
In Kinship, Jeremy is a college botany major obsessed with disappearing plant species. His twin brother is a climate change denier. “In our incredibly polarized political climate right now, it’s really important in writing work that could be considered partisan to be generous to characters who do not share our authorial point of view,” she says. “Instead of adding to the polarization in our fiction, we can look for ways that people can talk to each other about these things about which we disagree so strongly. Jeremy’s brother comes to his aid when most needed. He’s politically opposite, but he’s not a bad guy.”
Meeropol says that cli-fi authors must resist the urge to lecture. Instead, she says, let the characters and the story carry the theme. She notes that fiction is better at asking questions than answering them. “What we can do best is to goad people into thinking about things they haven’t thought about before, experiencing the world in a way that’s new to them and seeing the world through the eyes of characters who are really different from them and their own experiences,” she explains.
Ann Pancake’s 2007 novel Strange as this Weather Has Been showed Meeropol what contemporary cli-fi could look like. The book follows a family who works in coal mining and struggles with the challenges presented by mountaintop removal mining and the resulting environmental destruction. “It’s beautifully written,” Meeropol said, “and just as relevant today as it was 10 years ago.”
She believes facts are not enough to change minds regarding climate change; people need stories. “We can access the facts about the risk of fossil fuels and the tipping point of CO2,” she says, “but unless someone brings those facts to life, neither our politics nor our behavior will change. Stories are a way to make those facts come alive, to make us care enough to do something about it.”

Climate fiction also speaks to those who will be most affected by global warming – young readers. Arizona author Austin Aslan is the author of The Islands at the End of the World and The Girl at the Center of the World, novels about a teen protagonist and her ecologist father set against the backdrop of climate chaos in Hawai’i. Aslan earned a master’s degree in tropical conservation biology while living on the Big Island.
He believes that many scientists are uncomfortable taking a stand on any issue, including global warming: “Most scientists – too many, in my view, and I am one – abdicate their responsibility to call for action when their findings demand attention.” Aslan explains that scientists often leave climate advocacy work to nonprofits and activists without strong enough followings to gain critical momentum on issues.
This is where novelists play a crucial part. “Storytelling is how people listen and learn new things,” he says. “Data and facts and figures go in one ear and right out the other. Storytelling adds to our personal experiences. Without knowing it, we absorb and assimilate what other people and characters are going through.”
He cautions climate fiction authors against being didactic. “The quickest way to kill a good plot and deaden great characters is to start using them as bullhorns for specific agendas,” he notes.
Schools around the country use Aslan’s The Islands at the End of the World as a teaching tool. Since the book’s publication, he’s seen a number of homework projects and reports that show how students use the novel to conceptualize the effects of climate change. He hopes his books help young people to recognize the importance of pre-emptive planning to mitigate future climate-related floods, hurricanes, wildfires, and earthquakes.
“In my books, set on Hawai’i, that would have looked like more sustainable farming practices,” he says. “In Houston, this past year, that should have looked like better development policies to avoid destroying invaluable wetlands and the region’s ability to soak up rainwater. I hope that readers of my books, when they’re asked to design, fund, or vote on local/state/national initiatives to prepare more smartly and thoroughly for disaster, will remember how unprepared the Hawaiian Islands were for the disaster awaiting them in my fictitious scenario.”
Contemporary cli-fi, whether written for adults or young readers, offers new ways to think about our changing planet. In immersing ourselves in stories with engaging characters and plotlines, we absorb new ideas and gain insight into the role that we might play in helping to mitigate disaster.
“Novelists have a disproportionate share of the burden in calling attention to issues, whether they be environmental or social or cultural or whatever,” Aslin points out. “The key is for our ideas to infiltrate critical minds in the smoothest possible way. I think that’s best done not by proclaiming the facts and the truth as we know them, but by getting out of the way of our own training and allowing our stories to speak for themselves, out of the vast array of experiences that our readers already carry with them when they turn to a story.”
Up in the Twin Cities, Shelby believes young readers and writers are already heeding the images and issues in cli-fi. After South Pole Station was published, her 10-year-old son had to write a short story for school. “He walked into my office and handed me a piece of climate fiction he’d written,” Shelby explains. “He introduced his classmates to the term ‘cli-fi’ and it became part of their curriculum.”

Contributing editor Melissa Hart is the author of the middle-grade novel Avenging the Owl (Sky Pony, 2016) and two memoirs for adults. Web: melissahart.com.
***"Curious, empathetic, compassionate: What we should be as human beings."***