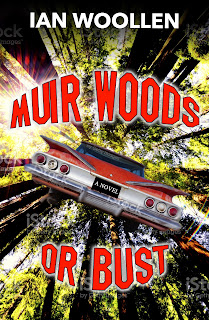 Our blurb for the novel:
This is a tragicomic cli-fi novel about a pivotal episode in life of the famous American environmentalist John Muir. In the 1860s, Muir had abandoned his interest in 'nature' and started a career in 'industry.' But a fateful on-the-job accident led to his return to his original calling. This book puts John Muir in a very new light!

It's a relatively short book  (weighing in at around 52,000 words) and Coffeetown Press in Seattle will publish the novel in July 2017.
A central focus of this novel is the critical self-blinding episode in John Muir's life, at his factory job in Indianapolis in 1867.
At that time in his life, Muir, abandoning his interest in nature, had embarked on a career in industry. His recovery from the accidental blinding restored his vision of his true self and his environmentalist calling. His pivotal, fork-in-the-road experience mirrors industrialist America's self-blinding, too.

Another sub-plot (in the present time) involves a psychotherapist abducted by a client. And the overlap between psychological and environmental health. The psychotherapist has developed a new diagnosis: ''Eco-Mood Disorders.''
Below is a tentative mock-up for the cover, which hints at the tragi-comic flavor.

Posted by DANIELBLOOM at 7:53 PM