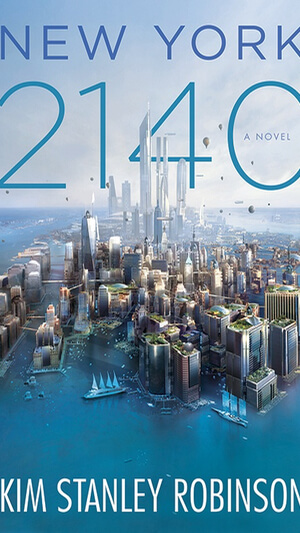 A good climate-themed story will have the potential to attract not only climate activists, but also some of the currently naysaying global warming denialists: The whole point is to reach people with emotions, not just preach to the choir.

Next up is the forthcoming cli-fi novel from the Hugo Award-winning novelist Kim Stanley Robinson. Due out March, New York 2140 submerges NYC under the water of the rising ocean sea levels worldwide.
“Every street became a canal,” explains the promotional blurb. “Every skyscraper an island.” How will the city’s residents — the lower and upper classes, quite literally — cope?''
The book is going to be a literary phenomenon for 2017 and blow the lid off climate-themed genres of all stripes. Sci-fi, cli-fi, you name it.

In New York 2140, a near-future projection of a world reshaped by climate change. Sea levels have risen by 50 feet, flooding Manhattan and countless coastal cities around the planet. Thousands of species have gone extinct.

Here are some teaser quotes and plot reveals:

While most scientists agree that several meters of sea-level rise are probably ''inevitable'' in the next 100-200 years, Robinson’s scenario is definitely at the extreme end of predictions for the mid-22nd century. Note the title's date: 2140 A.D.

“I squeezed the timeline a little because I also wanted to talk about things happening right now, in global finance and our political economy more generally, so the closer to the present I set the novel, the more it suited my purposes,” he told Peter Recjek, a fellow Antarctica visitor who has gone to the Ice ten times in recent years. Robinson has been there twice.
“Near-future science fiction is always making these enjambments of present and future; it’s not unusual in them to smoosh different temporalities together and present them as one moment. Reality seems to do this, too — we live in a present mixed with various futures overshadowing us. In essence, we live in a science fiction novel we all write together, as I’ve been saying for some time. This book is another example of that, and writing it felt like writing realism. There’ll be many a supposedly realist novel published in 2017 that isn’t as realistic as this one.”

Robinson’s new book shows that he is very familiar with the scientific literature on climate change, especially as it relates to the pending collapse of parts of the world’s major ice sheets.


PLOT REVEAL #1: In one of the more insane moments of his new novel, a half dozen polar bears suddenly escape into the cabin of character Amelia Black’s airship the Assisted Migration. She had been transporting the animals — on the brink of extinction — from the Arctic to Antarctic, a colder climate where they might be able to recover their population on a diet of seals and penguins.
After some harrowing aeronautical maneuvers by the autopilot, Frans, the powerful predators are recaptured and eventually set free in Antarctica — only to be killed (nuked!) by eco-terrorists bent on keeping the frozen continent pristine.

A 22nd-century version of a reality TV star, Amelia bristles at the idea of purity in a world that has been reshaped by millennia of human engineering.

“[T]here’s no such thing as pristine wilderness anymore, because the atmosphere is a part of it, and we’ve changed that chemically. Same with the oceans," KSR told Peter.
“So I think the overriding consideration now is for us to work to avoid extinctions as much as possible, and save as many species as we can by way of active ecological interventions of all kinds. In that effort some wilderness is good, yes, but also interventions that are part of making working landscapes of various kinds, including some unconventional mixes and movements, essentially whatever it takes to keep species alive.”
PLOT REVEAL# 2: The human species, despite the devastation wrought by an unpredictable climate, is far from becoming extinct in fictitious 2140. Technology has proven to be a valuable tool for survival, but exists largely in the background of the novel.

Photovoltaic paint covers New York’s skyscrapers. Construction materials are made by pulling carbon out of the air and turning it into graphene, which is then transformed into super-strong composites by 3D printing. Electric cars, bicycles and trains come to dominate land transportation, with many roads ripped out to create habitat corridors to help species survive.
Science fictional ''skyvillages'' serve as the new farms, floating above the Earth, returning only long enough to plant and harvest crops. Livestock becomes free range, though most meat is grown in vats.

He told Peter, “Technology is advancing rapidly on these fronts, if you use the usual sense of the word and mean machinery and chemistry and materials science. I didn’t make any of that up in this book—maybe the diamond spray [for waterproofing]. But in the important areas, carbon neutral and even carbon negative technologies are ready to accomplish what we want to get done—generate energy, grow food, and move around—and they’re being made stronger every year.''

“But still they can’t save us, because they are prototypes. There’s been good progress with solar and wind power, and in other areas, but they all have yet to be implemented at speed, they are still constrained by what gets called market forces. They have to be paid for—the materials and the human labor time it will take to implement them.

''But if we continue to believe what our current economic system tells us, we can’t afford to do that. We can’t afford to save the biosphere and create a sustainable civilization—it’s too expensive!

''Economics proves it, and is the law of the world.

''So what does that mean? It means that our economics is inadequate to the situation we find ourselves in. It’s a fraud on the future generations, a Ponzi scheme, a mistake we’re trapped in—however you want to characterize it, it isn’t up to the task of rapidly implementing our already-invented clean techs.”
PLOT REVEAL #4: Unfettered capitalism and the practices that led to the 2008 economic meltdown are squarely in Robinson’s crosshairs in New York 2140, where the future is no less unscrupulous than the present. The subprime mortgage crisis has been replaced by something he calls the Intertidal Property Pricing Index, where investors hedge against properties that exist in the fragile zone between high and low tide — another riff on sell high and buy low.

In the end, Robinson’s unlikely cast of characters overcome market forces and cash in on a better society.

In light of recent rising uncertainty in the United States and abroad, Peter said he couldn’t help but ask KSR if he’s still optimistic.

“This is just one moment in a long battle between science and capitalism. That’s the story of our time, and the story won’t end in our lifetime, but we can pitch in and make a contribution toward the good, and I trust many people will. Is that optimism? I think it’s just a description of the project at hand.”
Posted by DANIELBLOOM at 7:23 PM

Correction. Peter Rejcek is correct spelling of his name. Email him at prejcek@yahoo.com

He lives in Denver, although he is in Turkey now, the land of his ancestors, Rejcek being a Turkish surname. He wrote up his interview for the Singularity Hub.