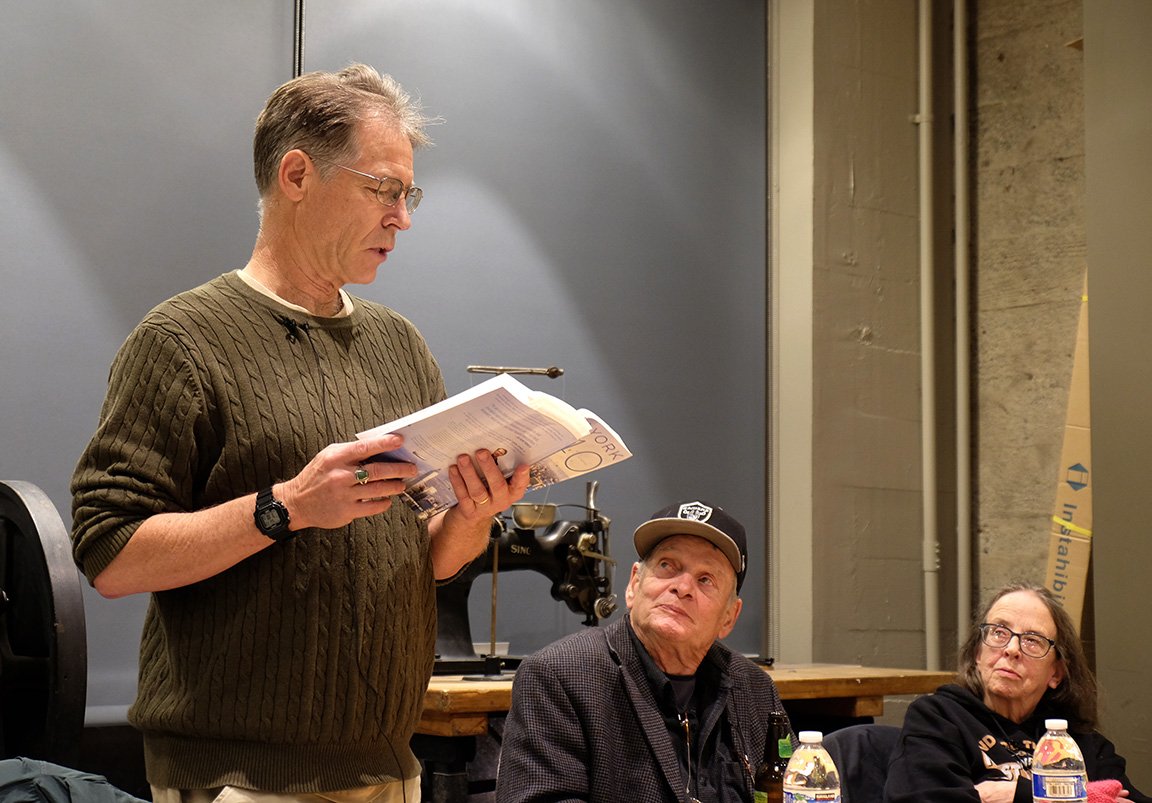 KSR reading from the book in January 2017 in San Francisco.

PW reviews KSR's new cli-fi novel here in an unsigned review by a staff reviewer or freelancer: "New York 2140"
INTRO: ''Unlike J.G. Ballard’s cli-fi novel ''The Drowned World'' in the 1960s, which was also set on a mid-22nd-century Earth devastated by global warming but focused on the effects of that cataclysm on the human psyche, Robinson’s latest not-so- far -away-near-future cli-fi novel examines the political and economic implications of dramatically higher ocean levels, specifically their effects on New York City. '' [slightly edited by this blog]

OOPS: ''The writing, ironically, is dry; several sections are exposition-heavy. ''

DENSE PROSE: ''They not only explain why Lower Manhattan in the year 2140 is submerged but contain dense analyses of how investments in real estate could be evaluated via a “kind of specialized Case-Shiller index for intertidal assets.” ''

MORE Cli-Fi THAN Sci-Fi THIS TIME: ''Such sections illustrate the comprehensive thought KSR has given to his imagined future, but they slow down the various interesting narrative threads, which concern a diverse cast of characters, including a reality-TV star who travels above the U.S. aboard an airship; the superintendent of the old MetLife building, which now contains a boathouse; and an NYPD inspector called in to investigate the disappearance of two coders. ''

THE GOOD NEWS: "Readers open to an optimistic projection of how humans could handle an increasingly plausible environmental catastrophe will find the info dumps worth wading through.''

''Dude is one of the best worldbuilders in sci fi ***but his prose is mad dry**** [like the PW review says]. I think if he combined forces with a better character writer they could create masterpieces. ''

I find KSR's prose a bit stodgy but he is nonetheless one of my favorite authors, I like the level of hardness of the sci in his fi. Also I am on a big climate-fiction binge right now and I'm working my way through his Green Earth

I wish I could get into his work, but with both Red Mars and 2132 I started out intrigued but lost all interest at some point. To this day they are the only novels I've given up on and left unfinished.

Kim is getting really tired of us not doing shit about climate change.


Both Aurora and 2312, two of his recent novels, reference half-submerged coastal cities as the norm. The relatively small bits of those novels that take place in future NY described this ramshackle metropolis as an adaptive and beautiful place. I look forward to a book that focuses on it. I've been on a KSR binge lately.


Should be interesting to read a good story about a flooded metropolis that hasn't descended into post-apoc misery.

UNSIGHED REVIEWS IN PW, the reasons why and PROs and CONs:

When I was regularly reviewing books, I would have loved to had access to PW because they were as comprehensive as possible in their reviews. But their subscription rate was so ridiculous that I would try to catch a copy at the library, which was a hit-and-miss proposition at best. But when you run a monopoly, you can afford to charge what you like.


I know Sara Nelson and while it would be presumptuous to describe her as a friend -- we've met only three times -- I'm sure she would be a friend if we lived in the same city. Funny, smart, passionate about books, shrewd about the industry. A total joy, in short.

So if PW is ailing -- and I'm not sure what I think on that score, but then I am utterly biased about PW, which has been very, very good to me -- Sara's a great person to have on board.


As a public librarian (and wannabe writer), I've been reading PW for over 20 years and until recent years when I started reading relevant blogs, most of the info I got on the publishing industry and upcoming books and trends was from PW. I don't mind the unsigned reviews, because I doubt I'd know the reviewers (LJ has signed reivews and I don't pay attention to who the reviewers are). The timeliness of PW's info has become a factor recently, but I still plan a lot of book buying (for me and for the library) around the announcements issues and was annoyed when the mass market pb announcements were removed from the print mag and were available only online (thus requiring registration and having a subscription--they finally told us how libraries could activate theirs). And the expense is also hurting PW. Many libraries have had to drop their subs due to an ever rising cost during times of budget cuts.


Re unsigned PW reviews, I believe, based only on slim circumstantial evidence (and notwithstanding Jenny D's comment above), that PW's reviewing pool draws heavily from the ranks of publishing itself, and to reveal these names would be akin to pasting a huge "conflict of interest" banner across the whole section. Not that the reviewers aren't approaching the books faithfully; it just wouldn't look so hot.


I've always had a problem with PW's anonymous reviews. To me, not signing the review seems disingenuous. You can make the statement behind a cloak of anonymity and not have to back it up.

Further more, a bad review might prompt me to look into a book if I know that reviewer's tastes. (Likewise a good review.) There's no barometer, and in at least one case, I know of a reviewer who was handed a noir novel. She hated noir. Told the author she hated noir. Told her editor she hated noir. So why give it to her? And since she spoke to the author, deleting the by-line (and thus a credit) was rather pointless.

One thing PW can do to improve is to ditch the anonymous reviews. It doesn't do anyone involved any good, esp. PW.


I find it absolutely maddening the way that PW is unavailable online to non-subscribers. Surely they could put it up with some suitable lag time to make sure they didn't lose subscriptions? Or keep parts off-line (maybe the exhaustive short-review sections, since this is presumably what people subscribe for) to protect their base?

In grad school I wrote a number of those anonymous PW reviews, and found it incredibly frustrating--more because of the shortness of the form and the badness of most of the novels I was sent than because of the anonymity, but I would tend to agree with the call to give reviews bylines. (Perhaps the main reason they haven't done it already is that it would reveal that they rely on a huge stable of underpaid and underqualified grad students and other similar types? Speaking autobiographically, of course... I am sure that (a) they pay more now than they did in the mid-90s and (b) lots of the people who write those reviews are supremely well-qualified...)

''I've never really understood the lack of bylines on the reviews. I suppose the idea is that the reviews are supposed to reflect a uniform opinion given by the magazine, but so as newspaper reviews are supposed to reflect the opinion of the newspaper (or at least try to, when freelancers are on the payroll) why shouldn't trade magazines be held to the same standard? Besides, it's a false idea anyway; careful attention paid to PW's reviews can, and likely do, reveal differences in voice, taste and opinion. It seems more prudent to let the people behind the reviews have credit for such.''

CLONE WARS: 2 book covers for 2 ''cli-fi'' novels with NYC under water on both covers. http://moyasbuchgewimmel.de/ein-etwas-anderer-klonkrieg/ re #newyork2140 #CliFi #humor