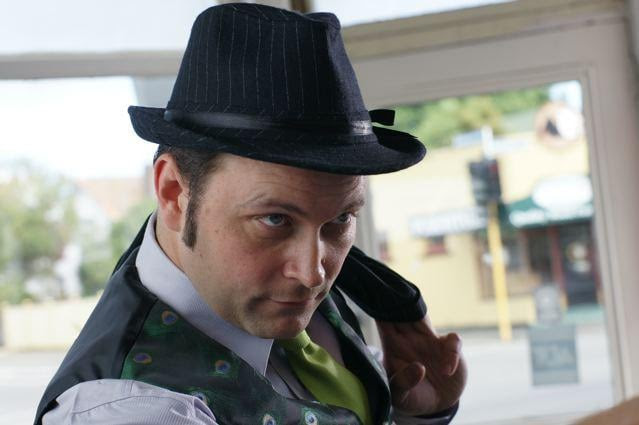 Angus Benfield, (''The Holy Roller'') has just landed his next feature film role. The movie titled ‘Motorvation’ follows Fatty Melvin (played by Benfield), a struggling motivational speaker who one day has an epiphany that changes his whole message from chasing after “wealth, health and stuff,” to “living for today.” Benfield will be travelling to Los Angeles in late 2017 for the shoot.


This blog caught up with him the other day and via our office in Taiwan and his home in Australia, we chatted a bit about his upcoming movie and how he got into the movie industry. And more.


"I’ve been working in Australia for years and have always had the U.S. in my sights. Now it’s finally happened…it’s incredibly exciting to get an opportunity like this, especially to be part of such an important film," he said.


The film is inspired by the Biblical character of Solomon, who had more wealth and success than anyone on earth and yet considered it meaningless compared to what is truly important, Angus told us.


"We get so caught up in chasing after a life that is always WHEN…when we are richer, when we get that job, when we lose those extra pounds… that we miss out on what is really important in life," he said.


Angus isn’t a newcomer to the big screen. He had his big break in Australia when he was cast as ‘Lex’ in Dean Murphy’s cult classic ‘Lex and Rory’, ‘Jack’ in the indie film ‘Wait up Harriet’ and most recently as ‘Pastor Luke’ in ''The Holy Roller'' which was released in cinemas in Australia and New Zealand as well as being ‘Official Selection’ at the New Zealand film festival and selling out every screening. ''The Holy Roller'' then went on to have a hugely successful release across the US which is still going strong to this day.


"When I give talks to young people, I constantly tell them not get caught up in thinking that the “TOP” is going to make them happy because it won’t, too many kids today are suffering from ‘status anxiety’ because they didn’t get enough online likes, because they don’t look a certain way, because their parents aren’t rich…they don’t realise that even if they got all of those things, they would still feel the same. This is why I see Hollywood as the perfect 'mission field'; it’s the most influential city on the planet. What is said in Hollywood echoes across the globe," he told us.


''Motorvation'' will be released worldwide in 2018 through Ignite Pictures.

To get a better picture, or take, on Angus, we asked him a few questions by email and he kindly took the time to reply in internet time.

"I am 45 -- born in Sydney, Australia and lived there for most of my life. My dad was in advertising (think ''Madmen'' if it was set in the 1980s!) and my mom was a stay at home mom (and artist/painter)," he said. "However they divorced when I was 14,and my mother suffered from multiple sclerosis and was bedridden for my teenage years, for which I was her personal carer."
Whilst in postproduction on '‘The Holy Roller'' in Christchurch, New Zealand, his mother died suddenly in Sydney.

"My family and I then lived through the disasters of the Christchurch earthquakes, and 11 months from my mother’s passing, my father also died suddenly in Bali, Indonesia," Angus said.
''There were many tough times in my earlier life, but I am thankful to God that both my mother and father supported my pursuit of being an actor, and for that I am always deeply grateful," he added.

When asked about his religious beliefs, Angus said: I'm a Protestant -- although I was not brought up in a religious family. This was something I found on my own."
His entry into show business began early.
''I actually started off at around 8 or 9 years old, wanting to be a special effects makeup artist like Tom Savini or Rick Baker," he told us. "I loved to turn myself into monsters and scare my parents and this gradually led to acting.''

''I got into acting when I was a teenager, thanks to a friend of my mum’s who suggested I get into it. I started with an agent before I got into acting classes when I was about 20, before that I went to lots of auditions and never got any of them! But when I went to acting school I suddenly got what it was all about, then fell in love with the 'craft'. It was no longer about getting the TV commercial for “potato chips” or being on a TV soap, it became about the 'craft'.... and then I got the work.''

Some observers, this blogger, too, have compared Angus' voice and face to the emergence of a new Russell Crowe. When I told this to Angus, he replied:

I'' take that as a huge compliment as I am a big fan of Russell. He has done some amazing work...so I'll take it! Like a lot of actors in the past, we look up to those actors who are paving the way. In the past it was Marlon Brando, James Dean and then the likes of Gene Hackman, Al Pacino and Robert De Niro, but Dustin Hoffman for me is one of the greatest ever. It’s certainly nice to see those from your own country doing well, actors who are great at their craft. Hugo Weaving’s performance in Hacksaw Ridge was unbelievably good! I went to the same school as Hugo Weaving and Hugh Jackman...they were a few years ahead of me though...but when it comes to being compared to a ‘NEW’ anyone...Russell is a nice comparison!''
So this new movie tiotled ''Motorvation.'' What's it about?

Angus explained it this way: '‘Motorvation'’ is the story of struggling motivational speaker ‘Fatty Melvin’ who works as a Janitor, but dreams of one day being like his successful big brother. However when his brother dies unexpectedly - Fatty is asked to take over and carry on the family motivational business. In the midst of this, Fatty has an epiphany, one that changes everything. He realises that perhaps he needs to stop chasing after the ‘dream’, and learn to ‘live this life now’. In doing so he starts a kind of crazy ‘movement’ with masses of followers. After losing his brother, he has become incredibly aware that it can all be over before we know it.

The shooting dates for the movie are still being worked out with scheduling etc., but the shoot will be about 2 months, and all on location around Los Angeles. His agent is Michelle Horner of Ignite Elite Artists (in Australia and L.A).

When asked to define what a ''mission field'' is, Angus put it this way:

''It’s just a term that describes a location (geographically) that can be the basis of influence from an outside source (i.e.: a ‘Missionary’ of religious persuasion)…A place like Hollywood is a melting pot of multiple outside influences, which sets the tone for most of the world. It’s on the cutting edge of politics, social issues, humanitarian rights etc. Films and TV are always used as a means to get a ‘message’ out, celebrities also become this mouthpiece… I am interested in the issues that are affecting society today, I want to be able to help people, I like to encourage and motivate both young and old, to see their full potential.''

When asked if he had any advice for young people around the world who dream of becoming actors, Angus said:

''Well as I mentioned above, I stumbled into acting early on, but it was when I went to acting school that I really began to understand it, and after 4 years of auditioning and not getting a single job, I landed my first role in the feature film ‘Lex and Rory’. I was cast as Rory the co – lead and then five days before filming the director swapped the roles and I was cast as the lead of ‘Lex’.
This was my break, but in this industry you need multiple breaks and each break helps you to get a little further into the industry. The problem comes when you focus on the ‘tip of the mountain’; you are only going to end up disappointed because it’s actually all about the journey and not the destination. This would be my first bit of advice. It’s one of the hardest things to be in the moment on the journey and I believe you have to force yourself to stop and recognise your achievements. You may have only landed an extra role, (and I was an extra for those 4 years so know what it’s like), it’s tough, you don’t get to sit at the actor’s table, you get the leftover food and you’re not treated great, but hey, you are on a movie set, there is no better place to be! Then when you get a speaking role, or a featured extra role, celebrate it! I say this because as soon as you get anything, you automatically look at what you didn’t get…you got the support role…but now you’re disappointed you didn’t get the lead and so forth…''

''The next bit of advice is that you need to have a ‘steel jaw’ and not a ‘glass jaw’, to use a boxing expression. It gets harder with each audition, to take that thing that all actors must face - “rejection”…and there is a lot of it. Every audition and call back is a job interview and a potential rejection, but you have to keep going back and keep trying. To keep positive in all of this is not easy to say the least…so you have to have ‘thick skin’ and a ‘steel jaw’, but at the same time still be able to act, show emotion and be vulnerable under pressure…it’s no easy feat.''

''The other bit of advice is to diversify, to not just limit yourself to being an actor waiting for the phone to ring. Learn other related skills that keep you in the game. I’m not talking about a back up career, as a back up career in this business is where you will end up, it really is all or nothing! Learn related skills like screen writing, directing, producing…become your own studio, your own company, where you become the product and the brand. Take advantage of social networking, get on YouTube, do whatever you can to get your voice out there…it will be a challenge but if you’re feeling the pressure of the wall of rejections, it only means one thing – you are moving forward! Failure is only failure when you never even tried.''

''You need to work hard, if acting is what you want to do, you have to stop making excuses, you need to learn the craft, join some classes, go to acting school, network and hustle with industry people. Jump on indie films, no budget films, get extra roles, get on set, get into work shops, always be doing something, have a positive attitude, stay passionate, read books and feed yourself with whatever you can get about others in the business…always be moving forward and never, ever say ‘one day’, because today is the day you do it!''
''The last bit of advice is to be who you are. Don’t try to be like anyone else. There is nothing wrong with admiring or following another person’s career as I mentioned before, that is fine as all artists do that, but at the end of the day you are unique and you need to celebrate and embrace that…and never ever, ever, ever, ever quit!''