NOTE: Maja Lunde will be in NYC on Sept. 14 to talk about the book. -- http://www.scandinaviahouse.org/events/the-history-of-bees/


Cli-fi – climate change fiction – has become so popular it has achieved the status of a genre. That makes it more easily identifiable and more marketable, but it also comes with pitfalls. Conventions carry the risk of appearing formulaic and repetitive. They also emphasise a genre’s status as fiction. This is all a problem for cli-fi, given that its practitioners are concerned with raising awareness about very real and urgent issues.


I had these thoughts reading Maja Lunde’s cli-fi novel The History of Bees. Once again, I was confronted with a future involving global warming, famine and hardship, and a Third World War. I was in familiar territory and feeling – dare I say it – a little bored. I began speculating on the possibility that cli-fi actually performs a kind of inoculation of its readers against the potential horrors of our future.


Having said that, Lunde presents an original angle. The dystopian future she depicts hinges on the disappearance of bees from their hives. This is a real-world phenomenon, known as colony collapse disorder, diagnosed as a problem in 2006. Bees, as pollinators, are crucial to food production.
The History of Bees interweaves three first-person narratives, which are set in three different time periods. One of those narratives, focused through the character of a US apiculturist in 2007, shows us colony collapse disorder in situ. Another narrative follows a 19th-century English scientist as he attempts to achieve fame and glory by inventing a convenient hive for beekeepers. In the third narrative, set in 2098, a Chinese woman is one of a vast workforce who hand-pollinates fruit trees in the aftermath of “The Collapse”.
The characterisation is at times heavy handed and the prose (in translation) occasionally flawed, but Lunde shows skill in drawing together the three narratives by the novel’s end, and in concluding with a welcome self-reflexivity about cli-fi’s aims and challenges. Most memorable, though, is the proposition that gradually emerges: “in order to live in nature, with nature, we must detach ourselves from the nature in ourselves”. Notably, it is the character from China – the country of the one-child policy, a universally denounced attempt at detaching people from their natural instincts – through whom this message is first presented. Here the book offers a bold provocation in the way cli-fi must if it is to have a genuine impact.  KN
Simon & Schuster, 400pp, $32.99
This article was first published in the print edition of The Saturday Paper on Aug 26, 2017 as "Maja Lunde, The History of Bees".


Behind the Norwegian Bestseller, 'The History of Bees'


The Norwegian novel The History of Bees, about three generations of beekeepers, was published last month in Germany. It is currently a bestseller there, having hit #3 on the Der Spiegel list. Outlined below are some of the steps that helped turn the book into a bestseller.
Book title: The History of Bees/ ( In German, Die Geschichte der Bienen) 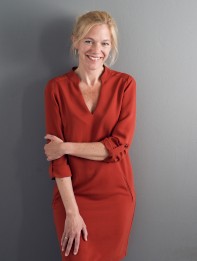 Author of 'The History of Bees,' Maja Lunde.
Article continues below.

First published in Germany: on March 20 by btb (Random House)
Format: Hardcover
Author: Maja Lunde is a Norwegian author who has written several books for children/young adults. The History of Bees is her first novel written for adults.
Acquiring Editor: Regina Kammerer, publisher at btb & Luchterhand
How It’s Done: The book is, as of this writing, #3 on the Der Spiegel bestseller list, and in its fifth printing in Germany. Translation rights to the book, which are controlled by Oslo Literary Agency, have sold in over 15 countries. (Touchstone will be publishing the book in the U.S., in August.)
Why They Think It’s Working: Kammerer acquired the book at the 2015 London Book Fair, off of a proposal and a handful of translated chapters.To promote the book, btb ran a major marketing campaign which included the shipping of an extensive number of ARCs (1,000 of which were sent to key retailers in Germany & Austria), along with non-book items for display, such as wooden honeycombs. The strategy was effective in drawing positive feedback from retailers, and greatly helped the book gain high visibility in bookstores.
Also on PW