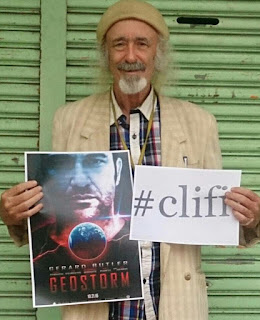 With all the input I am getting from over a dozen countries worldwide re the growing interesting in the cli-fi genre, a friend suggested on Twitter that I am now the ''Global Ambassador for Cli-Fi.'' Well, that's a tall order. I am just one among many people doing what they can to raise the alarm about runaway global warming and what might happen if we fail to stop it in the next 500 years. Maybe sooner.

On a daily basis now, 24/7, emails and Tweets and Facebook messages come in to my wireless office in Taiwan -- actually, I have no office, I just use a local email cafe, internet cafe, to do my work for a few hours every day -- and the messages and suggestions and ideas come in from writers and literary critics and novelists and poets and news reporters and editors in India, Japan, Italy, Germany, Australia, the UK, the USA and Canada, Chile, Argentina, Spain, Norway, Sweden, all over the English-speaking world and on many other languages as well. So cli-fi is on its way. It's doesn't need one ambassador. It already has many ambassadors.

But if I am the Global Ambassador for Cli-Fi, it's because I am part of a larger cli-fi community and just doing my work as it comes to me. If I can be a cheerleader for the writers and poets and novelists and literary critics around the world plowing this field of climate fiction, aka cli-fi. then I am happy to help.

The real major players are and will be the writers themselves  -- the novelists who have written, are writing and will write future cli-fi novels well into the 22nd and 23rd centuries. What we are doing now in the 21st century is just a warm up! More is coming down the road, and in ways we still cannot imagine.

I am glad to be part of the amazing community of ''woke'' people.

I was once a sleepwalker. Not anymore!