Share to Facebook23Share to TwitterShare to LinkedInShare to EmailShare to Print 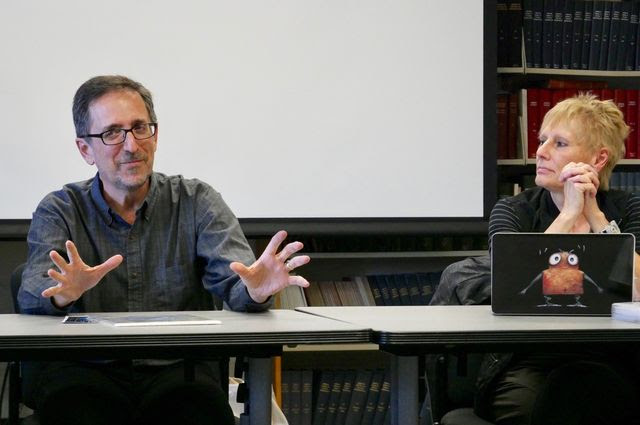 Photo by Belinda Waymouth/UCLA - Pictured Andy Revkin and Ursula Heise
New York Times ''DOT EARTH'' blogger Andy Revkin and UCLA professor Ursula Heise exchanged ideas about how to tell stories about the climate and sustainability.
After 30 years of science and environment writing, Andy still finds ways to challenge his thinking.
The award-winning author and founder of the New York Times’ Dot Earth blog recently flew across the country to visit UCLA for a conversation hosted by LENS — the Laboratory for Environmental Narrative Strategies. The wide-ranging discussion touched everything from Peruvian agriculture to science fiction, but a common thread emerged: exploring new, diverse and even uncomfortable ideas could be crucial for people to successfully adapt to our rapidly changing planet.

Revkin compared the concept to ecosystem resilience, recalling a scientific paper he once read on the subject. The paper concluded that resilience is, in large part, a product of the diversity of ways species respond and function within an ecosystem. Likewise, a broad range of ideas and approaches to environmental problems will be more likely to result in effective solutions.

“You can just put in ‘social system’ instead of ‘ecosystem,’” Revkin said. “No one really knows which technological or social innovation is going to work out. Having dynamic tension in a society is fundamentally adaptive.”

That philosophy comes with one big caveat, he said — it is contingent on a level playing field, and that’s not always the case. “When it comes to climate policy and energy needs, there is no ‘we,’” he said. Relatively well-off countries and environmentally progressive countries such as Singapore experience climate change much differently than the slums of Nairobi, Kenya.

Another evolution in Revkin’s thinking occurred in 2006 with the release of Al Gore’s landmark documentary “An Inconvenient Truth.” The film raised the profile of global warming and its dire consequences, but public opinion on the topic became inflamed and increasingly polarized. Revkin shifted his focus from geophysics and policy to behavioral sciences to better understand how people respond and interact with environmental data and communications. “I’d been writing books and magazine articles presuming that if I just told the story more effectively, then people would go ‘a-ha,’” Revkin said. “Many scientists have the same expectation.”

Why was Andy at UCLA? Jon Christensen and Ursula Heise of LENS had invited Revkin to explore storytelling [using such literary platforms as "cli-fi"] in the Anthropocene Epoch, a proposed geologic age in which human activity has been the dominant influence on climate and the environment. LENS explores strategies for developing new environmental narratives — which involves understanding how they’ve evolved so far.

After 30 years of reporting, a gloomy outlook might be excused — there has been no dearth of tough news on climate, conservation and the preservation of natural resources. Revkin said he has come to terms with much of it. “A lot of letting go has happened for me. Most of us feel bad about climate change because it has a lot of the same qualities as death. A lot of it is inevitable. There’s no quick fix.”

He no longer focuses on numerical goals like reducing atmospheric carbon dioxide to 350 parts per million or reaching 80 percent renewable energy by 2050, but that doesn’t mean he’s left hard science behind.

When writing and researching, he gravitates toward those who challenge their own ideas. “I always look for that in scientists,” he said. “The people I pay attention to are the people with open minds.”
Share to Facebook23Share to TwitterShare to LinkedInShare to EmailShare to Print
Tags:
Media Contact
Posted by DANIELBLOOM at 9:42 PM