How one man created the 'cli-fi movement' 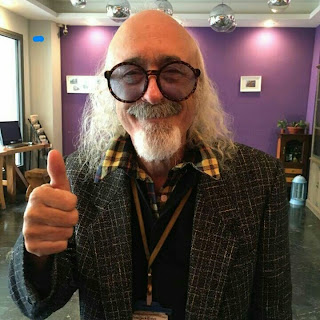 by staff writer with agency
SEE ALSO:
''What does it mean that [cli-fi] is becoming a descriptor and not just a literary term?'' Interestingly explained here. http://cli-fi-books.blogspot.com/2018/03/as-cli-fi-term-enters-dictionaries-and.html

Have you ever wondered how one man, working alone without an office or a secretary or even a computer in his house, created the ''cli-fi movement''? Read on.

Day by day, one press release and blog post (and dozens of tweets) at a time, under the umbrella of The Cli-Fi Report, and now available as a portal website with ten language translation buttons for foreign language readers, the movement marches on.

Slowly, month by month and year by year, Nad achieved what he had set out to do: start a climate change themed literary movement. And now in 2018, the "cli-movement'' has reached around the world, in many languages, not just English.

And thanks for positive press in the mainstream media, from the New York Times to the Guardian,  the cli-fi movement has moved mainstream literary critics and eco-literary academics to embrace it worldwide: in France, Germany, Spain, Mexico, China, Taiwan, Finland, Sweden, Belgium, the Netherlands and Italy.
Just google the term "cli-fi" and over 5,000 items will come up.

To do this Nad spent six years writing press releases and blog posts (and tweets) on a 24/7 basis without any weekend breaks or annual vacations. Crazy guy, a force of nature. No pay, no salary, no office, no secretary, just pure plugging away in a determined persistent manner until he found the ear of magazine editors and newspaper reporters who were personally curious in learning more about the power of cli-fi novels and movies and the rationale for creating the term as a response to humankind's failure to take climate change and human made global warming seriously in age of internet distraction and pet animal videos.

And here we are in 2018: ''The Cli-Fi Report'' marches on, with, sadly, no victories or success stories to claim. Sadly, the world still focuses on distractions and entertainment and not on the very serious issues we face in terms of future climate change impact events, and how novels and movies and stage plays can help raise awareness.

So there's nothing to celebrate here. Nothing much has changed. But the cli-fi movement at least signals a chance that maybe things can change over the next 100 years and into the next 20 generations of man. And woman.

Will you join the cli-fi movement, either as a reader or a writer or a literary critic or an academic? There's a long way to go, and we need all the marchers and readers we can assemble online and in person at rallies and academic conferences.

Nad Moolb is not an important person and he will soon fade away. But waht he started will last for a very long time. And who knows? It might even make an impact on our world, and it might even in its own small way, a difference, a marked difference.
Posted by DANIELBLOOM at 7:44 PM

Thanks Bruno Arpaia in Italy!