Austral by Paul McAuley
REVIEW by David Agranoffat 11:25 AM 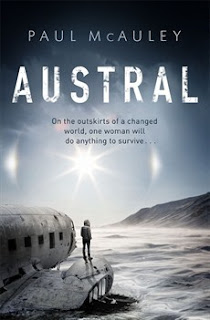 
A couple months back my father surprised me for asking for some recommendations for cli-fi novels. You see my father is extremely well read in non-fiction, but he is not a novel guy at all. He has read three novels as long as I have know him. He is a retired professor of political science and his school is known for environmental affairs so it was not so weird that he was interested in Cli-fi.

Cli-fi was a term I taught him when he said he wanted to read some novels that dealt with the future of climate change issues. He had picked up this novel ''Austral'' that he read about in the economist. I told him I thought he should check out Kim Stanley Robinson's Green Revolution trilogy, in many respects I think that was more what he was looking for.


He couldn't get into this book in large part for the same reason I liked it. This is a weird entry in the subgenre of climate change speculative fiction, that may have been a little too out there for my father. I on the other hand thought this novel balanced concept, character and world building really well.


The setting of this novel is the Antarctic peninsula at sometime probably 100 years or more in the future. Not much is said about the outside world, but we get lots to chew on in this setting. Austral has live her whole life in Antarctica, genetically edited to survive in this cold climate she is part of a group of experimental humans nicknamed Husky. Our main character Austral is a troubled person a former criminal who is trying to get her life back by working as a corrections officer at a labor camp.


Austral finds out she is pregnant, a result of an affair she was having with a dangerous criminal. When she decides that she has to get away from the Peninsula before she is exposed she gets pulled into a kidnapping plot. One of the richest men in the world and his daughter are coming for a visit, to check out their investment. Austral thinks kidnapping this man's daughter might be her key to escaping. The problem is she is more connected to this man, then she first thought, and he is involved in more nasty business than she is prepared for. When she kidnaps the teenager they have to avoid gangs and various dangers traveling across the Antarctic landscape.


This set-up and setting makes for a really cool adventure tale that McAuley strengthens with a cool structure that weaves in the world-building and character back story. One of the strengths of the novel is Austral. She is a really well written character, a female lead that is layered and complex. She is not a male fantasy while driving the story as a flawed hero. She is one of the strongest elements of the novel.


The novel has a lot to offer from gangsters, Ecopoets (environmental radicals), the harsh almost alien landscape, and weird crime. There is a lot going on and for the most part I really enjoyed it. In a strange way I enjoyed it more when I was thinking about after it was over. I respect the hell out any other who tackles this issue and tackles it well.