Where America (and the USA book industry gatekeepers) fail to grasp the future, France soars and embraces ''cli-fi

When I was a high school student in 1965, I would have been 16 then, I was lucky enough to be accepted into a Rotary Club student foreign exchange program for two months in the summer. My mother found the information in the newspaper and told me about it and asked if I wanted to spend the summer in France. This was a new idea for me, and a new chance to see the wider world overseas outside the sweet but narrow confines of my hometown on Springfield, Massachusetts.

So I said yes.

My ''mother-of-five-growing-children'' mother signed me up and my supportive father paid the fees and a few weeks later I found myself on an old rusting freighter ship -- this was NOT a 5-star cruise, far from it -- leaving port in New York loaded with about 500 young American high school students headed for summer homestays in various parts of Europe.

It was a 7-day crossing of the Atlantic Ocean, and just being out on the open sea, with endless horizons and amazing sunrises and sunsets -- and some huge waves that hit our ship broadside and gave some sense of how powerful the ocean was! -- was a trip in itself.

Once in the UK, we took another ship to Le Havre, and then a bus to Rouen, where I was scheduled to spend the summer with  a delightful French family, the Lebrun family, husband, wife, and three children, in an apartment along Rue Jeanne D'Arc.

I spoke only a few sentences of French at first, having studied French in high school for three years at that point. Reading French was one thing in high school classes led by Mrs Landry our French teacher, but actually speaking it to real French people in their home in France was quite another challenge.

But with the kindness and warmth of the Lebrun family I slowly got the hang of daily conversation with everyone at the dinner table and I was in a 16-year-old's summer vacation paradise!

We went to French language classes in weekday mornings, and on field trips by bus and train in the region in the afternoon. I ate everything my homestay family offered me, including a delicious dish of what they told me was cow brains, I picked up the French newspapers and read them at the local sidewalk cafe, I went to the local movie theater and watched French movies, I listened to Francois Hardy on the radio, and I even fell in love with a local girl, Gisele, my age, 16, and to this day (at age 70), I still remember her face, her voice, her eyes, her everything.

Gisele Bridoux, I still love you!

So that was my introduction to France and that was my wake up call to the fact that there was a great big world outside the borders of America, and I came back to my senior year in high school a changed person. Not only did I write lovesick letters half in English and half in French to Gisele who I knew I would never see again, but I also began see the world in a new and different way.

The French language was my passport to a future self. I never looked back.

Yes, I also learned Japanese in Tokyo in thh 1990s, when I was in my 40s, and then I learned Chinese in Taiwan in my 50s, but it was always French that warmed my heart and brought back memories of that summer of  '65. Time doesn't fly. Time evaporates.

So here I am typing this blog post about a recent news article that appeared in a prestigious French book industry trade publication, similar to Publishers Weekly in New York, also a book trade magazine read around the world and online these days. LivresHebdo.fr  the French publication that carried the news article about the rise of cli-fi novels  in France, and written by journalist Clotilde Ravel, is online too, and that's how I came to see the news.

What was it about? The headline said it all: "La Vague Cli-Fi" (The Cli-Fi Wave).

In her article, Mlle Ravel decoded the arrival of cli-fi novels and movies in France, and to to get her story, she interviewed several people in the French publishing industry, including Natacha Derevitsky, Mireille and and several French cli-fi writers as well, including Yann Quero, Lorris  Murail and Jean-Marc Ligny.

Clotilde also called me up on the telephone one Sunday afternoon in Taiwan and spoke with me in fluent English for 30 minutes to get my take on what cli-fi was and where it might be headed as a global literary genre.

So where is cli-fi headed in France?

I can say this: it has arrived. 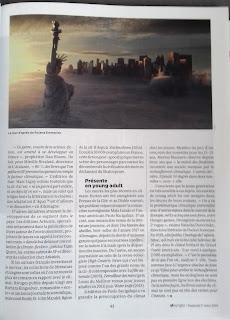 [Here is an informal English-language machine translation of the original article in French.]

In the meantime, I'm very happy to see the French publishing g industry looking into the rise of cli-fi in France.

Even the USA publishing industry, for all its forward looking image, has never reported this news before.

When I asked a top editor at a major newspaper in New York if she was interested in reporting on the rise of cli-fi novels in the USA and the UK, she at first igored by emails and tweets to her and finally she replied in a terse and unfriendly two-word email: "Not interested."

Shame on her for being so provincial and narrow-minded.

And what did the French book industry say? "Very interested!"

You see, France and its literary circles is way ahead of America when it comes to understanding the power of literature. French literature and its champions are not afraid of the future.

Apparently, America and its literary gatekeepers are afraid of looking into the publishing future of climate-related novels. Shame on that overworked person in NYC who rudely said she was "not interested."

So give me the French literary mindset, any day, over the provincial American mindset that only seems to care about moeny and the bottom line and counts dollars in its sleep and has forgotten how to dream big.

Long live Livres Hebdo in Paris for standing up for the rising cli-fi genre!

Cry a river for those American literary gatekeepers who are sadly "not interested" editors.

That's the difference between French culture and American culture, if America even has a culture anymore.

Posted by DANIELBLOOM at 4:13 AM