John Lane has the "Anthropocene Blues" 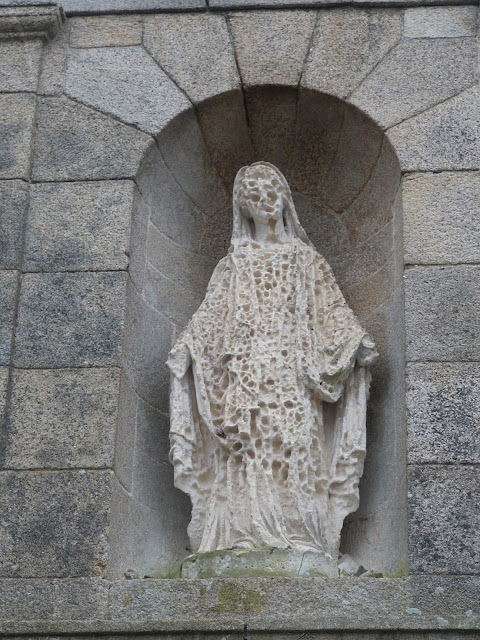 ''The Madonna of Global Warming''
A weather-beaten limestone statue of the Virgin Mary outside a church in northwestern France near the ocean. [Photo taken in 2006 by French short story writer and translator Yann Quero, who captioned the photo as well.]


South Carolina poet and college professor John Lane has the "Anthrocene Blues" and his new book of poems is a welcome addition to the genre. I recently met John after reading a very good interview with him the Los Angeles Review of Books [LARB] about the new book and I wrote to him and asked for more information about the book and its genesis. He wrote back in internet time, one day later, and more than just a series of good and lively emails, he said he would send me a copy of the book by airmail, two copies in fact, one for me and one to give to some poets in Asia that I know. And now the book is on the display table at an indie bookstore in south Taiwan called COURAGE in its English signage. Local readers can read the book in the bookstore and chat about it with other readers at the coffe bar in the store, too. 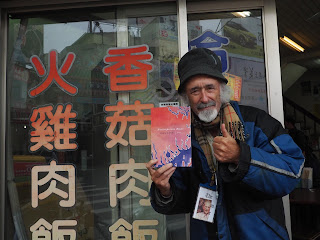 CAPTION:  Blogger Dan Bloom holding John's book outside a restaurant in south Taiwan on cold winter day when the temperatures went down to 25 degrees F., and with snow on the mountain tops of the Central Mountain Range of Taiwan which reach as high as 12,000 feet. Yes, cold winds and snow in subtropical Taiwan! Who knew? It's an ''Anthropocene Blues'' world out here, too.

Funny story and true. When the book arrived the other day at my home in Taiwan, the customs office at the local post office checked off the box that read ''DANGEROUS MATERIALS'' on the postage form. I loved and I told John. He got a chuckle from that, too.

Now to the book: ANTHROPOCENE BLUES John Lane's ANTHROPOCENE BLUES on display in an indie bookstore in Asia (Taiwan) at the COURAGE bookstore run by Mrs. Chen. [Photo courtesy of Dan Bloom inside the store.]

Read it one sitting or in several sittings, and listen to the voice of the poet John Lane ruminating on life in the Anthropocene. Later, in the comments below, tell this blogger which poem or poems resonated most with you. I am all ears. This book deserves a wide readership across North America, the UK and Australia. 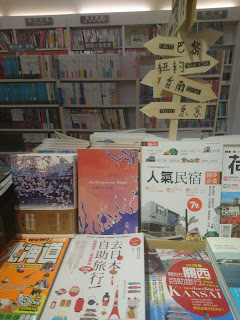 On Display in Taiwan bookstore now


It's a paperback, 62 pages, published by Mercer University Press in 2017. The fantastic interview with John at LARB is here. It's headlined"

READ IT HERE FIRST (or later if you prefer)
https://lareviewofbooks.org/article/our-cha-cha-toward-oblivion-kurt-caswell-interviews-john-lane/#!

The book has a very interesting and apt saying up front, from Hank Williams: "I'm so lonesone I could cry."
That's the Anthropocene for you, right? John series of poems are in his singular voice and the stories he tells in the poems and well worth the read. I devoured the book the afternoon it arrived at my home in Taiwan. I love every single page, every single poem, even the NOTES at the end.

Here I want to focus on just one poem that touched me. Titled THE GEOLOGIST LAMENTS LIMESTONE on page 28,  it's 12 grafs of verses tell an an interesting story, I asked John about it and he told me via email:

"I was sailing with my family in the Croatian islands. I have always loved Auden's poem "In Praise of Limestone" and the openness of it, and the way limestone and geology become a metaphor for culture and relationship in it. Yet my native geology is metamorphic not sedimentary. So sailing through the Croatian islands, limestone became the perfect medium to borrow for trying to describe how it felt to be foreign, to be floating through and over and just beyond another old culture that, for me, flaunted its impermanence through its geology. So there is some sense of unease, of nothing solid, of everything being soluble--a single life, a family, relationships, a culture, a time, all time. And yet, from the perspective of SC, Croatia is the end of Europe, the trailing edge of "the Old World." Growing up in my part of the "New World," a county of granite and gneiss, limestone always looks and feels temporary. Yet stone is stone. So there is both a beauty and lament to the poem. It's also a poem about a failed escape, the failure to "vacate." I never escape, I never turn the poet off. The poet actually becomes activated, sharpened, by foreignness. So there is somewhat of a critique of that here: that I am never on vacation, even on a sailing trip. (That comes up in other poems, too.) .....Much of this book is about this impermanence -- of language, even poetry, of landscapes, of cultures, of this time, of all time. That's part of this singing the blues. ''


This is how LARB's Kurt Caswell introduced his interview with John last year:


JOHN LANE’S newest book, Anthropocene Blues, is a collection of poetry that addresses the fate of humanity against the loss of species diversity and the terrifying planetary impact of climate change. Lane sings both in praise and in lamentation for the world we evolved in, and which we are now losing. He writes in “Voice, While it Lasts,” “you were born, your voice, his voice, / place and space and sound/like birds leaving a tree together.” In this cacophony, readers may hear the sound of humanity taking leave of the Earth; and in its wake is a tree — silent, bereft, still. After we are gone, the Earth will be all right, but the poet’s song, Lane seems to suggest, will be missing.
A professor of English and Environmental Studies at Wofford College in South Carolina, Lane directs the Goodall Environmental Studies Center, and is the author of more than a dozen books of poetry and prose. His most recent book of nonfiction, Coyote Settles the South, was a finalist for the John Burroughs Medal for Distinguished Natural History Writing, and his papers have been archived in The Sowell Family Collection in Literature, Community, and the Natural World at Texas Tech University, along with those of Barry Lopez, Gretel Ehrlich, Rick Bass, Bill McKibben, Annick Smith, Pattiann Rogers, and others.
A writer known for his range (Lane writes across genre), Anthropocene Blues brings together the sharpness of poetic form with the wandering music of the prose poem.
The interview was conducted via written correspondence in October 2017.