'This little planet' falling through space is ripe for 'cli-fi' novels in the next 100 years, and for Hollywood movies as well 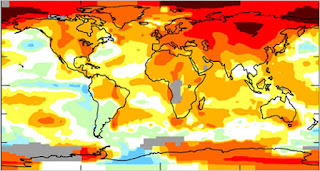 'This little planet' falling through space is ripe for cli-fi novels in the next 100 years, and for Hollywood movies as well. It's because we have only one planet we can call home, this little planet lost in space that in English we call the Earth. Other languages have other words for it: in Danish, jord; in Dutch, aarde; in Brazilian, terra' in French, terre; in German, erdwe; in Polish, ziemia.

And now, as novelists and movie directors contemplate the future of this little Earth of ours, a new literary genre has arisen and it's been dubbed "cli-fi" (short for ''climate fiction"). It's not science fiction, and it's not sci-fi. It's a new term and a new perspective: cli-fi.

So what is there to write about in the cli-fi genre? There's a lot to write about. Already, the Goodreads website has a list of some 200 cli-fi novels already published and being read and studied. An academic at the University of Oregon, Dr Stephanie LeMenager, is currently curating and archiving an even longer and more comprehensive list

Think about these next few paragraphs below:

'This little planet' falling through space, only 24 people have ever seen the Earth from afar. I'm talking about the 24 Apollo astronauts who went to the moon and were safely returned to this ''third rock from the sun'' again. Only they have ever seen the Earth as if from the perspective of space. Only they have seen the Earth as a sphere falling through space. Nearly all of them were struck by how fragile the Earth is. From space the Earth’s atmosphere appears as a thin blue line around the circumference of the planet, a penumbra of a 50 miles clinging to an orb some 8,000 miles in diameter.

“It is a pity,” Mike Collins, one of the American astronauts once wrote, “that my eyes have seen more than my brain has been able to assimilate.”

Of all the astronauts who left Earth orbit, he came closest to describing in words the sense and the feeling of what he had experienced: “The moon is so scarred,” he wrote, “so desolate, so monotonous, that I cannot recall its tortured surface without thinking of the infinite variety the delightful planet earth offers: misty waterfalls, pine forests, rose gardens, blues and greens and reds and whites that are entirely missing on the gray-tan moon.”

On his way back home, he looked out of the window and tried to find the Earth:

"The little planet is so small out there in the vastness that at first I couldn’t even locate it," he wrote later. "And when I did, a tingling of awe spread over me. There it was, shining like a jewel in a black sky. I looked at it in wonderment, suddenly aware of how its uniqueness is stamped in every atom of my body . . . I looked away for a moment and, poof, it was gone. I couldn’t find it again without searching closely."
'At that point I made my discovery. Suddenly I knew what a tiny, fragile thing Earth is," Collins wrote.