CLADE by James Bradley reviewed by Marc Hudson, and a great review it is! BRAVO!

REVIEWED BY MARC HUDSON on his blog
July 25, 2017 marchudson Leave a comment 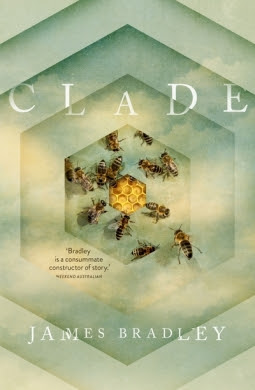 When – not if, but when – I reread James Bradley’s wonderful set of linked short stories, ‘Clade,’ I will be on the lookout for two things; his references to the seasons, and his imagery of flight (in every sense).
These short stories, which follow one family from about now, through roughly beyond the middle of the century, have the thread of climate change and its impacts running through them.  Contra Amitav Ghosh’s excellent ‘The Great Derangement,’ there are novelists willing and able to take on the big question of the 21st century (and the 22nd, should we get that far) – what will the world look like as the Holocene unravels/is unravelled by our actions and inactions over the last 70 years (see this from today).
The opening story starts, sensibly enough, in Antarctica, as a young scientist (Adam – the name may be overegging the pudding a bit?) takes samples and waits to hear from his artist wife in Sydney as to the latest bout of IVF.  Spoiler alert – it works, they have a child, called Summer.  And things go on, as they do.
The stories are linked, sometimes obliquely (think Hemingway’s Men without Women), sometimes clearly.  There is the obligatory pandemic, handled well, and other stories musing on bees, teenagers, astronomy, cancer and more.  Bradley knows what he is doing, as he dips in and out of lives. Sometimes the climate impacts are direct (as superstorm) sometimes they can almost be ignored as inconveniences (no more coffee).  Smells, tastes, memory, it all weaves together, as we follow Adam, Ellie, Summer and others through the decades.


“She nods, the spiced sweetness of the honey still burning in her nostrils. There is something fascinating about the idea of a substance that changes with the seasons in this way, a reminder of a time when the planet still moved in its own cycles.” (p118)

And these seasons (or lack of them) go beyond ‘permanent global summertime’.


“With the videos selected and sequenced, she turns to the other elements of the installation, allowing the project to absorb her, working long hours into the night. It is always striking to her how often these periods of creativity seem to be connected to the advent of spring, the strange timelessness of the warm evenings, although whether this is innate, a tic in the chemistry of her brain, or a habit ingrained during her time as a student, those formative years when the most intense periods inevitably coincided with the sudden explosion of spring, is unclear to her.” (p133)

This brings up two thoughts for me – I should re-read Julian Rathbone’s Trajectories, and I need to read some William Calvin…
If you had to quibble, you’d say that Clade (the word means  “a group of organisms believed to comprise all the evolutionary descendants of a common ancestor” occasionally falls into the ‘cosy catastrophe’ [warning: link to tvtropes] category – a term Brian Aldiss used to describe John Wyndham’s seminal novels, such as The Chrysalids, The Day of the Triffids and so on.  But that really would be a quibble – this is a very good book, one that can be read for the beauty of its descriptions, its well-drawn characters, or (as I am reading) as part of an exploration of the burgeoning sub-genre of ‘cli-fi’.
Posted by DANIELBLOOM at 11:33 PM