Cli-Fi and How Others See Us: some notes from the ''Cli-Fi Dept.'' at David Langford's "Ansible" sci-fi newsletter website 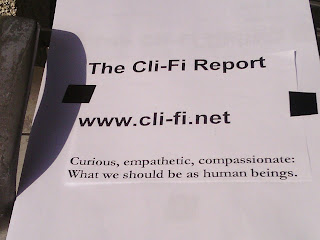 David  Langford runs Ansible here, a sci-fi newsletter in the UK that every so often runs an item called "Cli-Fi Dept" since 2015 and continuing into 2016 and beyond in the "What Others Are Saying About Us" on his website and it's fun. Hi David, Cheers, Dan.

*** As Others Assimilate Us. Yet again, an innovative "new" genre is proclaimed!
[QUOTE ] ''It's some time in
the not too distant future. The American Midwest has turned into a dust bowl.
Birds are dropping out of the sky.
Cities are encapsulated in domes so that people can breathe clean, if recycled, air.
Billions of refugees, victims of drought and famine, are on the move.
The streets are full of violent gangs and human traffickers.
Pandemics are breaking out. / Welcome to a new literary genre – climate fiction, or cli-fi.''
VIA (Truthdig.com, 26 December)
Because mere sf could never encompass any of these brave new concepts. [JB]

Welcome to a new literary genre – climate fiction, or cli-fi.' (Truthdig.com, 26 December)
Because mere sf could never encompass any of these brave new concepts, - JB...

"As Others See Us" Random Selector - Ansible

*** As Others See Us. Cli-Fi Dept. Some novels about climate change are
of course more equal than others:
[QUOTE] ''Many of the 70-odd books written up to the late 1990s were science fiction,
says Adam Trexler [who has made a list], and tended to treat climate change as one of several
problems rather than the main one. /
The pattern changed as growing numbers of notable writers began tackling the topic,
from Margaret Atwood (Oryx and Crake) or Michael Crichton (State of Fear),
Jeanette Winterson (The Stone Gods), Ian McEwan (Solar) and
Barbara Kingsolver (Flight Behaviour).' (Financial Times, 1 June) [MMW]
Poor J.G. Ballard was presumably too early an adopter to be notable for The Drowned World. Executive summary: 'Don't call it "science fiction". Cli-fi is literary fiction.''
The Christian Science Monitor headline, 26 April) [BT]

As Others See Us. Cli-Fi Dept.
Some novels about climate change are of course more
equal than others: 'Many of the 70-odd books written up to the late 1990s ...

As Others See Us. Forget boring old cli-fi!

As Others See Us. Forget boring old cli-fi! Here's the latest future-fiction category
that's untainted by sf. 'This future is only 13 years away, as Lionel Shriver depicts it in
"The Mandibles: A Family 2029-2047," her searing exemplar of a disquieting new genre –
call it dystopian finance fiction.'
(Ruth Franklin, New York Times, 11 July) [GF]

with two mentions of 'genre fiction' (but no examples) and none of sf. 'For [Amitavji] Ghosh,

keep the fluky and the exceptional out of its bounds, conceding

they bellow till we're sick. /

Answers from the author of Ansible in 2009 interview

David initially worked as a weapons physicist and later set up a software company (called Ansible) with fellow science fiction writer Christopher Priest.
He has won numerous awards for his writing and has been guest of honour at several international science fiction conventions.
Posted by DANIELBLOOM at 8:13 PM