Was New York Times book reviewer Michiko Kakutani ''photo-bombed'' in some of the farewell articles about her? Or not at all?


UPDATE: Guardian reader "robotdoggy" (comments now closed) posted in reaction to this photo in the Guardian too: ''Are you suggesting that the Guardian should have arranged a photo session with Michiko, Daniel Radcliffe and Warwick Davis and some special small furniture? Or maybe photoshop could have been used on the above image to make the two gigantic men smaller? Anyway, I sure when she reads your [post] she'll avoid being seen with tall people.''

UPDATE: NOTICE THE NY TIMES DID NOT USE THE ABOVE PHOTO IN SYDNEY EMBER'S FAREWELL ARTICLE TODAY BUT USED THIS INSTEAD:
https://www.nytimes.com/2017/07/27/business/media/michiko-kakutani-times-book-critic-steps-down.html 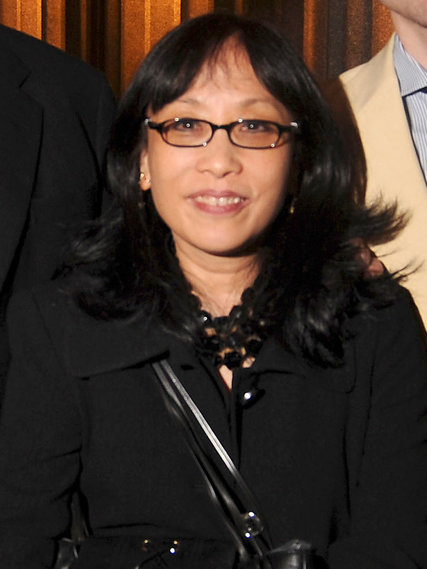 Can we talk? This is strange. When news was announced in New York and London that Michiko Kakutani﻿, the well-known book reviewer for the New York Times was leaving the newspaper after a 40-year career there and taking a buyout to free up her time to devote to long essays about politics and culture in a variety of publications, dozens of reports surfaced worldwide about her departure. And not just in English. The news went global in several lanagues, such is her reputation in literary circles around the world.


But what was strange was that the photo that the photo editors at both the UK Guardian ﻿and ''The New Yorker'' magazine ﻿chose to spotlight Ms. Kakutani in an old photograph showing her standing alongside Vanity Fair magazine editor Graydon Carter and his son Aaron Carter in which the two men tower over her and make her look very short in comparison. Was that photo chosen by the photo editors in London and New York in a kind of cheeky, mischievous -- to make Ms. Kakutani look small -- or was it just the best photo they could find in the rush to meet their online deadlines?


I asked several photo editors at newspapers and magazines in both the UK and in America, and while none of them wanted to go on record with a quote that mentioned their name, one editor not connected with either the Guardian or the New York said this: "It is a very unusual choice to make, given that it does make her look short in comparison to the two very tall American men, and given that there are literally dozens of other nice photos of Michiko online that they could have chosen from, it does appear a bit mischievous on the part of both those media outlets. I would not have gone with that photo. It was the wrong choice, even though it's a bright, colorful, lovely and complimentary photo that makes Michi look as beautiful as she really is. But the choice of that particular photo was an odd one. Kakutani is not short, she is not small, and the use of that photo does a dis-service to her. But welcome to the world of cheeky photo editors, on both sides of the Atlantic."


Speaking of the Atlantic, reporter Megan Garber at the Atlantic magazine also ran the same photo﻿. Did she choose it or did her photo editor out it in without her input?


So in the end, was Michiko Kakutani inadvertently photo-bombed by this photo with the tall Mr. Carter (born in Canada and emigrating to the U.S. when he was 28) and his son?﻿ Or was it just a nice photo that the two photo editors at the Guardian and the New Yorker chose as a matter of course to make her look good on the page?


Maybe later, the truth of how those two editors made their choice -- the same one, in turns out -- will come out through blogs and tweets and Facebook updates. But for now, it's a mystery.
Meanwhile, cue the music: Randy Newman wrote the comedic and satirical novelty song "Short People"﻿ that was a hit in years, past beginning in 1977, and here's a link to the YouTube version of the song with the lyrics, too.
The lyrics are here.
Posted by DANIELBLOOM at 7:55 PM