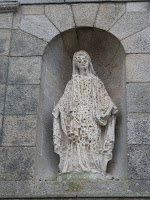 A chilling piece on climate change by New York Magazine journalist David Wallace-Wells﻿, a 35-year-old pony-tailed social activist from the famous Wallace-Wells family of Manhattan (Horace Mann feeder school grad and Dartmouth man, class of 2000,  equally brilliant and well-connected brother Benjamin writes for the New Yorker Magazine) ruined the weekend for a lot of people worldwide. Why? He spoke truth to power. He said the Emperor has no clothes. He didn't hold back.


This is what cli-fi novels and movies ﻿can do in the future, too, by telling stories about climate change and global warming, not as scientific propaganda or government charts and statistics, but as emotional, empathetic storytelling yarns about what we as humans might face in the runup to runaway global warming over the next 50 decades -- 30 ​

more generations of man. And woman.

So what did Mr Wallace-Wells say that got on everyone's nerves (but not on David Roberts' nerves﻿ and not on Susan Matthews nerves ﻿and not on Kevin Drums nerves -- and not my nerves at all﻿)?

Well, to begin with, according to climate activist Lindsay Iversen on Twitter﻿, his article ''furiously abandoned measured language and outlines the catastrophes that face humanity with various degrees of warming."

The article described, almost in a cli-fi way, ''flooded cities, dying crops, poisoned oceans, reanimated diseases, increased conflict, with each getting its day. The effect was terrifying."

Wells said. The truth, Mann argued, is scary enough. There is no reason to dress it up and invite criticism from Trump and America's huge army of climate denialists on the right. And there's some merit to what Mann said in his rebuttals of the New York Magazine piece, Iversen added.

​"The trick is to channel fear toward action rather than despair. But one thing is clear: what we're doing now isn't nearly enough," she concluded.

So this was the summer of 2017, not 2017 A.D. as in Anno Deus of the mythical
Christian god Jesus, but 2017 A.D. as in "Anno Donaldo," when all hell broke lose when Mr Wallace-Wells, a Jewish visionary, let loose with his ideas and research. The global climate disuccsion will never be the same.

But cli-fi novels and movies can serve to guide us in our confusion. Pay attention to the Cli-Fi Report﻿.

Posted by DANIELBLOOM at 7:20 PM