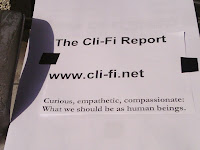 Steven G. Kellman, writing in the Texas Observer online newspaper, was the first literary critic to review climate activist Bill McKibben's debut cli-fi novel "Radio Free Vermont." Professor Kellman's review was out  a few days before the official pub date for the book on November 7, and somehow he got an early copy before everyone else did.


"Bill McKibben's 'Radio Free Vermont' is an activist's lark," the headline reads, with a subhead noting: ''Not so much plotted as rendered as a 'Hardy Boys' caper, [the comic debut novel] is a fond fantasy of liberal values."


You can read the entire review ﻿here﻿﻿.


Meanwhile, on the same day, November 3, veteran NPR radio producer Angela Evancie ﻿got the first radio "get" with McKibben, setting up a live interview with the author at her studio in Vermont.


Evancie, by the way, is the savvy reporter who first reported the rise of the cli-fi genre in her now-famous NPR segment from April 2013, more than 4 years ago. It was headlined: ''So Hot Right Now: Has Climate Change Created A New Literary Genre?'' See link below:


﻿
McKibben's novel imagines that an underground secession movement takes hold in Vermont.
Evancie spoke with the veteran climate activist who co-founded the 350.org, and put the chat on air here﻿, saying by way of introduction that McKibben's fanciful vision for his first-ever novel -- his ''climate fiction'' debut! -- ''involves a lot of [ Vermont] craft beer.''


McKibben normally publishes terrifying articles and books about climate change, Evancie noted, adding that his 1989 non-fiction book "The End of Nature" was a book has reached millions of readers worldwide over the last 25 years. "But this month he’s out with a work of fiction: a fanciful new book called 'Radio Free Vermont: A Fable of Resistance,'" she said, with an emphasis on the word "fable."


"It must be said, I’m a first-time novelist, and parts of this book are drawn fairly directly from my life, the love of Vermont beer chief among them,” McKibben said during the interview, his first anywhere in the world for the new book. "I actually don't think that we’re ready to secede and go our own way, but I do think that we’d do just fine in the beer department were that to happen."
According to Evancie, ''Bill’s book is about a boozy underground secession movement led by a man named Vern Barclay. The book is quirky and fun and there’s a chase scene involving snowmobilers and Nordic skiers. In this passage, the idea of Vermont as an independent nation is starting to take hold around the state.''


Bill told the radio producer he felt drawn to the topic after last November’s USA presidential election in 2016 when Donald Trump got the nod, in a controversial Electoral College system win.
"Well, I actually had been working on the book for a long time, in little pieces here and there. It was after the dawn of the Trump Era that it seemed to make sense to kind of finally bring them all together and publish it," he explained.


But in Bill’s book, the political idea of resistance is deeply intertwined with the more basic idea of self-reliance: local economies, small-scale governance, according to the NPR reporter.
"I've always been extremely interested in the idea of a more localized economy," he told her. "For me, that's more fun than ideology, really."


McKibben's debut cli-fi novel imagines that an underground secession movement takes hold in Vermont. It's a comic caper, a fable and even a farce, and a witty, humorous response to the life in the Trump Era, especially in regard to the liberal state of Vermont, where "anything goes."​

“Is it a surprise that the debut novel from one of our best-known environmental activists focuses on grassroots resistance? In backwoods Vermont, two radicals use an underground radio show to recruit people interested in seceding from the United States. What follows is a zany, witty, and altogether timely imagination of modern resistors.” – The Millions

“rollicking…With a playful and quick-moving plot that belies the seriousness of the book’s environmental and political message, McKibben’s stirring call for recognizing the value and power of smallness in a globalized world makes for a vital and relevant fable.”  –Publishers Weekly
“In a time when smart comedy is essential to survival, McKibben’s shrewdly uproarious and provocative fable of resistance is exhilarating.” –Booklist (starred review)

“Only Bill McKibben could set out to write his first novel and produce an addictive caper loaded with craft beer, contract spies, and chase scenes on cross-country skis! This is James-Bond-meets-A-Prairie-Home-Companion and no one but McKibben could pull it off. He does it with such heart, grace, wisdom and fun that I just couldn't put it down. A story as outrageous as our times.”
–Naomi Klein, author of The Shock Doctrine

"What a delicious pleasure to read Radio Free Vermont - a weird and utterly joyous if sometimes hair-raising romp through the dark Wonderland of life under Trump. Bill McKibben is a brilliant storyteller, and I love this book, which is balm for our troubled times."
–Jay Parini, author of The Last Station

“I hope no one secedes, but I also hope that Americans figure out creative ways to resist injustice and create communities where everybody counts.  We've got a long history of resistance in Vermont and this book is testimony to that fact.”
–Bernie Sanders
Read more

Bill McKibben is an author and environmentalist. His 1989 book The End of Nature is regarded as the first book for a general audience about climate change, and has appeared in 24 languages; he's gone on to write a dozen more books, including Eaarth and Oil and Honey. He is a founder of 350.org, the first planet-wide, grassroots climate change movement, which launched the fast-growing fossil fuel divestment movement. McKibben lives in Vermont.
Posted by DANIELBLOOM at 8:25 PM