By staff writer and agencies
SEE THESE LINKS ALREADY ONLINE BELOW:

Can 'Cli-Fi' Save the Planet?
https://lithub.com/can-science-fiction-save-the-earth/

PS: Bill McKibben on cli-fi -- Bill McKibben has long
advocated since 2005 in a Grist essay and
again in 2009 in a similar Grist essay for more
people to use ''the power of art'' to tackle climate change.
“I wrote a piece maybe 15 years ago [in 2005 and 2009]
arguing that there had been very limited literary or
artistic response to climate change, which
was odd given the scale and magnitude,” he says. “And I’m
very glad to see that changing now in 2018 on every front.”
One group of artists who has tackled climate
change is ''climate fiction'' writers, with authors
like Kim Stanley Robinson, Paolo Bacigalupi, and Tobias Buckell
comprising the so-called “cli-fi” movement.

In particular McKibben praises Kim Stanley Robinson’s
novel ''New York 2140,'' which depicts a future in
which rising seas have transformed New York
into a city of canals. “For my money the best climate fiction—
and in many ways the best fiction—of the last year was
New York 2140,” he says. “It’s a wonderful and
oddly cheerful book, I must say. I really, really enjoyed it.”

Publishers have faced a vexing question in recent years:
As newspapers’ book coverage shrinks and fewer people shop
in brick-and-mortar bookstores, how might
publishers open a conversation about cli-fi novels with readers
online, without getting lost in the digital sea?
Grove Atlantic President and Publisher Morgan Entrekin
has taken a crack at it. He, along with a broad group
of publishers, literary magazines and booksellers, has developed
a website styled as a Huffington Post for the literary world:
a one-stop shop of bookish cli-fi novel aggregation. 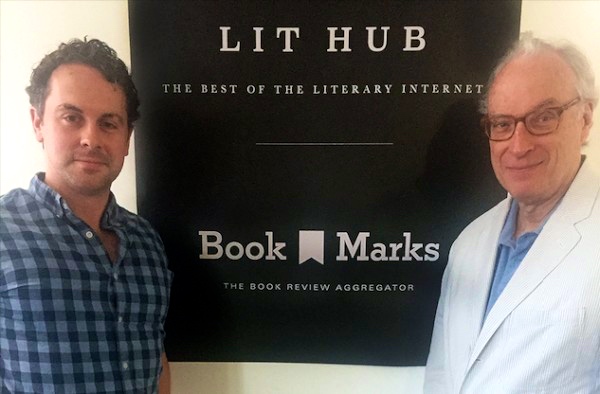 Dan Sheehan and Morgan Entrekin
More than a decade ago, Morgan Entrekin, the publisher of Grove Atlantic, had a vision: to make a Huffington Post for the book world. Then Bookish came along, he said, and he thought, “Cool. They’re going to do that, and so I don’t need to.” But when Bookish failed, Entrekin revisited the idea, calling on longtime friend, veteran journalist, and magazine editor Terry McDonell to partner with him on the project.
That project, Literary Hub, which launched in 2015, has since become one of the premier literature-focused sites on the web.

Morgan Entrekin launches Lithub.com
by Kirsten Reach
Rounded bookshelf
Via Shutterstock
The next Bookish is here. Well, something between Bookish and the Paris Review Daily.

As a Wall Street Journal report details, Grove Atlantic has created a new website for critical essays and reviews called The Literary Hub, which will launch on April 8. The company is partnering with seventy others, including New Directions, FSG, and Melville House (hey, we’ve heard of them) to provide one source for literary content.

The project is the brainchild of Morgan Entrekin, president and publisher of Grove Atlantic. The site will commission some work of its own, including critical work, reviews of bookstores, and maybe even book reviews. The editor-in-chief is Jonny Diamond.

As Jennifer Maloney reports in the WSJ story, LitHub will be “a website styled as a Huffington Post for the literary world—a one-stop shop of bookish aggregation.” One-stop shops are great. They bring to mind regionally beloved businesses like Wawa or Sheetz, right? Everybody likes a gas station that will make you mac and cheese.

So it’s kind of like My Independent Bookshop meets Scribner Magazine meets… blah, blah, blah. There are a million sites out there to recommend content. These are smart publishers; we’ll learn more about what separates their editorial vision from other sites that came before this one as soon as they start publishing.

The Literary Hub website, which was conceived by Morgan Entrekin, president and publisher of Grove Atlantic, and Terry McDonell, the former editor of Sports Illustrated and Esquire, went live yesterday (Wednesday 8th April). Its motto is “Read to live” and it features a mix of content contributed by partners and original material, including author interviews, features, excerpts, and essays. It is working with more than 65 partners, including Knopf/Vintage, Scribner, Little, Brown, PRH's Penguin Books and Penguin Press, Ecco, Melville House and many more publishers. PEN, the Paris Review and bookstore City Lights are also listed as partners.

Electric Literature developed and designed the site, and is helping craft its editorial and outreach strategies.

Andy Hunter, co-founder of Electric Literature, said: “When Grove came to us with the idea, we were attracted to its optimism. Lit Hub supports the whole ecosystem that literature needs to thrive, from the writers, to the publishers, to the bookstores, to the readers. Our cultural conversation happens online now, and literary culture needs to play an important part. That’s Electric Literature’s mission, and Lit Hub fits.”

Listening to Morgan Entrekin is a shot of adrenaline for anybody concerned about literary culture. “Independent publishing is the healthiest I’ve ever seen it,” said the president and publisher of Grove Atlantic, who recently passed 60 like a marathoner in the third mile.

Far from planning his retirement, he’s about to launch his most ambitious project ever: Literary Hub, a new Web site that attempts to bring together everything literary on the Internet. After more than a year of a planning, LitHub.com will go live on April 8, and Entrekin is determined to position his new site as salvation rather than competition for the numerous literary Web sites already grasping for eyeballs.

“We need this. Literary culture needs this,” he told the board members of the National Book Critics Circle last week in New York.


Billed as a “go-to daily source for all the news, ideas, and richness of contemporary literary life,” Literary Hub promises curated and original content such as interviews, profiles and essays. Grove staff members are now following more than 200 Web sites, looking for material that could be used.

The site is being developed in partnership with Electric Lit, whose co-founder, Andy Hunter, was also on hand at the NBCC luncheon, along with Literary Hub’s editor-in-chief, Jonny Diamond, and executive editor John Freeman.

When he started planning this project, Entrekin had hoped to get 25 partners, but he’s signed on more than 100 so far, from publishers to journals, everybody from Akashic to ZYZZYVA, including big names such as Knopf, FSG, Simon & Schuster, Penguin and Houghton Mifflin Harcourt. These partners will provide content and book excerpts — possibly in exchange for ad space on the site. Dozens of booksellers, including Washington’s Politics & Prose and Amazon, have already joined or expressed interest. (Amazon chief executive Jeffrey P. Bezos owns The Washington Post.)


Entrekin estimates that three-quarters of the material on Literary Hub will be produced by others — and he’s ready to pay for original content. Jane Smiley and Russell Banks are among the well-known writers who have submitted pieces. Additional content will come from 15 “national correspondents,” essentially stringers who work in bookstores or follow the publishing scene in their regions. The site will also include a calendar to keep track of the literary conversation across the country and periodic updates from major cities in Europe, e.g. “Letter from Paris,” “Letter from Milan.”

If that scope sounds omnivorous, Entrekin is quick to note that his site is strictly “focusing on literary books.” No genre lit — no romance, no science fiction. He wants to avoid the fate of Bookish, that much-hyped, soon-fizzled Web site originally backed by several major publishers. “One of the reasons that Bookish failed,” he said, “is that they tried to cover too much.”

And there’s something else you won’t find on Literary Hub: book reviews. “We’re not doing reviews,” Entrekin tells the book reviewers at the NBCC luncheon. “Because this is being built by publishers, there were too many potential conflicts.”


That desire to avoid conflicts sounds like a guiding principle of Literary Hub. “We’re not selling books,” Entrekin noted. “The moment you start selling books, you alienate one of your major stakeholders: the independent booksellers.”

Which raises the mystery of the site’s revenue model, but Entrekin laughs that off. “We aspire to break even — maybe,” he said. He’s looking for a site sponsor, but he said, “This is coming not from a desire to make money but from a desire to save what’s valuable about literary culture.”

Not making money will be easy. Saving literary culture is a tougher challenge. But Entrekin has never shied away from that.