As the cyclical natural phenomena that affect our planet’s climate amplify the effect of human-made ''global warming,'' publishers and literary agents call for more cli-fi novels and movies to mirror the Earth system events that are unfolding now

The world is likely to see more extreme temperatures in the coming 40 years [2018-2060] -- to be accompanied by more and more cli-fi novels and movies to mirror reality -- as natural warming reinforces human-made climate change, according to a new global forecasting system.
To find out what people on the publishing industry think about cli-fi and its recent rise as a global literary genre in several languages, we asked a group of movers and shakers in the book industry in New York, London and Sydney what the prospects were, in their opinions, for the continued popularity of cli-fi novels and movies.
“There is a high possibility that we will be at the peak of cli-fi novels and movies for the next four decades at least,” said Astrid Markham, a prominent American literary agent based in London.

Want to know more? Ask these people quoted here yourself if you want to know more about how they view the rise of cli-fi in their industry and whether they are warming up to the new genre in the 21st century, or, if they still remain a bit cool to it all.
“If the warming trend caused by greenhouse gas emissions continues, years like 2018 will be the norm in the 2040s, and would be classed as cold by the end of the century,” according to James Renick, a climate scientist in New Zealand.
Enter cli-fi, stage left.
Ellen Centerman, CEO of Aquarius Books in Sydney, said: "Sure, I have hear about the cli-fi term, and like sci-fi, I think such novels (and their movie adaptations) have a big future over the next 40 years. Barbara Kingsolver's Flight Behavior was a fantastic cli-fi novel, without being preachy or lecturing readers. It was just a wonderfully-written and executed novel. I expect to see more such novels in the future. I'm all for them. Bring them on! I've told my acquring editors and PR people and marketing department here in Australia to get ready for the rise of cli-fi in the publishing industry. Such novels will make reading popular again among young people."
Bob Marcus, an acquiring editor for Somesuch Books in London, an indie operation, said: "Cli-fi? It's a new term for me, but I like the sound of it and I like what it stands for. I am looking for intelligent literary fiction for my imprint, and if an agent or an author pitches me with a good cli-fi story, I will be there for meet them for lunch and sign a contract. These will be 21st century novels. With reviews in the New York Times and the Guardian. Even Hillel Italie at the Associated Press will write about these cli-fi novels and interview the authors for his always-interesting wire stories."
"Big Ed" Rosenberg, a top literary agent in Manhattan told us: "They call me 'Big Ed' in Manhattan, not such much because of my girth or my height, but because I have a big heart and I value empathy. It's how I was raised in Boston. So I am in the marrket for cli-fi novels, of course, and with our rights department, I am also interested in selling the movie rights to Hollywood producers like Brad Pitt and Leonardo DiCaprio and Marshall Herskovitz. Books to movies is part of  my business and I see cli-fi as a bright spot in the future. Just as Jeff VanderMeer's novel "Annihilation" was sold to Hollywood, I can see the same future for well-written well-plotted cli-fi novels. Jeff was a trailblazer. He is leading the way. I love the guy. Met him a few times in New York, too. We have friends in common."
Barbara Narjaram, a PR person at Jinsum Publishers in New York said:: "I never heard of cli-fi until you mentioned it. It is a new genre or something? Sounds like sci-fi but with the added value of a climate theme. We can do amazing thing with this genre in the PR world, and given the the way the world has been heating up the past ten years, or more, cli-fi is a perfect match for what ails us. If the authors are willing to do the promotional tours, and visit bookstores as part of the cli-fi promotions, I am all for it."

Daniel-Jean Bertin, who runs the marketing department for the French publisher Asterix Plus, said:: "Whatever the boss says, we can do. We have been marketing sci-fi novels for years and we know the market. So with cli-fi novels grabbing a piece of the public's mind now, we can do the same thing with cli-fi. It's a natural in this age of the Anthropocene. It's a long word but I like it. I can work it. I can work with cli-fi. Send them to me!"
Joan LeBoeuf, who is a noted literary critic in the London, said: "It's too bad that Michiko Kakutani is no longer at the New York Times as a book reviewer, she would be a good person to look at the rise of cli-fi and explain it all for us. But in the meantine, there are plenty of others out there in the book world who can explain cli-fi to readers. In fact, Alexander Kaufman recently referred to Kim Stanley Robinson as "the godfather of cli-fi." That's quite a statement. He wrote that in the Huffington Post."

Steffan Fennander-Knowles, who runs the bookstore display department for Foyles in the UK, puts it this way: "I work at Foyles here in London, and  one summer we put up a cli-fi display table, and it was an eye-catching attraction. Media reports picked up the photo and it went worldwide via social media. Waterstones in the UK also did a cli-fi display recently with very good results. So bookstores are getting into the act as well. It's good for business. It's good for books." 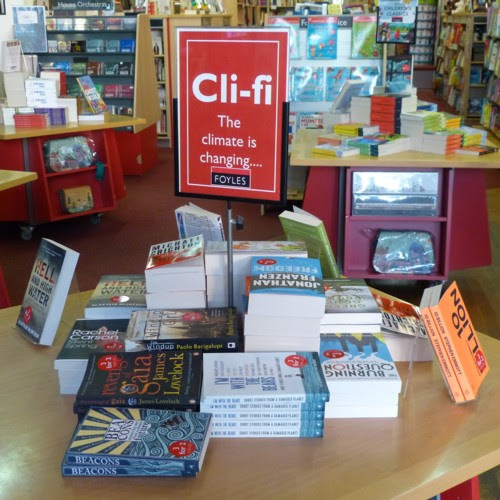 Michelle Ashekanzi is the bookstore buyer for a major retail chain in Australia and she says:  "If they publish more cli-fi books and the novels get noticed, we'll order them. It all starts with the publishers and the book reviewers and the literary critics. We will see. I'm optimistic."
Jannifer Mercredit is a sci-fi novelist in South Africa, and she tells us:: "Count me in. Publish my new cli-fi novel, get me an option for a movie, and I will promote the heck out of it. I will go anywhere for my book. It's more than about my career, it's about the fate of the Earth. My novel is optimistic and full of hope, so I think people like Bill McKibben and Katharine Hayhoe will get behind it. too. Cli-fi doesn't have to be depressing and dystopian to sell well. We need positvie stories too. Margaret Atwood coined a term I like -- ''ustopia'' -- for novels that a hybrid of dystopia and utopia."
Sally Flood, am editor who works at a major British trade magazine for books says: "We're the trade magazine of the book industry here in the UK, and if we say a cli-fi novel is worth reading, readers will follow. I'm all for it. Of course, there might be others who say they are "not interested" in cli-fi, for various reasons, but  remember that in the beginning the sci-fi genre faced an uphill battle in gaining recognition. Cli-fi can rise to new heights, I am sure."
Book maven Pilita Clark way back in 2103 -- 5 years ago! --put it this way at the FT in London and said: ''The literary world already has plenty of genres, but as the Arctic melts, the planet warms and carbon dioxide levels reach their highest point in human history, a new class of fiction has been added to the list: climate fiction, or cli-fi.''
And now it's 2018. What would Pilita Clark say now? We'd love to hear from her.

Posted by DANIELBLOOM at 9:11 PM

YOUR POV? reply in comments below. a friend tells me today -- It's always tough to get your finger on the pulse of the book industry until after the fact, but ultimately they want to publish what sells, so if Kim Stanley Robinson writes more cli-fi novels, or if Neal Stephenson wants to do a cli-fi opus, those books will certainly get published.

Having said that, from the trenches as a writer in the field, it certainly seems to me like there is less pure cli-fi getting written and published. I think the lack of new cli-fi has more to do with our current political climate than any aversion to cli-fi. Please note that in order to combat the prevalence of conservative "populist" ideologies—which are at their root racist, sexist, and homophobic—the sci-fi community at large is moving towards inclusivity and representation of marginalized voices in the genre.
We're still seeing some cli-fi settings in scifi and SF/F work, but for the time being at least, the cli-fi elements are more of a backdrop and less the driving-force of the stories. Another factor could be the fact we're already starting to live the reality of climate change. Personally, I had to scrap my near-future cli-fi novel I was working on because the future caught up with us too quickly!