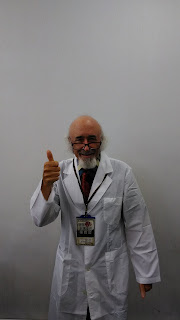 Danny Bloom (born in 1949) is an editor at The Cli-Fi Report. He was previously editor and staff reporter at the Capital City Weekly in Alaska in the 1980s, the Daily Yomiuri (now Japan News) in Tokyo in the 1990s, and the Taipei Times in Taiwan in the late 1990s and early 2000s.
He is best known for coining the cli-fi term as a PR tool and wake up call for novelists, literary critics and newspaper headline writers. Hee also in 2018 coined the eco-term speciestalgia.
Danny grew up in Springfield, Massachusetts in the 1950s and 60s in a warm and literary (and musical) household, with three sisters and an older brother. His father was a local plumber (that is to say, a urologist) and his mother was a former Boston nurse who married a doctor during World War II and went on  to create a family of very happy campers who have all sailed the seven seas.
Bloom graduated from Tufts University in 1971 with a degree in modern literature and later attended Oregon State University in Corvallis while working on a masters degree in communications and serving as a graduate teaching assistant.


He is the author of a children's picture book published in 1985 after a New York Times feature article about him led to a NYC literary agent contacting him for a book deal with a major publisher. He was flown in from Alaska for meet with the publisher and editors and sign the contract. The book is still in print and titled ''Bubbie and Zadie Come to My House.''

As our world continues to change and various species disappear, our vocabulary adapts to these changes, writes Dan Bloom with #speciestalgia